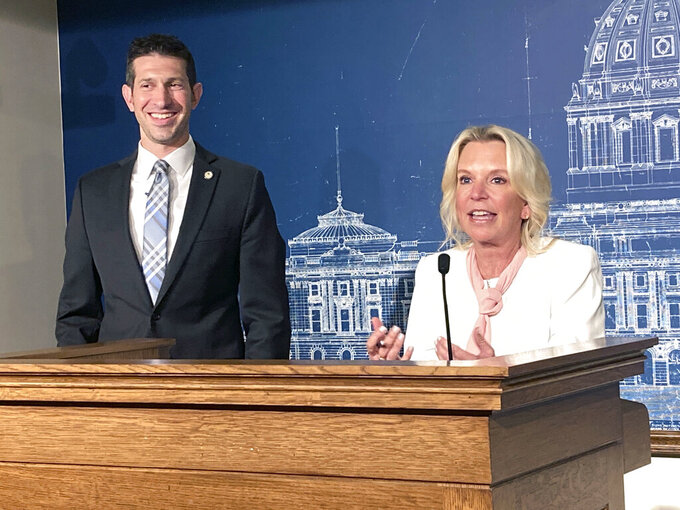 ST. PAUL, Minn. (AP) — An effort to ban “conversion therapy” for LGBTQ youth won a majority in the Republican-controlled Minnesota Senate on Thursday, but it didn’t get enough votes on a procedural maneuver to advance to a full debate on the bill's merits.

With little advance warning, Democratic Sen. Scott Dibble, of Minneapolis, tried to pull his bill out of a committee, where it has languished for two years without a hearing, and tee it up for a Senate floor vote. The vote was 34-31, but that was short of the required 41 votes under Senate rules.

A ban has passed the Democratic-controlled House. Dibble has been unable to get it through the Senate, but he said Thursday’s procedural vote shows that a majority of senators would pass the proposal on its merits if their leaders would give them the chance.

Sens. Karin Housley, of Stillwater, and Zack Duckworth, of Lakeville, broke with their fellow Republicans to support Dibble's effort, as did Sen. David Tomassoni, an independent from Chisholm who caucuses with the GOP.

Only Democrats who joined with Dibble in trying to force the issue, which he called “an urgent matter whose time has come,” spoke during the debate over the bill. Dibble called conversion therapy “a barbaric torture” that demeans and dehumanizes LGBTQ youth, raising the risks of suicide.

Flanked by Democratic colleagues, Dibble said at a news conference that his “heart is broken” on behalf of young people who will continue to suffer, “but I'm encouraged because now we've shown we have momentum and we have the votes to pass a measure like this.”

Around 19 other states and several Minnesota communities have banned conversion therapy, which seeks to change the sexual orientation of those undergoing it to make them straight. The American Psychological Association says it’s not based on science and is harmful to a participant's mental health.

Conservatives who oppose a ban frame the issue as one of religious freedom and the rights of parents to decide how best to raise their children.

“It is incredibly frustrating to know that we have the votes to pass this measure, and through sheer procedural cowardice, the Republican majority continues to block it,” said Democratic Sen. Lindsey Port, of Burnsville.

Republican Senate Majority Leader Jeremy Miller, of Winona, told reporters that the issue was one with “some areas where we could find agreement" if proponents would negotiate, but “right now it's just not something that's ready in its current form.”