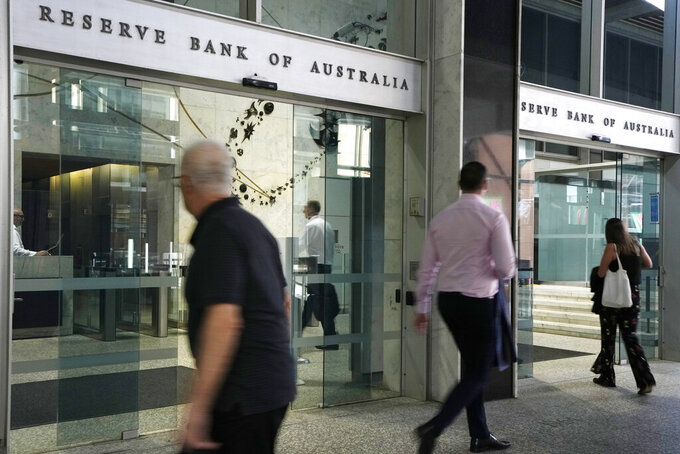 Rick Rycroft, ASSOCIATED PRESS
People arrive at the Reserve Bank of Australia in Sydney, Tuesday, Dec. 6, 2022. Australia's central bank has raised its benchmark interest rate by a quarter-point to 3.1% as it continues to battle inflation. (AP Photo/Rick Rycroft)

WELLINGTON, New Zealand (AP) — Australia's central bank has raised its benchmark interest rate by a quarter-point to 3.1% as it continues trying to wrestle down inflation.

The increase was the bank's eighth in a row and took the rate to its highest level in 10 years.

Still, Australia's rate hikes have remained relatively modest and its key rate remains lower than in many other countries including the United States, where the Federal Reserve has raised its key interest rate to a range of 3.75% to 4%.

Reserve Bank of Australia Governor Philip Lowe said inflation remained too high at 6.9%. That's well above the bank's target inflation rate of between 2% and 3%.

“Global factors explain much of this high inflation, but strong domestic demand relative to the ability of the economy to meet that demand is also playing a role,” Lowe said in a statement.

He said inflation is expected to keep rising to 8% in the current quarter before falling next year.

“The board remains resolute in its determination to return inflation to target and will do what is necessary to achieve that,” Lowe said.

He said the bank is forecasting the nation's economic growth to moderate to about 1.5% next year and in 2024.

The bank noted the labor market remains tight, with unemployment at 3.4% in October — the lowest rate since 1974 — and many firms struggling to hire workers.

Lowe said the bank's board expected to keep raising rates but it was not a pre-set course, and the size and timing of rate hikes depends on incoming data.

The rate increase was widely expected by economists and Australia’s dollar was little changed on the announcement, trading at around 67 U.S. cents. The benchmark S&P/ASX 200 fell 0.5%.

Australia's economy has advantages but also is subject to forces beyond its control, such as the war in Ukraine, Treasurer Jim Chalmers told reporters.

“These interest rate rises are already having harsh and heavy consequences on a lot of household budgets and on a lot of mortgage repayments," Chalmers said.