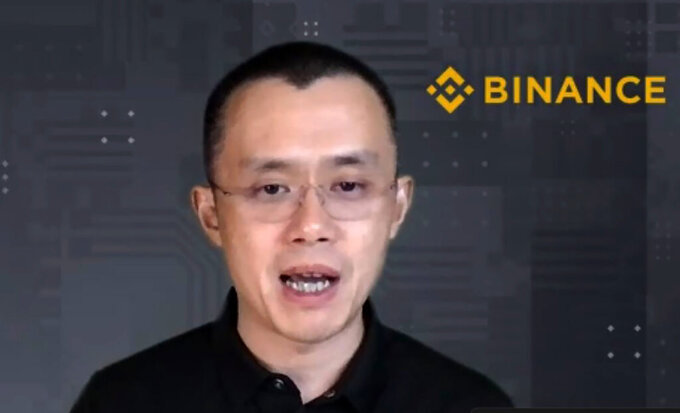 Uncredited, ASSOCIATED PRESS
Binance CEO Changpeng Zhao answers a question during a Zoom meeting interview with The Associated Press on Tuesday, Nov. 16, 2021. Binance is the world’s largest crypto exchange and hosts tens of billions of dollars’ worth of trades every day. It’s calling for a global regulatory framework for crypto markets. (AP Photo)

NEW YORK (AP) — The CEO of Binance, the world's largest cryptocurrency exchange, doesn't try to explain why some cryptocurrencies that started purely as a joke have surged so much in price.

He also doesn't want to say if the exuberance for meme coins like Dogecoin is an indication of a dangerous bubble. But Changpeng Zhao, who goes by “CZ,” does say that it shows the power of decentralization, which has underpinned the huge growth for crypto.

Led by Bitcoin, cryptocurrencies have swelled in value to more than $2.6 trillion, putting them on par with the world's most valuable stock, Microsoft. Such fast growth is drawing in more investors, as well as gaining the attention of regulators around the world.

Zhao spoke with The Associated Press after his company issued a call for more regulation of crypto markets around the worl d. Besides bubbles and meme coins, he talked about which cryptocurrencies he owns and his promise to donate most of his wealth. This conversation has been edited for clarity and length.

Q: What’s your takeaway when cryptos that started as a joke are soaring in value?

Zhao: To be honest, I don’t get Dogecoin. But this shows the power of decentralization. What I think may or may not matter. If a large enough number of people in the community values it because it’s cute, because they like the meme, then it has value.

And Dogecoin has lasted so many years. It's gone up and down, up and down, but it’s lasted. And now we have Shiba, which is also a meme coin. We have a lot more meme coins. But guess what? For something to be valuable, you only need one other person to want to buy it.

For something to have liquidity, you need a large number of people to want to buy it or sell it. Once you have liquidity, a thing has value, according to the neutral market. So it’s not up to me to judge it.

As a platform, we want to provide a marketplace for all the relatively valuable cryptocurrencies in the world.

Q: When people buy things only because the next person will buy it, isn’t that a sign of a bubble?

Zhao: To some extent, yes. But it’s not a black and white thing.

There’s no clear definition of what a bubble is. If an asset's price drops more than 80%? Bitcoin dropped more than that and then recovered. Amazon dropped (more than 90% from the start of 2000 into September 2001), and now they are one of the most valuable companies in the world. Did it go through a bubble? According to most laymen’s definition, it probably did. For Jeff Bezos, he would probably disagree.

What’s important is there are high fluctuations. As long as people understand what they’re holding, what the risks are, then that’s OK.

Q: Why are crypto prices so volatile, shooting up and down so fast?

Zhao: For the mass consumers, the first thing I would want them to understand is that everything is volatile.

You have to park your value somewhere. It could be a house, it could be stock, it could be U.S. dollars. But all of those things fluctuate against something else.

Crypto has high volatility because it’s a relatively smaller market. It’s much, much smaller than traditional assets. The larger the market value one’s asset is, the smaller the volatility. That’s just math.

Let’s say you look at a small coin with a total market value of $10 million. If somebody tried to use $1 million to buy the coin, the price is going to go up much more than 10% because not everybody is selling that coin. If you look at a $100 trillion asset market, putting in $1 million is not going to move the price at all

Q: Is that volatility the biggest barrier keeping people out of cryptos today?

Zhao: Today, in the crypto space, there are a lot of active traders. There’s a large number of people who are in this industry for investment gains or speculative trading, and those guys actually prefer volatility.

I actually think the biggest factor blocking or hindering the growth of crypto is ease of use. Today it’s quite difficult to hold your cryptocurrency in a secure way, meaning that if your computer breaks or if your computer gets a virus, your crypto is still safe. If you lose your computer, or if you lose your crypto wallet device, you can still get it back. And that means you have to have backups and the backup needs to be secured. They cannot be stolen. And the last part that many people don’t think about is: What happens if you go away? People die. If you suddenly become unavailable, can your kids get it? How do they get it? Are there ways to guarantee they will get it and that they’ll get it only after you die?

There aren’t very good tools to handle all of those aspects. Centralized exchanges offer one solution: We hold custody of people’s coins. (But) how to securely hold your tokens is a fundamental limitation factor. We have not provided easy-enough-to-use tools that are also secure enough today. But I think as the industry evolves, things will get better.

Q: How do you personally invest your money?

Zhao: I actually don’t do much investment. I’m one of those really bad examples to follow for most other people.

I bought some Bitcoins in 2014. I spent a little bit of it over time, but I held onto most of it. I did not sell.

The other asset I hold, which is the majority of my net worth, is BNB (Binance coin). Personally, I don’t hold any other coins. I am a decent sized shareholder in Binance, if we ever want to realize the equity value someday.

I personally do not own equity in any other project, crypto or not crypto. I do this very deliberately because I don’t want any potential conflicts of interest. So I’m very, very not diversified, which I actually do not recommend to most people.

But for me, I can take the risk. As long as I don’t do anything unethical — even if something happens to Binance, and we don’t make it, and if I say I’m going to do another project, I believe my credibility is there for other people to invest a lot of money.

Q: Crypto seems so divisive, where people are either fervent believers or think it’s worthless. Will it always be this all-or-nothing thing?

Zhao: For the last few years, it’s this bipolar thing. There’s a small group of guys who are diehard crypto fans, and then there’s a majority of people who don’t even know what crypto is. But as more and more people get into crypto, we see that middle ground.

I talk to a lot of athletes who are now looking at NFTs (or non-fungible tokens, which use the technology underpinning crypto to create unique digital collectibles). They now realize the value of this. They may not be a diehard crypto fan, but they also are not super skeptical about crypto anymore.

Even governors of central banks, when I talked to them a year ago, they were very skeptical. But now when I talk to them, they say, “We need this to grow our economy.” But they still have concerns about certain aspects of crypto.