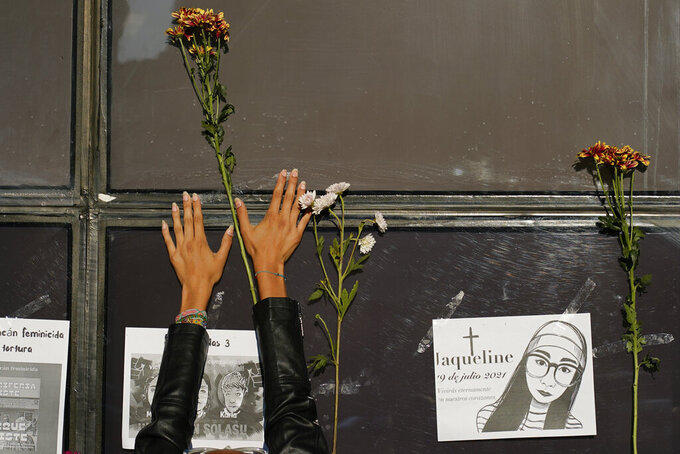 Eduardo Verdugo, ASSOCIATED PRESS
A woman places a stem of flowers on the facade of the Attorney General's office during a protest against the disappearance of Debanhi Escobar and other women who have gone missing, in Mexico City, Friday, April 22, 2022. The protest against femicide was triggered after Escobar's decomposing body was recently found in a subterranean water tank at a motel when workers reported foul odors coming from the water holding tank. (AP Photo/Eduardo Verdugo)

MEXICO CITY (AP) — As Mexican investigators struggle with the so-far inexplicable death of an 18 year-old woman, the odds of an answer are slim: Even nationally significant homicide cases — like nearly all homicide cases in Mexico — tend to wind up as mysterious as the 1975 disappearance of U.S. union boss Jimmy Hoffa. Poor evidence handling, intentional distortion of investigations, cover-ups, political interests and just plain incompetence often leave the public without complete answers. Surveys by Mexican think tanks say roughly 90% of homicides go unpunished in Mexico.

In the latest case, Debanhi Escobar left a taxi in the northern city of Monterrey on April 9 and the taxi driver took a photo of her standing alone on the side of a highway. Her body was found in an underground water tank at a nearby motel on April 21. An autopsy found she had been dead for between five days and two weeks. She had no water in her lungs and the autopsy found she had been alive when she entered the tank, where the water was 3 feet high and the medical examiner said she could have stood up. The cause of death was a blow to the head. Her handbag was found in an adjoining water tank, and her keys and cellphone were found in another. Her disappearance drew national attention. Authorities have made no arrests.

Many other notorious cases have gone unsolved — at least in the public's mind — for years or even decades:

Roman Catholic Cardinal Juan Jesus Posadas Ocampo was killed by 14 shots fired at short range on May 24, 1993, while he sat in his car at the airport in the city of Guadalajara. The government said drug cartel gunmen mistook the cardinal’s luxury vehicle for that of a rival drug trafficker. But church authorities believe Posadas Ocampo, who was wearing clerical clothing, was killed because he knew about relationships between drug dealers and government officials. While some of those implicated were charged with weapons or drug offenses and acknowledged participating in the slaying, nobody has ever been convicted for the killing itself.

Ruling-party presidential candidate Luis Donaldo Colosio was shot to death at a campaign rally in 1994. Mario Aburto, a 23-year-old factory worker, was detained at the scene and quickly confessed to the shooting, claimed he had acted alone and was sentenced to 45 years. However, Aburto has since complained he was tortured into confessing, and in October the country’s National Human Rights Commission called for his case to be reopened, saying there was evidence to corroborate his claim of torture.

Jose Francisco Ruiz Massieu was the leader of the ruling Institutional Revolutionary Party. He was shot to death outside a hotel during the hotly contested 1994 presidential campaign. Raul Salinas — Ruiz Massieu’s brother-in-law and the brother of then-president Carlos Salinas — was convicted of ordering the killing. But that conviction was overturned in 2005 and nobody was ever convicted of paying the gunman who pulled the trigger.

Muñoz Rocha was accused of helping Salinas mastermind the murder of Ruiz Massieu. A ruling party senator, Munoz Rocha, disappeared shortly after the killing and was never captured. In a bizarre turn of events, a federal prosecutor later hired a clairvoyant who led investigators to a skull buried at a ranch owned by Salinas in 1996. But the skull turned out to be from one of the clairvoyant’s deceased relatives and bore the signs of having previously been autopsied. The clairvoyant was jailed for helping plant fake evidence, Muñoz Rocha was never seen again, alive or dead.

Polo Uscanga was a Mexico City judge who claimed to have received threats from government officials after he refused to order the arrest of members of a dissident bus drivers’ union. He was found dead in his office with two bullet wounds to the head. Authorities quickly ruled a suicide but the conclusion was widely ridiculed.

Human rights lawyer Digna Ochoa was found dead on the floor of her Mexico City office in 2001, and rights groups suspected her enemies in the army, the government or the timber industry had silenced her. The circumstances were strange An anonymous note found near her body seemed to threaten other human rights activists. Ochoa had been shot twice with her own pistol and there was no sign of forced entry. Investigators didn’t find any unusual fingerprints and wondered why Ochoa was wearing rubber gloves, and why there was flour sprinkled all over the scene. The chief investigator on the case was forced to resign after he concluded Ochoa shot herself to become a human rights martyr. Nobody has ever been convicted in the case.

Bradley Will, 36, an independent U.S. video journalist and activist, was shot to death while accompanying radical activists who took over the southern Mexico city of Oaxaca during massive protests. Authorities quickly charged one of the protesters — not government supporters — with Will’s killing, even though the two sides were clashing when Will was shot. But by 2019, courts had released the only men jailed in the case, and nobody else has ever been brought to justice.

Mexico state prosecutor Alberto Bazbaz resigned in 2010 after he announced that following an extensive, nine-day search for a missing 4-year-old, Paulette Gebara's body had finally been found in her own bed and overlooked by police. Bazbaz claimed she had accidentally smothered in her own bedding and prosecution agents apparently found her only after the body began to smell. One year later, Bazbaz was appointed as head of the country’s national intelligence agency.