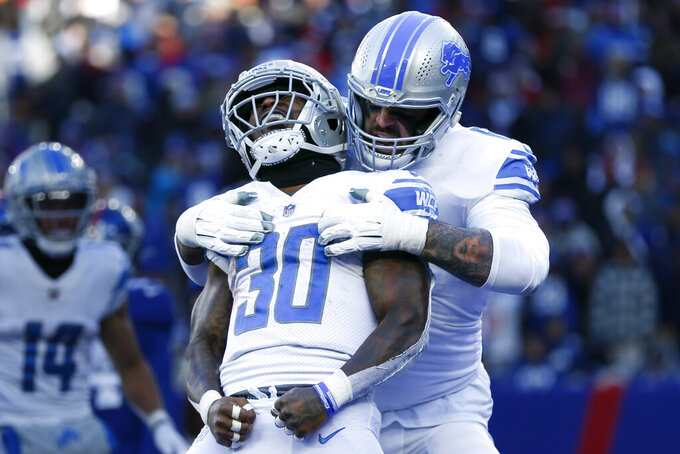 TURNOVER DIFFERENTIAL: Bills even; Lions plus-1.

BILLS PLAYER TO WATCH: WR Stefon Diggs. The Browns held Diggs without a catch until he scored the go-ahead TD on a 5-yard reception with 14 seconds left in the first half. He finished with a season-low 48 yards receiving on four catches. Diggs should be more active against one of the NFL’s shakiest passing defenses.

LIONS PLAYER TO WATCH: RB Jamaal Williams. He had a career-high three touchdowns against the Giants. Williams joined Shaun Alexander, LaDainian Tomlinson and Priest Holmes as the only players since 2000 to have more than one rushing TD in at least five of a team's first 10 games in a season. To upset the Bills, he will probably have to score at least twice.

KEY MATCHUP: Buffalo's running game against Detroit's defense. Bills RB Devin Singletary ran for a season-high 86 yards, the same total rookie RB James Cook had for his best game on the ground in the win over Cleveland. That production took pressure off QB Josh Allen. The Lions have been shaky against the run, but they did limit Giants RB Saquon Barkley to a season-low 22 yards on 15 carries.

KEY INJURIES: Bills DE Greg Rousseau (ankle) will miss his third straight game and LB Tremaine Edmunds (groin) was ruled out for Thursday. ... DE A.J. Epenesa (ankle) is doubtful after he was hurt Sunday and C Mitch Morse (elbow, ankle) is questionable. ... Lions will be without perhaps their best player on defense, CB Jeff Okudah. ... Starting guards Jonah Jackson (concussion protocol) and Evan Brown (ankle) are out, setbacks for an OL that lost starting guard Halapoulivaati Vaitai to back surgery in September. ... DEs Charles Harris (groin) and Josh Paschal (knee) will also be inactive. ... WR Josh Reynolds (back) is questionable.

SERIES NOTES: The Bills have won a series-best three straight, all decided by three or fewer points, and five of the past six meetings. ... The Lions are 2-0 against Buffalo on Thanksgiving Day, winning in 1976 and 1994. ... Buffalo’s 17-14 win at Detroit on Oct. 5, 2014, was the team’s final game before the franchise was officially sold to Terry and Kim Pegula. The Pegulas purchased the Bills from the estate of founder and Hall of Fame owner Ralph Wilson, who died in March of that year. Wilson was based in Grosse Pointe Shores near Detroit and owned a small share of the Lions before founding the AFL Bills in 1960.

STATS AND STUFF: The Bills return to Detroit for a second straight game after the NFL moved their game against Cleveland to Ford Field after a massive snowstorm that dumped as much as 7 feet of snow across Western New York. ... The Bills will be the third NFL team to play two games in five or fewer days on the road in the same stadium. The 2020 Patriots did it at SoFi Stadium and the 1932 Porsmouth Spartans did it in Thompson Stadium. ... The Bills also played consecutive games in the same away venue when they opened 2019 with back-to-back games against the Jets and Giants at Met Life Stadium. ... The Bills are tied with Miami atop the AFC East, one game ahead of New England and the Jets. ... LB Matt Milano became the first player in the league to have 10-plus tackles, three tackles for loss, a sack and fumble recovery in the same game since former Pittsburgh LB Ryan Shazier in 2015. ... PK Tyler Bass matched a franchise record by hitting six FGs against Cleveland. ... The Lions have won three straight for the first time since Novemeber 2017, and have a three-game winning streak going into their annual game on the holiday for the second time since the AFL-NFL merger in 1970. ... Detroit lost its 2017 Thanksgiving game, starting its franchise-record matching five-game losing streak on the holiday. ... The Lions, who began playing on Thanksgiving in 1934, also lost five in a row on the holiday from 2004-12 and 1945-1949. ... Detroit's RBs have an NFL-high 18 TDs this season. ... DT Alim McNeill is the team's first interior lineman in seven-plus years to have a game with three tackles for loss, and a sack. ... Rookie DE Aidan Hutchinson, the No. 2 pick in the draft, was the NFC defensive player of week after becoming the first DL in team history since 1993 to have an INT and fumble recovery in the same game.

FANTASY TIP: Singletary is showing signs of heating up. The player nicknamed “Motor” had his best game of the season on the ground against the Browns, and scored for the third time in two games. The Lions are still suspect against the run.