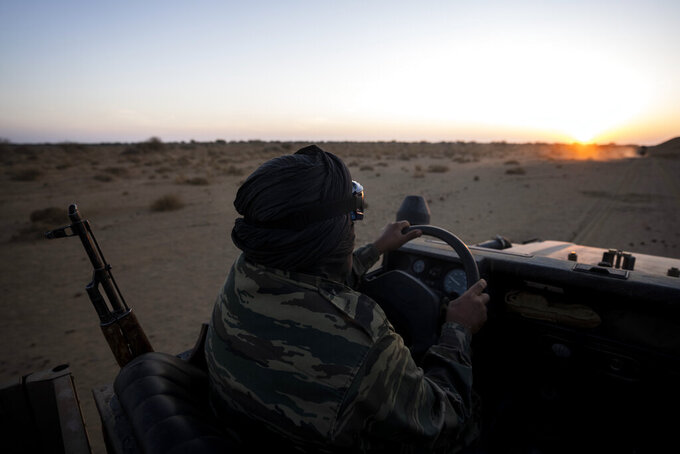 Bernat Armangue, ASSOCIATED PRESS
A Polisario Front soldier drives a pickup, near Mehaires, Western Sahara, Thursday, Oct. 14, 2021. For nearly 30 years, the vast territory of Western Sahara in the North African desert has existed in limbo, awaiting a referendum that was supposed to let the local Sahrawi people decide their future. On one side, the Polisario Front wants the territory to be independent, while Morocco claims the area for itself. (AP Photo/Bernat Armangue)

UNITED NATIONS (AP) — The U.N. Security Council extended the U.N. peacekeeping mission in the disputed Western Sahara for a year on Friday, expressing concern at the breakdown of the 1991 cease-fire between Morocco and the pro-independence Polisario Front and calling for a revival of U.N.-led negotiations.

The vote was 13-0 with Russia and Tunisia abstaining.

The U.S.-drafted resolution makes no mention of U.S. backing for Morocco’s claim to the mineral-rich territory in the waning days of the Trump administration as part of efforts to get Morocco to recognize Israel. And it did not mention the “low-intensity hostilities” -- as a recent United Nations report describes the violent exchanges between the two sides -- that have raged for the past year.

Morocco annexed Western Sahara, a former Spanish colony believed to have considerable offshore oil deposits and mineral resources, in 1975, sparking a conflict with the Polisario Front. The U.N. brokered the 1991 cease-fire and established a peacekeeping mission to monitor the truce and help prepare a referendum on the territory’s future that has never taken place because of disagreements on who is eligible to vote.

The Front ended the 29-year cease-fire with Morocco last November and resumed its armed struggle following a border confrontation with Morocco which continues today. The Moroccan military had launched an operation that month in the U.N.-patrolled Guerguerat border zone to clear a key road it said had been blockaded for weeks by Polisario supporters.

Morocco has proposed wide-ranging autonomy for Western Sahara. But the Polisario Front insists the local population, which it estimates at 350,000 to 500,000, has the right to a referendum.

The resolution extends the mandate of the U.N. peacekeeping mission charged with carrying out the referendum, known as MINURSO, until Oct. 31, 2022.

The resolution calls on the parties to resume U.N.-led negotiations without preconditions, “taking into account the efforts made since 2006 and subsequent developments with a view to achieving a just, lasting and mutually acceptable political solution, which will provide for the self-determination of the people of Western Sahara.” It says this should be done “in the context of arrangements consistent with the principles and purposes of the Charter of the United Nations, and noting the role and the responsibilities of the parties in this respect.”

U.S. Deputy Ambassador Richard Mills called on the parties after the vote to engage in talks and take steps “to de-escalate tensions and cease hostilities.”

He said the U.S. will continue to consult privately on how best to achieve a mutually acceptable solution to the conflict, adding: “We continue to view Morocco’s autonomy plan as serious, credible and realistic and one potential approach to satisfy these aspirations.”

Russia’s Deputy U.N. Ambassador Dmitry Polyansky said Russia abstained because the resolution didn’t reflect what has happened in Western Sahara “after the military escalation” in November 2020. He said the general language in the resolution calling for realistic approaches and the need to make compromises also leads to “ambiguity,” undermines trust and makes it more difficult to resume dialogue.

Polyansky reiterated Russia’s “balanced stance” on a Western Sahara settlement, saying it must result from direct negotiations between Morocco and the Polisario Front, satisfy both sides, and provide for self-determination of the Western Sahara people.

The Security Council stressed “the importance of improving the human rights situation in Western Sahara and the Tindouf camps” in Algeria, where Western Sahara refugees have lived for decades.

But U.S. Sen. Jim Inhofe, an Oklahoma Republican, called this language “toothless," saying it “amounts to nothing more than giving Morocco a free pass to continue to illegally detain and torture activists."

“At a time when Morocco is growing increasingly aggressive towards the Sahrawi people and journalists, it is unacceptable to me that the annual MINURSO resolution failed to include meaningful language protecting the rights of Western Saharans," said Inhofe, the ranking Republican on the Senate Armed Services Committee. “I am going to continue advocating for the rights of Western Sahara as we work to an enduring solution to resolve the more than 30-year effort towards achieving self-determination for the Sahrawi people.”

Two roundtable meetings of Morocco and the Polisario Front, along with the neighboring countries of Algeria and Mauritania, in December 2018 and March 2019 failed to make any headway on the key issue of how to provide for self-determination.

Morocco’s U.N. Ambassador Omar Hilale reiterated his country’s support for autonomy and pointed to economic developments in Western Sahara including plans for the biggest deep-water port in Africa.

“For Morocco there is this tango between the political process and the development of the Sahara” which is “a human right,” he said, adding that his nation is promoting the economy, health and education of the people in Western Sahara.

The Polisario Front’s U.N. representative, Sidi Omar, accused Morocco of violating the cease-fire, strongly criticized the Security' Council's inaction, and defended the Front's right to self defense “to confront the Moroccan new act of aggression and defend the sovereignty of our country.”

He called the resolution adopted Friday “very discouraging” for failing to respond to the “unprecedented" situation on the ground, and said the Russian and Tunisian abstentions indicate “serious reservations about the letter and spirit” of the measure and send “a very strong message to all those who seek to deviate (from) the U.N. peace process in Western Sahara.”