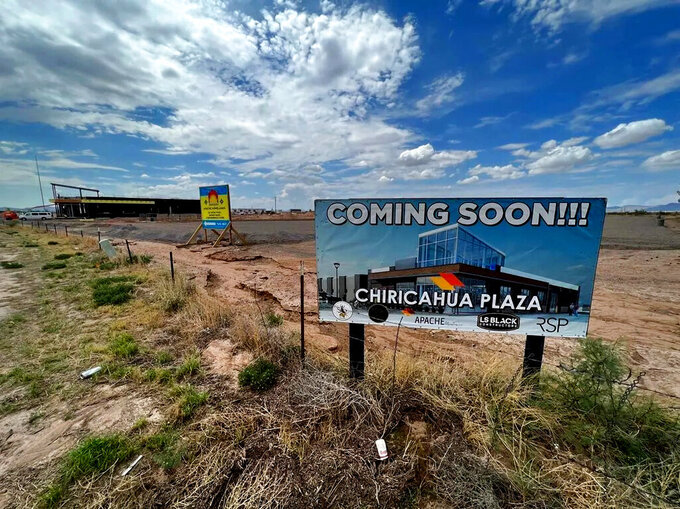 DEMING, N.M. (AP) — A legal representative of the Fort Sill Apache tribe seemed pleasantly surprised by the prevailing mood at a public scoping meeting for a proposed gaming facility and other developments on a patch of land in Luna County.

“I applaud you folks here today,” the tribe’s attorney, Phillip Thompson, said during the recent meeting. “I’ve been to some rancorous meetings about casinos in California and other parts of the country where, you know, we were looking for the back exit.”

No one spoke in opposition to the project at a meeting soliciting community input, the Las Cruces Sun-News reported. Those who came to the microphone had questions about the project and potential economic development, and one man even offered business advice for the future casino.

Luna County stood at 11.5% official unemployment in May and typically sees double-digit rates, while county and city populations have dwindled in recent years.

The tribe currently operates Apache Homelands, a restaurant, cigarette shop and convenience store with a museum next to a pecan orchard alongside Interstate 10 in Akela, 20 miles east of Deming.

Construction has been underway since last fall on an expanded retail facility that will offer shower and laundry facilities, electric vehicle charging stations and expanded retail operations. The project, branded Chiricahua Plaza, is nearly 10,000 square feet (929 square meters) in size and is anticipated to be completed late in 2022.

A wastewater treatment plant designed to recycle greywater for irrigation and non-drinking uses is also under construction.

Last week's event was a scoping meeting at which Thompson, alongside tribe chairwoman Lori Gooday Ware and project manager Brady Jones, presented plans for future developments and solicited public input as part of an approval process for gaming facilities that requires sign-offs from the U.S. interior secretary and New Mexico’s governor.

The proposed developments include a gaming facility within the existing building that will feature up to 100 Class II slot machines, parking facilities that will accommodate RVs and trucks, enhanced tribal offices and cultural facilities.

The tribe projects the Akela project will create more than 160 jobs in the construction phase, averaging $46,000 in yearly wages and nearly $25 million in economic activity. After that, it anticipates 60 operational jobs at $34,100 in average wages, and to stimulate the economy by $16.4 million with $1.1 million in tax revenue.

The tribe has also studied potential impacts for a potential hotel and other attractions at the location.

The project seeks to establish an economic base for the small, federally recognized tribe descended from Chiricahua and Warm Springs Apache peoples taken as prisoners of war and removed from the southwest to Florida, Alabama and eventually Oklahoma.

Fort Sill Apache, named for the location of their captivity, was recognized by the United States in 1976 and granted approval of a reservation in New Mexico in 2011 after long and complex litigation. Thompson said the tribe is negotiating a land swap with New Mexico, exchanging land it owns in Albuquerque for land adjacent to the Akela development.

Efforts to establish gaming facilities at Akela have also been subject to challenges from the National Indian Gaming Commission, the state and federal governments. Among the issues raised is that the tribe’s government is based in Oklahoma and had few economic links to New Mexico.

Thompson addressed that at the beginning of his presentation, explaining that the tribe is the recognized legal successor for Apache groups that lived in southwest and northern New Mexico and part of Arizona, before their removal by the United States after the bands’ surrender in 1886. Thompson said the tribe aimed to establish their homelands once more in New Mexico and provide its citizens with community and economic opportunity.

Rebecca Lescombes, a Libertarian candidate for the Luna County Board of Commissioners, asked the representatives how many of the jobs would be designated for tribal members versus local residents as well as housing needs.

Jones, the project manager, said the Fort Sill Apache is “very small” and employs workers from outside the tribe.