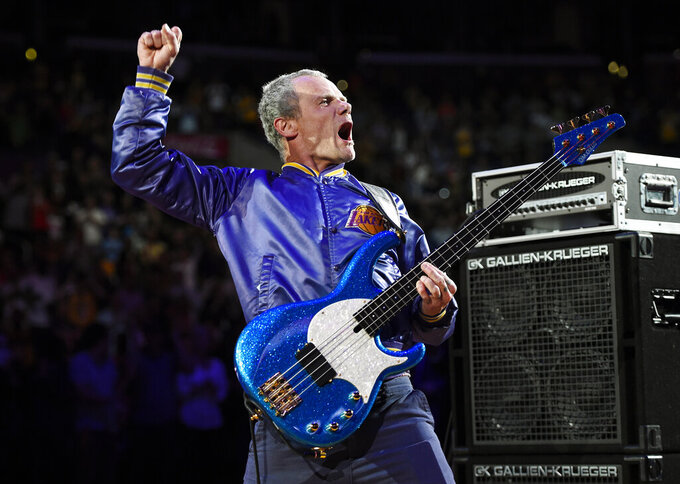 Mark J. Terrill, ASSOCIATED PRESS
FILE - In this April 13, 2014 file photo, Flea, bassist for the Red Hot Chili Peppers, plays the national anthem prior to an NBA basketball game between the Los Angeles Lakers and the Memphis Grizzlies in Los Angeles. Flea turned 59 on Saturday, Oct. 16, 2021, and his Silverlake Conservatory of Music turned 20, and they celebrated with a joint party in the parking lot for the Los Angeles school that often serves as a de facto performance space for its faculty and students. (AP Photo/Mark J. Terrill, File)

LOS ANGELES (AP) — Flea had a funky birthday. So did the music school he co-founded that has become an LA institution.

As the Red Hot Chili Peppers bassist turned 59 on Saturday, and his Silverlake Conservatory of Music turned 20, they celebrated with a joint party in the parking lot for the Los Angeles school that often serves as a de facto performance space for its faculty and students.

Flea led a band assembled for the occasion through a series of funk standards including James Brown's “Gonna Have a Funky Good Time,” banging his orange-beanied head and scissor-kicking across the makeshift stage.

“This is the best possible birthday gift I could have imagined, being here with everybody, celebrating that we got to do this for 20 years,” Flea said. “I’m so grateful for the opportunity to be part of a community and to work together with people to uplift young people.”

His bandmates for the night included keyboardist Cory Henry, members of Fishbone — another punk-funk hybrid band from 1980s LA — and members of the school's youth chorale, who joined them as backup singers on the Meters' “Hey Pocky A-Way.”

The kids, who have hardly sung in front of people since the start of the pandemic, took center stage earlier in the evening for a singing of Patti Smith's “People Have the Power.”

“It felt really good,” said 13-year-old Isla Farris of Pasadena, one of the song's soloists. “We were all kind of a little bit panicked but it was a really good experience for all of us. We enjoyed it after we got out of our heads.”

She and other students got to know Smith when she recently visited the school to record a podcast with Flea — one of the perks of being a conservatory student.

“Curb Your Enthusiasm” actor and comedian Jeff Garland, who served as the night's emcee, expressed his jealousy after hearing the kids sing.

“Nobody told me when I was a kid that people had the power,” Garland said. “If I’d known Patti Smith, I might have known it. But I only knew the Partridge Family.”

Flea, born Michael Balzary, founded the nonprofit school in 2001 with his longtime friend and sometime musical collaborator Keith “Tree” Barry. It’s open to all comers, but specializes in serving the youth of the surrounding community in eastern Los Angeles, providing scholarships to kids who need them.

The crowd Saturday night was full of current and former students, some of whom are adults who were small kids when they started studying.

Even at 13, Farris remembers singing in the tiny space in the Silver Lake neighborhood the school was jammed into before they built their current, more cushy digs a mile away in Los Feliz five years ago, with rehearsal rooms named for prominent sponsors like Eddie Vedder.

“I’ve just been here so long and I have an extreme attachment to it,” she said. “It’s just an amazing place. I’ve always loved doing choir here.”

Flea was presented with a cake as they played, but COVID precautions meant no candles. And there was a lot more missing, as he's decades past the decadence of youth.