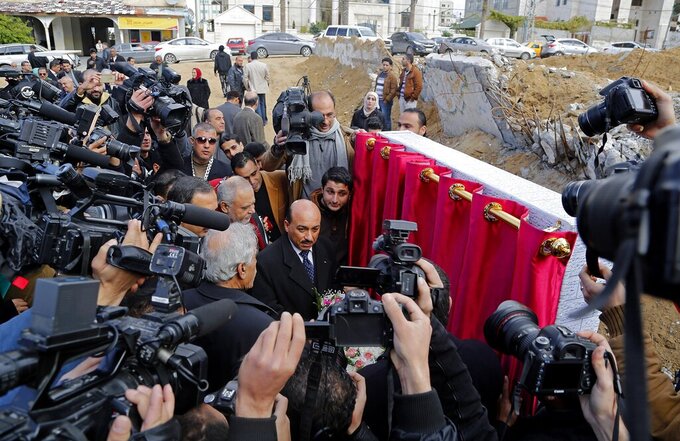 TEL AVIV, Israel (AP) — Gaza’s militant Hamas rulers issued sweeping new restrictions on journalists after the recent conflict there, but then rescinded them, a group representing foreign media in Israel and the Palestinian territories said Tuesday.

Palestinians who work with foreign journalists were first informed of the new rules earlier this week in messages sent by the Hamas-run Interior Ministry. They were ordered not to report on Gazans killed by misfired Palestinian rockets or the military capabilities of Palestinian armed groups, and were told to blame Israel for the recent escalation.

The Foreign Press Association, which represents international media, including The Associated Press, said the guidelines were rescinded after discussions with authorities in Gaza.

The FPA said in a statement that "such a move would have constituted a severe, unacceptable and unjustifiable restriction on the freedom of the press, as well as the safety of our colleagues in Gaza,"

Salama Marouf, director of the government media office in Gaza, confirmed the reversal. “There are no restrictions,” he said. “We welcome all foreign journalists and media into Gaza and we call on them to come.”

The rules would have gone much further than existing Hamas restrictions. They appeared aimed at imposing the Islamic militant group's narrative on media coverage of the conflict by implicitly threatening Palestinian reporters and translators who live under its heavy-handed rule.

Even if the rules are officially withdrawn, Hamas has still signaled its expectations, which could have a chilling effect on critical coverage.

In the long-running Israeli-Palestinian conflict, both sides have attempted to impose their narratives and limit negative coverage. Israel, which portrays itself as the only democracy in the Middle East, has a military censor who sometimes imposes gag orders. Israeli authorities also restrict media access to military activities and the country's nuclear program.

Hamas' attempt this week to muzzle the foreign media came after it sat out the latest conflict with Israel. The decision to stay on the sidelines likely reflects Hamas' desire to preserve economic understandings with Israel that have somewhat eased a 15-year blockade imposed by Israel and Egypt after the Hamas takeover.

After a Gaza cease-fire took hold Monday, following three days of fighting between Israel and Hamas' smaller sister group Islamic Jihad, the Interior Ministry distributed a written copy of the rules to Palestinians applying for entry permits on behalf of foreign media outlets, with instructions to communicate them to the foreign journalists in their “own local way."

Hamas, which seized power in Gaza in 2007 from rival Palestinian forces, requires all visiting reporters to have a local sponsor — usually a Palestinian journalist or translator hired by the news outlet.

Under the now rescinded restrictions, sponsors were told they must accompany the journalists during their reporting and will be held responsible for what they produce. The sponsors were warned that they must "demonstrate national spirit, defend the Palestinian narrative and reject the foreigner’s bias to the Israeli narrative.”

They would have also been required to inform Hamas of “any suspicious behavior or illogical questions” outside the scope of journalistic work, and to submit a full report to Hamas of what the journalists did in Gaza, in addition to links to all published works.

The guidelines appeared to suggest that writing about forbidden topics like the rocket misfires — or about the media guidelines themselves — could have led to the revocation of local sponsorship. For a Palestinian journalist in Gaza, that would have meant the loss of vital income in a blockaded territory where unemployment hovers around 50%.

In many respects, Gaza became a much safer place for reporters after the Hamas takeover, when the group imposed order and put an end to kidnappings and factional violence. But as Hamas consolidated control — and went on to fight four wars and countless smaller battles with Israel — it steadily imposed more and more restrictions on media.

In recent years, Hamas has required journalists to apply for advance approval to film in certain locations, such as the Gaza fishing port, the beach and the gold market.