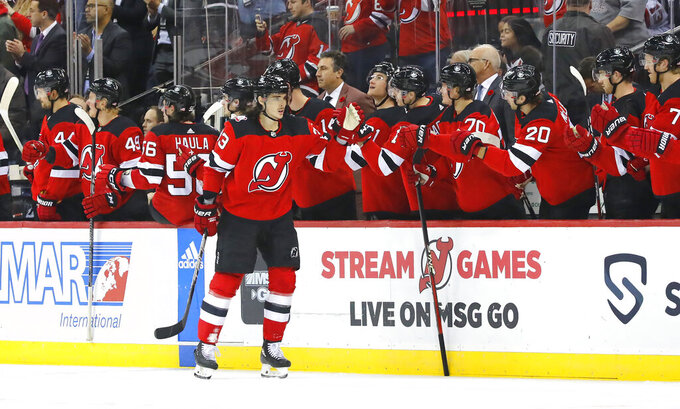 NEWARK, N.J. (AP) — The New Jersey Devils are not only winning, they are doing it even when they don't play well.

Nico Hischier scored off a rush with 8:10 to play and the New Jersey Devils beat the slumping Calgary Flames 3-2 Tuesday night for their seventh straight win.

“I mean it wasn’t pretty for sure. It wasn’t our best game,” Hischier said. “I think we didn’t have our legs in the first period, to be honest, was embarrassing. But we found a way and came back and in the end, if you’re going to win those games, it’s huge.”

“I thought the energy in our building was great. Even the fact that we came out on our heels and I just got to say, they parked us on our heels,” Devils coach Lindy Ruff said. “But again, a great sign that we’re able to overcome that. I thought their goalie made some really big saves too or we could have probably scored three or four.”

Nazem Kadri and Tyler Toffoli scored power-play goals for the Flames, who have lost six straight (0-4-2). Jacob Markstrom made 17 saves.

Kadri said the Flames have a right to feel a little frustrated after losing two straight in overtime and then being beaten in a game they played well.

Hischier's sixth goal came against the flow of play. The Flames kept the puck in the Devils' end for about two-plus minutes. Tomas Tatar got the puck out of the zone to Hamilton, who found Hischier coming down the middle. His shot beat Markstrom between the pads.

“I have to be honest. I first couldn’t believe it, because I had this pump-fake, five hole move in my head but I thought I’m way too far out, but somehow I didn’t see it going in and it still got in so it was pretty cool,” Hischier said. “Got me fired up.”

Toffoli’s had tied the game at 2-all at 5:13 of the third period with a power-play shot from the left circle that beat Vanecek to the top corner of the net. It came 20 seconds after Miles Wood was called for holding.

Despite being outshot 23-15 and having two goals nullified after Calgary challenges, the Devils led 2-1 after two periods on goals by Graves and Hamilton, the latter with a two-man advantage.

Kadri had give Calgary a 1-0 lead at 11:58 of the first period, a session in which the Flames held a 14-5 shot advantage. The tally was the seventh of the season for Kadri and it came on a wicked shot from the right circle on a power play.

The Devils had a goal by defenseman Jonas Siegenthaler overturned in the first period and another by Yegor Sharangovich taken off the board early in the second. The Devils entered the offensive zone too early on Siegenthaler's goal and Sharangovich used a kicking motion to put kicked the puck into the net on his.

NOTES: Flames coach Darryl Sutter said center Jonathan Huberdeau was scratched because he could not get his foot in his stake. The team had said he had an upper body injury. ... The Flames used forward Adam Ruzicka and defenseman Dennis Gilbert in the lineup. Gilbert knocked down Devils F Nathan Bastian in a one-side fight. ... The Devils were outshot for only the second time this season. ... Vanecek has won six in a row. ... Devils G Mackenzie Blackwood is going to be sidelined 3-to-6 week with a knee injury. Akira Schmid is now the backup.

Flames: At Boston on Thursday night to wrap up a three-game road trip.

Devils: Host Ottawa on Thursday night in the second of a three-game homestand.