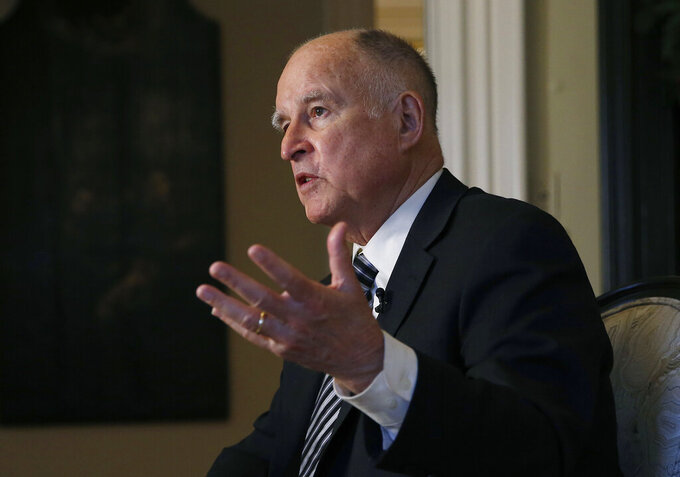 Rich Pedroncelli, ASSOCIATED PRESS
FILE - Then-California Gov. Jerry Brown talks during an interview in Sacramento, Calif., on Dec. 18, 2018. When former Gov. Brown signed the nation's first law requiring that women sit on corporate boards of publicly traded companies, he suggested it might not survive legal challenges. Three years later, a judge will begin hearing evidence on Wednesday, Dec. 1, 2021, in Los Angeles Superior Court that could undo a law that has already been credited with giving more women a seat in boardrooms. (AP Photo/Rich Pedroncelli, File)

LOS ANGELES (AP) — A lawyer for the state of California defended the constitutionality of the nation’s first law requiring women on corporate boards Wednesday as necessary to reverse a culture of discrimination that favors men.

In opening statements at a trial that seeks to undo the law aimed at companies headquartered in California, Deputy Attorney General Ashante Norton said women can't break through the glass ceiling because corporate board seats are selected through a secretive process often influenced by an old boy’s network, she said.

“The ceiling was bolted shut with men," Norton said. "And the evidence will show that women have been shut out.”

The conservative legal group Judicial Watch sued the state claiming it’s illegal to use taxpayer funds to enforce a law that violates the equal protection clause of the California Constitution by mandating a gender-based quota.

Judicial Watch attorney Robert Sticht presented a brief opening statement saying he would prove all the necessary points to show the law should be invalidated.

“They are creating a classification that either prefers or discriminates against one class or in preference of another,” Sticht said before trial.

The nonjury trial in Los Angeles Superior Court is expected to take six to seven days and will focus on a legal question.

“Does this law withstand constitutional scrutiny?" Judge Maureen Duffy-Lewis said in summing up the heart of the case.

Even legislative analysts who reviewed the law have asked that question and former Gov. Jerry Brown suggested it might not survive a legal challenge when he signed SB826 in 2018.

Brown signed it amid the budding #MeToo movement over sexual misconduct, saying it was the right thing to do.

“I don’t minimize the potential flaws that indeed may prove fatal to its ultimate implementation,” the Democratic governor said in a letter. “Nevertheless, recent events ... make it crystal clear that many are not getting the message.”

The law required publicly traded companies headquartered in California to have one member who identifies as a woman on their boards of directors by the end of 2019. By January, boards with five directors must have two women and boards with six or more members must have three women.

Penalties range from $100,000 fines for companies that fail to report board compositions to the California secretary of state’s office. Companies that do not include the required number of female board members can be fined $100,000 for first violations and $300,000 for subsequent violations.

No companies have been fined, though the secretary of state can do so, said spokeswoman Jenna Dresner.

Fewer than half the nearly 650 applicable corporations in the state reported last year that they had complied. More than half didn’t file the required disclosure statement, according to the most recent report.

Before the California law went into effect, women held 17% of the seats on company boards in the state, based on the Russell 3000 Index of the largest companies in the U.S., according to the advocacy group 50/50 Women on Boards. As of September, the percentage of board seats held by women climbed to more than 30% in California, compared to 26% nationally.

Still, some 40% of the largest companies in California need to add women to their boards to comply with the law, the group said.

Norton said the state had a compelling interest to pass the law and only did so after previous efforts failed to get companies to do so voluntarily.

In 2013, the Legislature passed a resolution to get companies to add women to their boards, but few did.

"All these other efforts failed to bring about any real change and the needle had barely moved,” Norton said.

She said the law did not create a quota because boards could add seats so “no man has to lose his seat.”

Other states have followed California's lead. Washington state passed a similar measure this year and lawmakers in other states, including Massachusetts, New Jersey and Hawaii, have proposed similar bills. Illinois requires publicly traded companies to report the makeup of their boards.

The U.S. Securities and Exchange Commission in August approved Nasdaq’s proposal that most of the nearly 3,000 companies listed on the exchange have at least one woman on their boards, along with one person from a racial minority or who identifies as gay, lesbian, bisexual, transgender or queer.

There's no penalty for companies that don't meet the Nasdaq diversity criteria, but they must publicly explain why they could not comply.

The Nasdaq rule and a California law signed last year requiring publicly traded corporate boards have a member by January from an underrepresented community — including Black, Latino, Asian, Pacific Islander, Native American, or someone who self-identifies as gay, lesbian, bisexual, or transgender — are also facing lawsuits.

Judicial Watch sued in August 2019. Pacific Legal Foundation sued three months later in federal court on similar grounds on behalf of a shareholder who said the law would force him to discriminate on the basis of sex. The latter case was thrown out by a federal judge, but revived by a unanimous panel of the 9th U.S Circuit Court of Appeals.

Although the California Chamber of Commerce had opposed the law, it didn't sign on to the litigation and no company has joined the legal effort being led in Los Angeles by three California residents. They sued under a provision that allows taxpayers to prevent unlawful government expenditures.