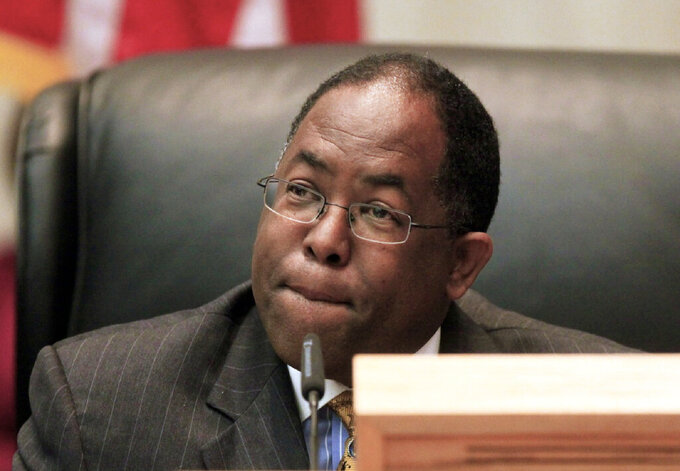 LOS ANGELES (AP) — A former dean at the University of Southern California pleaded guilty Monday in a bribery case involving a powerful Los Angeles politician who promised to help steer a multi-million contract to the school if his son got a scholarship and a teaching job.

Marilyn Flynn, 83, was dean of USC's School of Social Work from 1997 to 2018. In her plea agreement with federal prosecutors, Flynn said that she arranged for $100,000 to be illegally funneled on behalf of Mark Ridley-Thomas in 2018, when he was on the LA County Board of Supervisors.

Flynn and Ridley-Thomas, who is now on the Los Angeles City Council, were charged in the public corruption case last year. Ridley-Thomas is scheduled to go on trial in November on charges of fraud, bribery and conspiracy. He pleaded not guilty last October, only hours after his colleagues suspended him and the city controller cut off his pay.

Federal prosecutors said that Mark Ridley-Thomas offered to support a lucrative amendment to a county contract for USC’s School of Social Work — which had a multimillion-dollar budget deficit — in return for helping his son, Sebastian Ridley-Thomas.

Flynn promised to provide a full-tuition scholarship and a paid professorship, and concocted a scheme to funnel $100,000 that Ridley-Thomas provided from campaign funds through the university to a non-profit run by his son, prosecutors alleged.

Sebastian Ridley-Thomas was a state Assemblyman who resigned the last day of 2017 while facing allegations that he made an unwanted sexual advance toward a Capitol staffer. The $100,000 went to his organization, known as the Policy, Research & Practice Initiative.

He later received a $26,000 scholarship for 2018 and was offered a paid teaching position with a $50,000 salary, even though being a student and a teacher would violate school policy, authorities said.

“Ridley-Thomas allegedly wanted to help secure paid employment for his relative to minimize any public fallout for them both in the wake of the sudden resignation from office,” according to a U.S. attorney’s office statement last year.

Flynn, who could have faced up to 10 years in federal prison, pleaded guilty to one count of bribery. Under the plea agreement, prosecutors will recommend home confinement rather than prison for Flynn and a fine of no more than $150,000 when she is sentenced next March.

USC wasn't accused of wrongdoing in the criminal case but it further tarnished school's elite image, already battered by a series of scandals.

USC was one of the universities embroiled in an admissions cheating scandal in which wealthy parents sought to get their undeserving offspring into college by falsely portraying them as star athletes. Dozens of parents and athletic coaches nationwide were charged and more than 50 people were convicted in the “Operation Varsity Blues” case. They include TV actresses Felicity Huffman and Lori Loughlin, and Loughlin’s fashion designer husband Mossimo Giannulli.

Last year, USC agreed to an $852 million settlement with more than 700 women who accused the college’s longtime campus gynecologist of sexual abuse. It was believed to be a record amount for such a lawsuit. When combined with an earlier settlement of a separate class-action suit, USC has agreed to pay out more than $1 billion for claims against Dr. George Tyndall, who worked at the school for nearly three decades.