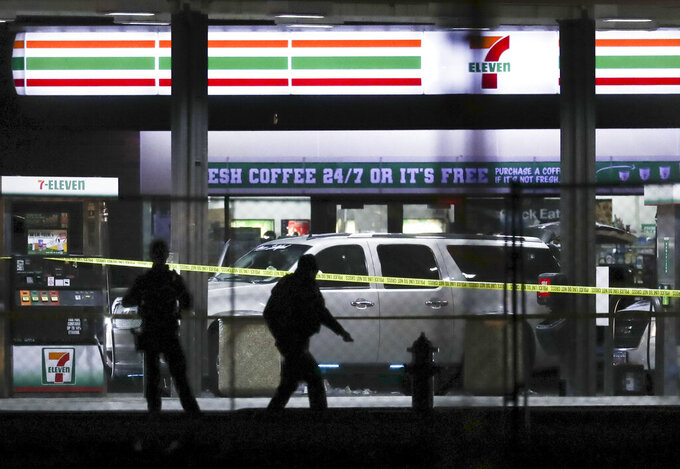 Laura Seitz, ASSOCIATED PRESS
Crime tape and a heavy police presence surround a 7-11 in West Valley, Utah, on Wednesday, Dec. 1, 2021. A Utah man wanted by police was killed and two officers were wounded in a shootout in the parking lot of the convenience store in suburban Salt Lake City, police said. (Laura Seitz/The Deseret News via AP)

WEST VALLEY CITY, Utah (AP) — A Utah man wanted by police was killed and two officers were wounded in a shootout in the parking lot of a convenience store in suburban Salt Lake City, police said.

The 20-year-old suspect, Anei Joker, was wanted in a robbery and rape investigation and officers spotted him Wednedsay night with a baby inside a vehicle at the convenience store, the West Valley City Police Department tweeted.

Joker refused to get out of the vehicle but released the baby after negotiations, police said.

The shootout happened later when Joker left the vehicle and opened fire at officers, police said. Authorities said that a West Valley City detective was wounded, underwent surgery and was in stable condition Thursday and that an officer with the Unified Police Department of Greater Salt Lake was treated at a hospital and released.

Joker had a conviction for aggravated robbery and in June pleaded guilty to attempted discharge of a firearm and aggravated assault, receiving a sentence of three years probation and a suspended prison sentence, KSL-TV reported.

In a letter to the judge in which Joker apologized, he said he had two children, had learned his lesson and asked for probation. Joker wrote that he had a difficult life and had to live in a homeless shelter when he was young after his brother was sent to prison.