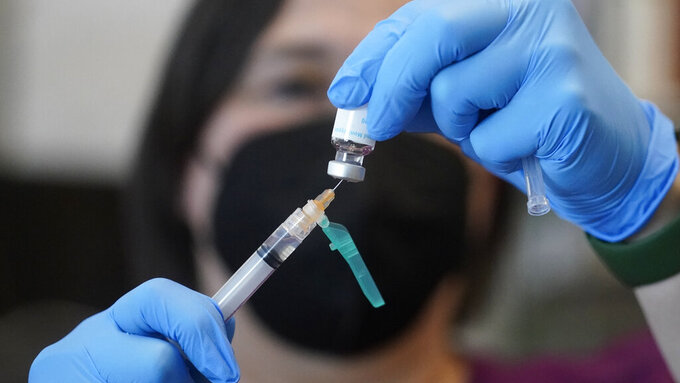 CLAIM: At the Huntington Place ballot counting site in Detroit after the Aug. 2 election, at least 50% of ballots lacked evidence of signature verification, and large bags and coolers under tables caused a security issue.

THE FACTS: All the ballots counted at the facility had gone through the signature review process and the bags and coolers contained food and belongings for election workers who were not able to leave while ballots were counted. A Detroit convention center that doubled as a ballot counting site became the hub of election falsehoods in November 2020, and following Michigan’s Aug. 2 primary election this week, similar online claims returned in force. Social media posts and articles on conservative blogs misrepresented what poll watchers, or volunteers allowed to observe the counting process, supposedly witnessed at the Huntington Place ballot counting site, formerly known as the TCF Center. The posts reported that Republican poll watchers observing the counting process “questioned why at least 50% of the ballots were lacking certification that they had been checked for signature verification." The posts also implied that “duffel bags, coolers, and a variety of large bags” visible underneath tables at the facility could be a security risk since they were next to trays holding absentee ballots. These claims are misleading, according to Daniel Baxter, election administrator for the city of Detroit, and Chris Thomas, a former state elections chief who currently assists with managing Detroit’s absentee counting board. The posts claimed that if absentee ballots had been signature verified, they would have been marked as such in a box printed on the envelopes. They claimed that poll watchers noticed that several of the boxes on the envelopes were unmarked. However, the reason some of the boxes on the envelopes were unmarked was because a machine that assists in the signature verification process marked the ballots slightly lower than the boxes, Thomas and Baxter both explained. In Detroit, clerks verify most voter signatures on absentee ballots using a mail processing system called Relia-Vote, Baxter said. A machine dates absentee ballot envelopes and photographs the signatures on them so clerks can view the images on a screen, comparing them digitally to signatures in the Qualified Voter File. If a clerk rejects the signature on a ballot envelope, that ballot does not advance to be counted, Baxter said. If the clerk approves it as a match, the Relia-Vote system marks the envelope with the ballot stub number and the name of the clerk who approved it, and sends it on for tabulation. The Relia-Vote system marks the ballots in the bottom section of the envelopes, Thomas said. That’s why many of the ballot envelopes viewed at the Huntington Place ballot counting site did not have markings where poll watchers expected. “In all instances, when ballots were processed by the clerks or the inspectors at the central counting board, all signatures were reviewed,” Baxter said. The posts also hinted that large bags and coolers located underneath tables during ballot counting were a security issue. Baxter and Thomas rejected that claim, explaining that everyone working in the room was constantly watched during the counting process. Baxter and Thomas said many workers at the site brought coolers with food to eat because security protocols required them to remain on the premises for their entire shift, which lasted several hours. Thomas said the many poll watchers and reporters in the facility during the counting process would notice if someone tried to sneak a ballot into or out of the facility. Baxter pointed out that audits of the absentee ballot counting process would also identify such issues.

Bill would not turn current semi-automatic weapon owners into felons

THE FACTS: The bill would only affect future firearm transactions, so people who already lawfully own such weapons when the bill passes would be allowed to keep them, legal experts confirmed. An effort by House Democrats to ban certain semi-automatic weapons is being misrepresented online. “They want to turn 150 million Americans into felons overnight,” read an Instagram post with a picture of House Speaker Nancy Pelosi that amassed thousands of likes. The post referred to H.R. 1808, also known as the Assault Weapons Ban of 2022, which passed in the House on July 29. The bill is expected to stall in the Senate, where Republicans have dismissed it as an election-year strategy by Democrats. The bill would make it a crime to knowingly import, sell, manufacture, transfer or possess a long list of semi-automatic weapons and magazines. Among the semi-automatic weapons banned would be some 200-plus types of semi-automatic rifles, including AR-15s, and pistols. The restrictions would not apply to many other models, which the bill lists by name. However, the bill would not turn existing owners of semi-automatic weapons and magazines into criminals. Instead, people who already legally own such weapons when the bill passes will still be allowed to possess the firearm, and those guns will still be legal to sell or otherwise transfer. A summary of the bill prepared by the Congressional Research Service lays out this exemption, saying, “The bill permits continued possession, sale, or transfer of a grandfathered SAW, which must be securely stored. A licensed gun dealer must conduct a background check prior to the sale or transfer of a grandfathered SAW between private parties.” Dru Stevenson, a professor at South Texas College of Law Houston whose research focuses on firearm law confirmed that “the bill grandfathers in current owners.” “It does not turn 150 million Americans into felons overnight,” Stevenson said in an email to the AP. Adam Winkler, a gun policy expert and professor of law at the University of California, Los Angeles, confirmed the same. Judiciary Committee Chairman Jerry Nadler, D-N.Y., also testified that the bill includes an exemption that allows for the possession of existing semi-automatic guns. The claim that 150 million people would be affected by the bill is also suspect, since current estimates suggest that there aren’t even that many firearms owners in the United States. A 2021 National Firearms Survey, for example, found that about 81 million Americans are gun owners.

CLAIM: Monkeypox can only be spread among gay men.

THE FACTS: While the overwhelming majority of cases in the current outbreak in the U.S. and Europe have so far been among men who have sex with men, experts and officials say the virus can be transmitted to anyone. As monkeypox has spread, social media posts have pushed an erroneous narrative that the virus can only be transmitted among gay men. “The ‘I have immunity to monkeypox’ starter kit,” declared a meme widely shared on Facebook, which included four depictions of heterosexual couples and families. Similar posts were shared on Twitter and TikTok. But it’s false to suggest the virus can only affect gay or bisexual men, or that anal sex is the only way it is transmitted. “Sexual orientation does not confer immunity to monkeypox,” Dr. W. Ian Lipkin, a Columbia University epidemiologist, told the AP in an email. “Furthermore, one can become infected without sexual activity.” Dr. Sharon Walmsley, a senior scientist at the Toronto General Hospital Research Institute who co-authored a recent study looking at hundreds of monkeypox infections across 16 countries, similarly said: “There is no evidence that heterosexual people have immunity and some have acquired infection.” Walmsley noted in an email that researchers believe monkeypox is spread through close contact, including sexual activity, but it is not confirmed if the virus is being spread via bodily fluids such as semen during sexual intercourse. As the AP has reported, scientists believe the primary route of transmission during the current outbreak has been skin-to-skin contact during sexual encounters with someone who has symptoms. The virus also may spread through saliva and respiratory droplets during prolonged, face-to-face contact, such as during kissing and cuddling. Additionally, transmission could occur through touching fabrics or objects, such as bedding or towels, used by a person with monkeypox, according to the Centers for Disease Control and Prevention. The U.S. has reported some monkeypox cases in some women and at least two in children. Officials suspect the cases in the children were due to household transmission. Monkeypox symptoms can include fever, chills, body aches and bumps on parts of the body. The lesions caused by the virus that can be extremely painful.

Immigrants are not getting Social Security numbers at the U.S. border

CLAIM: U.S. Border Patrol agents are giving Social Security numbers to immigrants who cross the border into the U.S. without authorization.