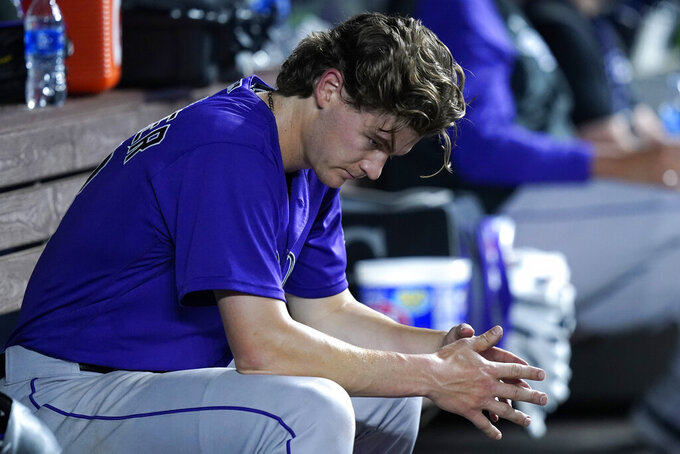 Lynne Sladky, ASSOCIATED PRESS
Colorado Rockies starting pitcher Ryan Feltner sits in the dugout after being relieved during the fourth inning of a baseball game against the Miami Marlins, Tuesday, June 21, 2022, in Miami. The Marlins scored five runs in the fourth inning. (AP Photo/Lynne Sladky)

MIAMI (AP) — Garrett Cooper lined a tiebreaking double in the eighth inning, and the Miami Marlins overcame a four-run deficit to beat the Colorado Rockies 9-8 on Tuesday night for just their third win in nine games.

Colorado led 4-0 before Miami scored five times in the fourth and three in the fifth to take an 8-5 lead. The Rockies tied the score 8-8 in the sixth after Cooper allowed Brendan Rodgers’ two-out grounder to first to get by him and into right field for an error that led to three unearned runs.

Nick Fortes began the eighth with a double against Alex Colomé (2-1), advanced on Jon Berti’s flyout to the right-field warning track and, with the infield in, scored on Cooper’s double.

“You try to slow the game down in those spots,” Cooper said. “I let those runs in by missing that ground ball, so I had to come up with something to help the team win.”

Steven Okert (4-0) pitched a perfect eighth, and Tanner Scott worked around a leadoff walk to Randal Grichuk in the ninth for his sixth save in seven chances.

Avisaíl García and Jesús Sánchez homered for the Marlins, who began a six-game homestand after a three-city, 11-day trip.

“It’s good to get a win, however you get it,” Miami manager Don Mattingly said. “You win ugly, you lose ugly. A lot of good stuff happened today. Down 4-0, it could have turned ugly.”

Colorado built a 4-0 lead on José Iglesias’ bases-loaded infield single in the second, Rodgers’ two-run double in the third and Ryan McMahon’s solo homer in the fourth.

The Marlins went ahead 5-4 in the fourth on Avisaíl Garcia’s three-run homer, Jesús Sánchez solo shot — his second homer off Ryan Feltner this season — and Jon Berti’s RBI single.

The 31-year-old García has struggled in his first season with the Marlins. The homer was his fifth this season after he connected for 29 with Milwaukee in 2021.

“Every good turn you have gives you confidence at the plate,” García said in Spanish. “It’s a new division for me and I am facing many new pitchers. I will continue to keep working hard and hopefully things will improve.”

Feltner gave up five runs and six hits in 3 2/3 innings.

“In the fourth, obviously, he got the ball up,” Rockies manager Bud Black said. “As that inning rolled on, it looked to be some misses with fastball. He’ll learn from this. He’ll learn that the fastball needs to be located.”

McMahon’s RBI double tied the score in the fifth. Sánchez and Miguel Rojas hit run-scoring singles in the bottom half, and Sánchez raced home for an 8-5 lead after Rojas got caught in a rundown between first and second.

The Marlins activated Sánchez and Aguilar from the injured list and optioned OF Jerar Encarnación and 1B Lewin Díaz to Triple-A Jacksonville.

CLOSE ENOUGH TO SUPPORT THE AVALANCHE

The Rockies spent an off-day in Miami Monday, prompting pitcher Kyle Freeland and his wife to board a jet for the approximate 60-minute flight to Tampa. The free time allowed Freeland to attend the third game of the Stanley Cup Finals between the Colorado and Tampa Bay.

The Marlins acquired 1B-C Ryan Lavarnway from Detroit for cash and signed free agent OF Billy Hamilton to a minor league deal. Lavarnway and Hamilton will report to Jacksonville.

Rockies: 3B-OF Kris Bryant (lower back strain) is scheduled to join Triple-A Albuquerque for rehab games in Las Vegas. The 2016 NL MVP has been sidelined since May 22.