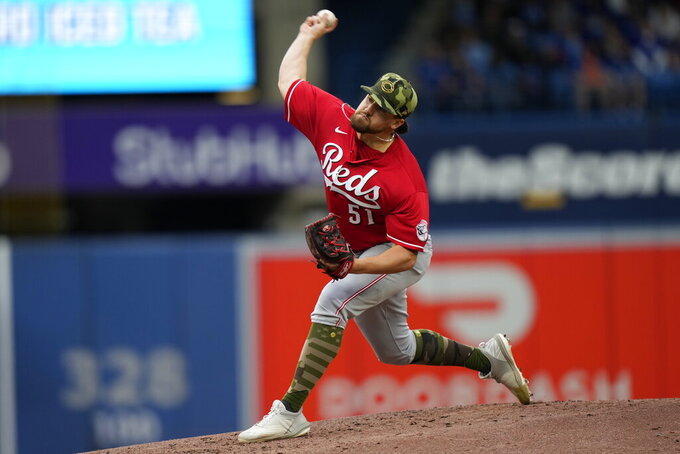 TORONTO (AP) — Joey Votto hit a tiebreaking homer in the eighth inning and the Cincinnati Reds held on to beat the Toronto Blue Jays 3-2 on Sunday, avoiding a three-game sweep.

Votto, who is from suburban Toronto, went deep for the fourth time in 12 career games at Rogers Centre.

The one-out solo drive to right field off Yimi Garcia (0-3) was Votto’s first home run of the season, and his third extra-base hit in three games since being activated off the injured list following a bout with COVID-19.

“Of course it’s great to be back here,” Votto said. “Playing in this city has great meaning to me, but I’m so locked in on performing well that, whether it’s here or elsewhere, I’m dialed in on making sure I perform well.”

Red manager David Bell said he “couldn’t be happier” to see Votto come up big north of the border.

“Being around him every day, I know how meaningful it is for him to do good things here in his hometown, but also how important it is for him to be a great player, to be a contributing player and to help us win a game,” Bell said.

The one-run win was the second of the season for the Reds. Cincinnati has won nine of 15 following a 3-22 start.

Toronto failed to complete a sweep after winning the first two games of a series for the fourth time this season and the second time this homestand. The Blue Jays dropped last Wednesday’s series finale to Seattle after victories Monday and Tuesday.

“The positive is we have been winning games without our offense being where it was expected to be,” manager Charlie Montoyo said.

Ashcraft’s first pitch was his hardest of the day, a 99.7 mph strike to George Springer.

“That definitely gave me a little ‘All right, you’re good, just do your thing,’” Ashcraft said. “It for sure helped a lot.”

Blue Jays left-hander Yusei Kikuchi walked three of the first four batters he faced, and five of the first seven Reds reached safely to begin the game, with Cincinnati taking a 2-0 lead on Aristides Aquino’s two-run double. Kikuchi escaped his second bases-loaded jam of the inning by striking out Taylor Motter.

Toronto answered in the second when Santiago Espinal hit a leadoff double and scored on Matt Chapman’s single, then tied it by scoring without a hit in the third. George Springer was hit by a pitch to start the inning, went to second on a wild pitch from Ashcraft, and scored on Bo Bichette’s RBI groundout.

Votto is 11 for 44 with four doubles, four homers and nine RBIs in his 12 games at Toronto.

Blue Jays pinch runner Vinny Capra was thrown out at second with Springer batting to end the sixth, while Cincinnati’s Tyler Stephenson was picked off first after his two-out single moved a runner into scoring position in the seventh.

Reds: LHP Mike Minor (shoulder) will make a fourth rehab start at Triple-A Louisville before rejoining the Reds. Minor allowed four runs and nine hits over 4 2/3 innings in a loss to Nashville Friday.

Reds: Cincinnati has not named a starter for Monday’s home game, the opener of a four-game series against the Cubs. RHP Marcus Stroman (1-4, 4.88) starts for Chicago.