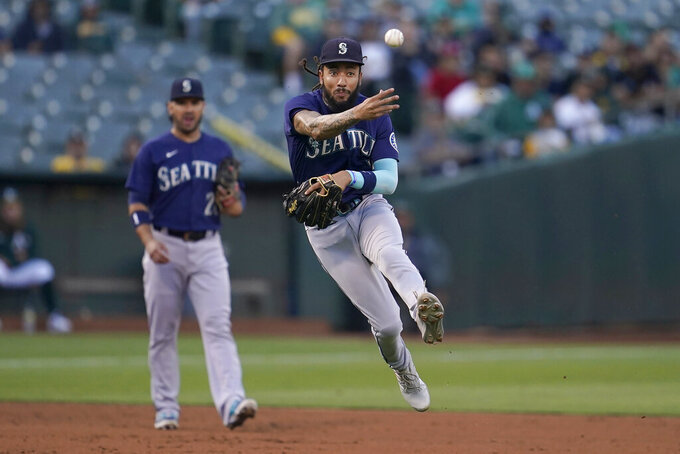 OAKLAND, Calif. (AP) — Eugenio Suarez homered twice and drove in five runs as the Seattle Mariners cruised to their fourth straight win, 10-2 over the Oakland Athletics on Friday night.

Marco Gonzales (8-12) allowed two runs over 5 1/3 innings and beat Oakland for the third time this season.

Seattle maintained a half-game lead over Toronto for the AL’s top wild card spot. The Mariners (66-54) are 37-15 over their last 52 games, best in the league over that span.

Suarez went deep twice off left-hander Cole Irvin (6-11), hitting a two-run homer in the fourth that put Seattle ahead 3-2 and then lining a three-run shot to center in the sixth to make it 6-2. Suarez has 22 homers this season, his first with Seattle, and 151 since 2018, the most in the majors during that span.

He also leads the majors in strikeouts with 158. But Mariners manager Scott Servais said Suarez is a huge boost because of his power and personality.

“He is streaky, you know? We knew that when we acquired him,” Servais said. “(But) he really controls the strike zone pretty well. He takes his walks. He just got the experience. He’s a fun guy to be around.”

Oakland scored twice off Gonzales in the first to take a 2-1 lead but went silent after that, losing to Seattle for the 20th time in 23 meetings. That includes 10 straight to the Mariners at the Oakland Coliseum, tied for the team’s second-longest home losing streak to one team since the franchise moved to Oakland in 1968.

“I thought outside of one hitter in that lineup that did all the damage, Cole pitched great,” A’s manager Mark Kotsay said. “We make a play defensively for him in the sixth inning, we’re out of the inning. So the line looks bad, but he pitched way better than the line.”

The A’s trailed 6-2 when they loaded the bases with one out in the sixth. But Matt Brash relieved Gonzales and struck out pinch-hitter Vimael Machin and retired another pinch-hitter, Tony Kemp, on a fielder’s-choice grounder.

Oakland promoted reliever Norge Ruiz, making him the 10th rookie on the A’s current 13-man pitching staff. The right-hander had a rough major league debut, allowing four runs, two earned, on six hits in 1 2/3 innings. Ruiz was a high-profile international signee out of Cuba in 2016, getting a $2 million signing bonus from Oakland, but he’d posted a 5.08 ERA over four-plus minor league seasons until cutting down on the walks this season and earning his first trip to the majors.

Mariners: LHP Matthew Boyd (flexor tendon strain) has turned in two scoreless one-inning relief appearances in his rehab assignment with Triple-A Tacoma. He’ll extend to two innings in his next outing, Servais said. Boyd could join Seattle’s bullpen in the next week or two.

Athletics: RHP Paul Blackburn (torn finger tendon) said he pitched through pain during his final four starts before being shut down for the season Tuesday. A first-time All-Star this season, Blackburn injured his right middle finger before his July 13 start at Texas. He said the discomfort progressively got worse and affected his ability to extend his finger and finish pitches. “I was hoping that it would just kind of go away,” he said. “... It just never went away. It got worse.” His finger will be in a cast for six to eight weeks, but he’s expected to be at full strength for spring training.