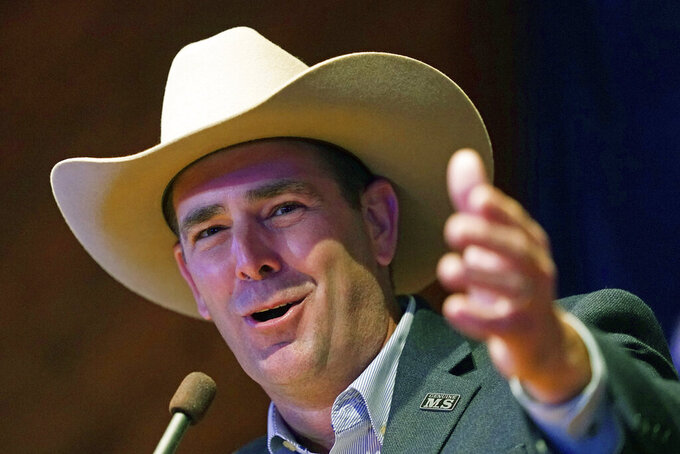 Rogelio V. Solis, ASSOCIATED PRESS
FILE - In this Nov. 3, 2020 file photo, Commissioner for Agriculture and Commerce Andy Gipson speaks at a reelection party for U.S. Sen. Cindy Hyde-Smith, R-Miss., in Jackson, Miss. Gipson is asking the U.S. Supreme Court to uphold abortion restrictions that he helped put into state law. The Republican was a state representative in 2018 when he co-sponsored a bill to ban most abortions after 15 weeks of pregnancy. Now, a court battle over that law could reshape abortion access to abortion across the United States.(AP Photo/Rogelio V. Solis, File)

Gipson is a Republican and was a state representative and chairman of the House Judiciary B Committee in 2018 when he co-sponsored a bill to ban most abortions after 15 weeks of pregnancy. The Supreme Court's ruling in a court fight over that law could reshape abortion access across the United States.

The Mississippi law has never been enforced because the state's only abortion clinic quickly sued, and a federal judge ruled that the 15-week limit was unconstitutional.

A conservative federal appeals court said in 2019 that the judge had ruled correctly, and the U.S. Supreme Court agreed this year to consider the case. Arguments are scheduled for Dec. 1.

The Mississippi case and a more recently developed fight over a Texas law that would ban most abortions at around six weeks are first big abortion-rights tests in a Supreme Court reshaped with three conservative justices nominated by former President Donald Trump.

Hundreds of people and groups have filed briefs before the Supreme Court to argue for or against the Mississippi law. Gipson, who is also a Baptist minister, filed a brief July 29 arguing that Mississippi law does not impose an undue burden.

"For women who choose to continue their pregnancies, Mississippi offers a number of resources to support them through birth and throughout the child-rearing years," Gipson's attorneys wrote.

“In short, Mississippi strives to assist any woman who needs resources to care for a child, whether born or unborn,” Gipson's attorneys wrote.

In a news release Wednesday, the acting president of NARAL Pro-Choice America, Adrienne Kimmell, called on Congress to enact a federal law to protect abortion rights. She criticized Mississippi for asking the Supreme Court to overturn Roe v. Wade.

“With a supermajority on the Supreme Court openly hostile to reproductive freedom, we are at a moment of crisis — and the future of legal abortion hangs in the balance,” Kimmell said. "No matter the spin the Court’s anti-choice justices may use to avoid laying bare their extremist agenda, the reality is that upholding Mississippi’s ban on abortion would overturn Roe v. Wade."

Mississippi's only abortion clinic, Jackson Women’s Health Organization, remains open and offers abortions up to 16 weeks of pregnancy. Clinic director Shannon Brewer has said about 10% of its abortions there are done after the 15th week.

More than 90% of abortions in the U.S. take place in the first 13 weeks of pregnancy, according to the Centers for Disease Control and Prevention.

Fitch was elected Mississippi attorney general in 2019 and took office in 2020. In addition to challenging Roe v. Wade, her written arguments to the Supreme Court challenge the court's 1992 decision in a Pennsylvania abortion case. Both rulings said states may not put an undue burden on abortion before viability. The Mississippi attorney general's office argues that the rulings are “egregiously wrong.”

Viability occurs roughly at 24 weeks, the point at which babies are more likely to survive outside the womb. The Mississippi clinic has presented evidence that viability is impossible at 15 weeks.

The Mississippi attorney general argues that viability is an arbitrary standard that doesn’t take sufficient account of the state’s interest in regulating abortion.

The Mississippi law would allow exceptions to the 15-week ban in cases of medical emergency or severe fetal abnormality. Doctors found in violation of the ban would face mandatory suspension or revocation of their medical license.