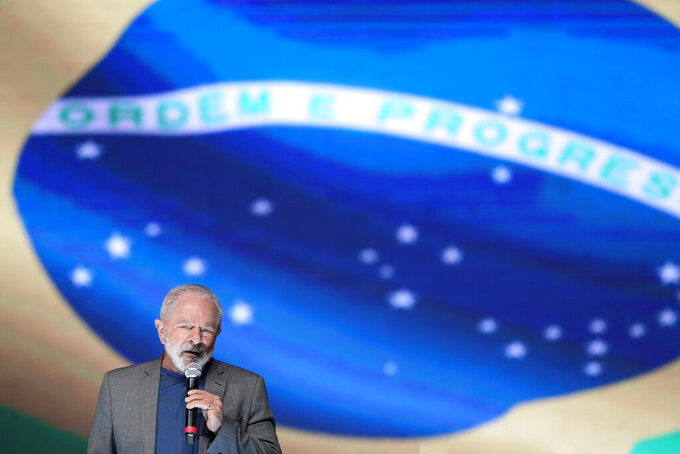 SAO PAULO (AP) — Luiz Inácio Lula da Silva, who governed Brazil in 2003-2010, was confirmed Thursday as the presidential candidate for the leftist Workers' Party ahead of October's election.

The vote of party delegates at a hotel in Sao Paulo was widely expected and merely symbolic, with da Silva's campaign already on the move. The 76-year-old didn't attend the party's convention as he is campaigning in his home state of Pernambuco in Brazil's impoverished northeast. He leads all polls against incumbent President Jair Bolsonaro.

This year will mark the sixth presidential bid by da Silva, who Brazilians universally refer to as Lula. Da Silva was also confirmed as the Workers' Party candidate in its 2018 convention, then a corruption and money laundering conviction removed him from the race and paved the way for Bolsonaro's victory.

“I didn't need to be president again. I could save my diploma of best president ever and live the last years of my life quietly,” da Silva said during a rally in the city of Recife. “But I saw this country being destroyed. I saw our education being led by a guy who doesn't like education. So I decided to come back.”

The former union leader was released from prison in 2019 and his convictions were quashed last year after the Supreme Court ruled the judge presiding over the case, Sergio Moro, was biased. That enabled da Silva's presidential run this year. Moro, who oversaw the sprawling “Car Wash” corruption probe, later became Bolsonaro's justice minister.

Da Silva has hinted in interviews that this year's run will be his last campaign for the highest office and that he wouldn't seek a second term if elected again. He has tried to reach out to moderates as the nation remains fiercely polarized, particularly with his selection of a conservative running mate, Geraldo Alckmin, the former governor of Sao Paulo.

Bolsonaro, a far-right politician, has characterized the upcoming race as a battle of good vs. evil. He has also presented unsubstantiated claims that Brazil's electronic voting system is susceptible to fraud, which many analysts have said indicates he is laying the groundwork to reject election results. Bolsonaro's Liberal Party will hold its convention Sunday to confirm him as its candidate.

Leftist politician Ciro Gomes made his candidacy official Wednesday. He has been third in opinion polls, but trailing far behind da Silva and Bolsonaro.

Da Silva was backed by 47% of likely voters in the Oct. 2 election and Bolsonaro by 28%, according to the Datapolha poll from June, which had a margin for error of two percentage points. That puts da Silva within striking distance of an outright victory in the first round, with no runoff needed, though analysts have said they expect the race to tighten in coming months.