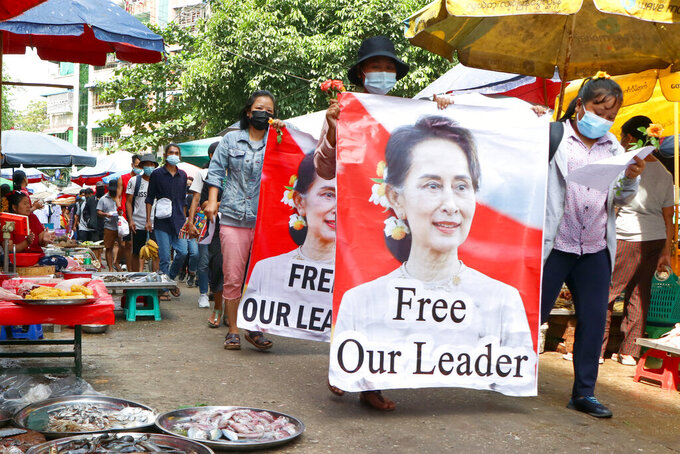 Uncredited, ASSOCIATED PRESS
FILE - Protesters walk through a market with posters of ousted Myanmar leader Aung San Suu Kyi at Kamayut township in Yangon, Myanmar, on April 8, 2021. Myanmar’s ousted leader Aung San Suu Kyi has testified in a prison courtroom in the capital Naypyitaw for the first time in her official secrets case. Suu Kyi, who has been detained since her government was ousted last year by the military, is being tried with Australian economist Sean Turnell and three former Cabinet members on the same charge, which is punishable by up to 14 years in prison. (AP Photo, File)

Suu Kyi, who has been detained since the military ousted her government last year, is being tried in Naypyitaw with Australian economist Sean Turnell and three former Cabinet members on the same charge, which is punishable by up to 14 years in prison.

Suu Kyi denied all the accusations in the case against her and pleaded not guilty, said the legal official, who spoke on condition of anonymity because he is not authorized to release information.

Sean Turnell, an economist at Sydney’s Macquarie University, was an adviser to Suu Kyi.

The colonial-era secrets statute criminalizes the possession, collection, recording, publishing or sharing of state information that is “directly or indirectly, useful to an enemy.”

The exact details of the alleged offense in the case have not been made public, though Myanmar state television, citing government statements, said last year that Turnell had access to “secret state financial information” and had tried to flee the country.

She earlier was sentenced to 11 years in prison after being convicted on charges of illegally importing and possessing walkie-talkies, violating coronavirus restrictions, sedition and another a corruption charge, bringing her total prison term to 17 years. Trials on several other charges are ongoing.

Suu Kyi’s supporters and independent analysts say the charges are politically motivated and are an attempt to discredit her and legitimize the military’s seizure of power while keeping her from returning to politics.

Details of Thursday's proceedings were not available because Suu Kyi's lawyers have been banned by a gag order since last year from revealing information about her trials, all of which are closed to the media and the public.

The legal official said Suu Kyi appeared to be in good health.

Another co-defendant, former Union Minister Kyaw Win, is scheduled to testify next week.

Turnell testified last week, also denying the accusations against him. He and Suu Kyi are both being held in the prison where the trial is being conducted in a special courtroom.

Suu Kyi is also being tried there on an election fraud charge, which is punishable by up to three years in prison, and seven counts of corruption which each carry a maximum sentence of 15 years and a fine.

The army’s takeover last year was met with nationwide peaceful protests. After security forces unleashed lethal force against the protesters, some opponents of military rule turned to armed resistance in many areas.