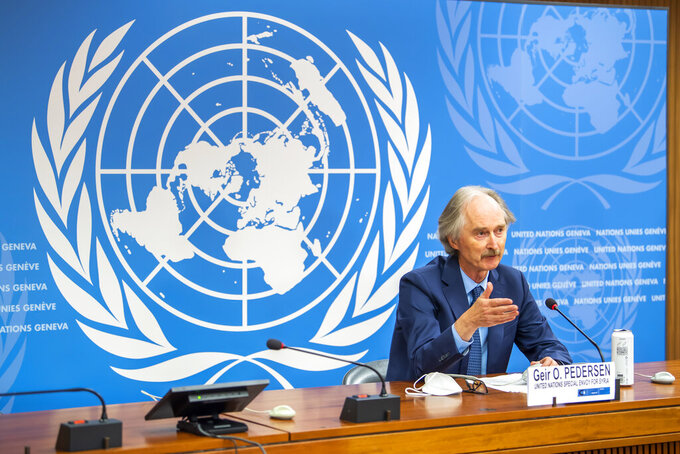 MARTIAL TREZZINI, ASSOCIATED PRESS
Geir O. Pedersen, UN Special Envoy for Syria, speaks to the media about the sixth session of the Constitutional Committee Small Body, during a press conference at the European headquarters of the United Nations in Geneva, Switzerland, Sunday, Oct. 17, 2021. (Martial Trezzini/Keystone via AP)

BEIRUT (AP) — The first round of talks between the Syrian government and the opposition to draft constitutional reforms in Geneva ended in disappointment and no new date has been set for the next meeting, the United Nations envoy for Syria said Friday.

The talks started Monday following a nine-month hiatus of the U.N.-led meetings of the Syrian constitutional committee where government, opposition and civil society are represented.

This week, the delegations returned to Geneva after mediation by Geir Pedersen, the U.N. envoy for Syria. They had agreed on a mechanism to begin drafting the constitution for the war-torn country, part of the U.N.-led political process, since 2012, aimed at ending the decade-old conflict.

But Pedersen said discussions on Friday were a “big disappointment” when it was time to find a provisional agreement or at least identify areas of disagreement. Over the last four days, each side presented their view on four basic principles, divided among them.

“We didn’t manage to achieve what we had hoped to achieve; that we would have a good discussion on how to reach forward on some kind of consensus,” Pedersen told reporters. “We lacked a proper understanding on how to move that process forward.”

The government delegation had prepared a text on Syria’s sovereignty, independence and territorial integrity and on terrorism. Representatives of the exiled opposition drafted a text on the armed forces, security and intelligence agencies, while civil society groups wrote the section on the rule of law.

Pedersen said the last day of talks didn’t produce any understanding between the different delegations.

It was not immediately clear what they disagreed on, but the government and opposition representatives later traded blame for the failure.

Syria’s 10-year conflict has killed between 350,000 and 450,000 people and displaced half the country’s pre-war 23 million population, including more than 5 million refugees mostly in neighboring countries. Even though the fighting has subsided in the last months, there are still pockets controlled by Syrian opposition, where millions of people live. Nine out of ten Syrians live in poverty while the country's infrastructure is in ruins.

A government representative, Ahmad Kuzbari, said some of the principles presented by the opposition were “out of touch with reality” and said some of them sought to legitimize the presence of foreign troops in Syria.

Hadi Albahra, an opposition representative, said the government side did not produce any consensus paper, neither did it have the will to do so.

Pedersen said there was no agreement on a new date for the next meeting.

“We need to develop a proper understanding on how we could move this into a proper substantial drafting process,” Pedersen told reporters.

Pedersen announced late September an agreement on “methodology” for a sixth round that involved regular meetings between him and the heads of delegations.

At a Russia-hosted Syrian peace conference in January 2018, an agreement was reached to form a 150-member committee to draft a new constitution. It took over a year to agree on the composition the 45-member committee.

The 2012 U.N. road map to peace in Syria calls for the drafting of a new constitution and ends with U.N.-supervised elections with all Syrians, including members of the diaspora, eligible to participate.

The United States and several Western allies accused Assad of deliberately stalling and delaying the drafting of a new constitution until after presidential elections to avoid a U.N.-supervised vote, as called for by the Security Council.

In late May, Assad was re-elected in what the government called a landslide for a fourth seven-year term. The West and his opposition described the election as illegitimate and a sham.