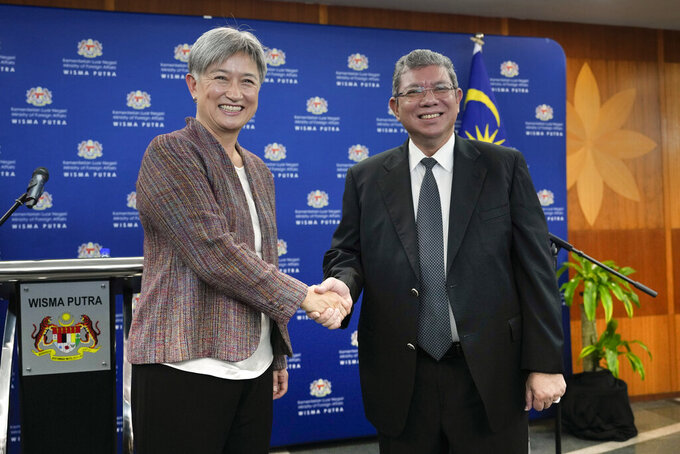 PUTRAJAYA, Malaysia (AP) — Australian Foreign Minister Penny Wong stressed Tuesday that her country's security pact with the U.K. and the U.S. will not create nuclear weapons, and said she hoped concerns that it may spark a regional arms race would dissipate over time.

“We are not a nuclear power. There are nuclear powers in this region, but Australia is not one of them,” Wong told a news conference after meeting with her Malaysian counterpart, Saifuddin Abdullah.

Under the agreement, called AUKUS, Australia is to acquire nuclear-powered submarines. Some countries in the Association of Southeast Asian Nations, including Malaysia, fear the pact could escalate tensions in hot spots such as the disputed South China Sea, much of which is claimed by China, and have warned the pact will threaten regional stability.

“We remain very clear that we do not seek, nor would we ever seek to arm, (to) have any nuclear capability on our submarines," she said. “I think sometimes people hear the word nuclear, and I understand there’s a response to that, (but) we are talking about nuclear propulsion, not nuclear weapons."

“We are worried that some other major economies will take advantage of AUKUS,” he said in an interview with Japan's Nikkei newspaper in May. “For example, if China wants to help North Korea purchase nuclear-powered submarines, we can’t say no because AUKUS has set a precedent.”

Wong said Australia's new government, sworn in on June 1, is committed to ensuring the region is peaceful, stable and prosperous. “And importantly, a region where rules enable some predictability to state behavior and to the way in which disputes would be dealt with," she said.

Wong said she explained Australia's stance to Saifuddin and to her counterparts in Vietnam and Indonesia during visits there. “We hope that over time, you know, people’s concerns will be able to be allayed," she said.

“Malaysia highly values the regional peace and security of the ASEAN region, and we want to maintain the South China Sea in particular and the region itself as a region of peace, of commerce, of prosperity," he said at the same news conference.

Wong is traveling next to Kota Kinabalu, the capital of eastern Sabah state on Borneo island. Wong, who has a Malaysian father, has said she is looking forward to visiting her birth city where she spent her early years.