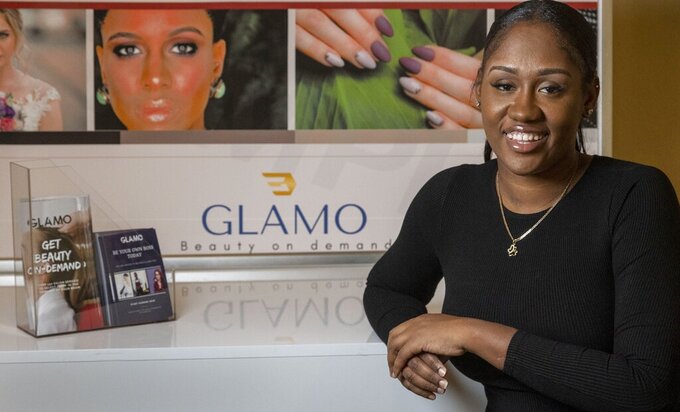 Jose A Iglesias, ASSOCIATED PRESS
Rishielle Giscombe launched Glamo, an App that combines her passions for beauty and tech and connects local consumers with salon services like hair and nails. (Jose A. Iglesias/Miami Herald via AP)

Miami entrepreneur Rishielle Giscombe is undeterred. In an effort to transform hair care in the South Florida tech space, Giscombe applied her interest and expertise in beauty to develop an app that connects stylists with clients.

Her business, Glamo, was born out of providing rides to elderly people in 2015 and treating them free trims, blowouts and crochet braids once they arrived home. As Giscombe began to build clientele, she put flyers on gas station windows, left them in beauty supply stores, and handed them out at Coral Square mall. Giscombe even went door to door.

As a Black, female immigrant from Jamaica, Giscombe said she can be easily left out in the tech space, but doesn’t allow what she calls tech’s “cookie-cutter” tendencies to dissuade her drive to excel.

“I want people to judge me based on my determination to actually have a successful company,” she told The Miami Herald. “That’s why I am where I am today.”

Glamo launched in 2018 and connects consumers with more than 100 nail, hair and makeup stylists in the South Florida area. Glamo receives a fee every time an appointment is booked through the app.

Amid the #MiamiTech wave that has swept over the city in the past year, Black entrepreneurs are molding their own avenues of success. Their aims are the same as that of other tech founders — but with greater urgency: to create generational wealth while uplifting and empowering Black and Brown communities through innovation.

“I am leaning on the resources that I already have, and the relationships and resources that I do know work,” said Dani Spikes, founder of BeLoved Box, a monthly subscription self-care and beauty box company, which has now reached seven-figure sales numbers since its founding in 2016.

Spikes said the new Miami tech boom has not lived up to its diversity ideals. Indeed, the list of the top 40 venture capital deals in Miami for 2021 through Aug. 3 consists of just one Black-founded startup: Toast Distillers, one of the nation’s few Black-owned distilleries best known for its Toast Vodka brand, which received less than $100,000 in an angel investment, according to Pitchbook.

“I have been over-mentored and under-funded,” Spikes said.

For eight years, Felecia Hatcher has been at the forefront of bringing Black tech workers into the broader Miami tech fold. Prior to her co-founding The Center for Black Innovation (initially called Code Fever) in 2013, virtually no Black tech community existed in South Florida.

Hatcher says some major corporations even asked her to change the name of Blacktech Week, another initiative she’d pioneered, to receive sponsorship funding. Venture capitalists would attend the expo so they could say that they’d participated in a diversity event and make false promises to Black founders, ignoring their calls and investment meetings, she said.

Black founders, Hatcher continued, are not experiencing the uptick in investment seen in other parts of the tech ecosystem. Meanwhile, tech spaces like the Center for Black Innovation in Overtown are underutilized by the larger tech community.

The City of Miami has provided $500,000 in funding to support programming at the Center for Black Innovation and hosted an innovation tour with the “5000 Role Models of Excellence” project in October to educate students on cryptocurrency, according to the city’s communications director, Soledad Cedro.

“As our Miami pursues becoming the ‘capital of capital’ it is crucial that we create robust pathways for Black and Brown founders to be central to the narrative of what we are building together,” Mayor Francis Suarez said in an email. “The ethos of our movement is community first and that begins by ensuring every one of our residents is at the opportunity table.”

Doris Jean Pierre founded AccessBridge in 2018 after facing rejection in the field of healthcare administration because she had little experience. AccessBridge aims to prepare diverse talent for the workforce through career exploration, leadership development and connecting participants with internships.

“Healthcare organizations were saying that the reason why they don’t have a diverse workforce is because they don’t know where to find Black and Brown talent,” said Jean Pierre, 27. “So, for me, it’s, ‘Here we are. You come to us.’”

BootUp founder Chandler Malone moved to Miami from Tulsa, Oklahoma, in search of capital and talent. BootUp helps tech boot camps and vocational training programs find and place candidates, making it easier for people without experience to break into the tech space.

Although Boot Up, which launched in June, doesn’t have a diversity and inclusion focus, Malone said the pipeline to acquiring software engineering or digital marketing skills is more accessible than going to college, with 78% of its candidates from underrepresented communities. Candidates don’t pay for enrolling in a program, he said, and are only charged once they’ve landed a job with a specific income threshold.

“What we would love to do is see folks who have historically been underrepresented in tech leverage us as a way to break into tech in a faster, lower cost, higher fidelity way,” said Malone, 27.

As an angel investor and venture partner at Atento Capital, a Tulsa-based investment fund, Malone said he gains fulfillment from investing in Black founders. He recognizes the benefits of Black networks, as well as fostering the seeds for younger generations who can bring unique value to the tech space.

“I really want to help people improve quality of life through getting into tech,” Malone said, “and, like a secret close to heart, would love to see more Black folks getting into tech and what that could do for us.”

Derick Pearson, president and executive director for the Center for Black Innovation, wants to ensure Black tech founders in or moving to Miami can participate in the growing tech economy, rather than transplant the barriers that exist in Silicon Valley, Los Angeles and New York.

Pearson said he has continued to pivot to meet the needs of the Black communities. He co-founded Tribe, a co-working space in Overtown that connects minority-led startup founders with opportunities and capital, as well as helped launch one of the first groups to take part in the Ecosystem Builders Fellowship program in June, where entrepreneurs raised more than $400,000 for their businesses.

Black people have influenced everything from culture to purchasing power, Pearson said. By depriving people of livable wages and resources to build wealth and prosperity, you create a cancer throughout the nation, he said. In the long term, he wants the Center for Black Innovation to become irrelevant in a future city where #MiamiTech will mean that innovation deserts are extinct and equitable pathways to capital exist for Black entrepreneurs and communities.

“If you want to have a more resilient, more ruthless and responsive civilization in the United States, you need to make sure that all parties that make up the body of American citizens, or active participants, are looked after,” Pearson said. “They’re not disenfranchised, they’re not marginalized, they’re not quieted, they’re not oppressed, and they’re active.”

Rob Wile contributed to this story.