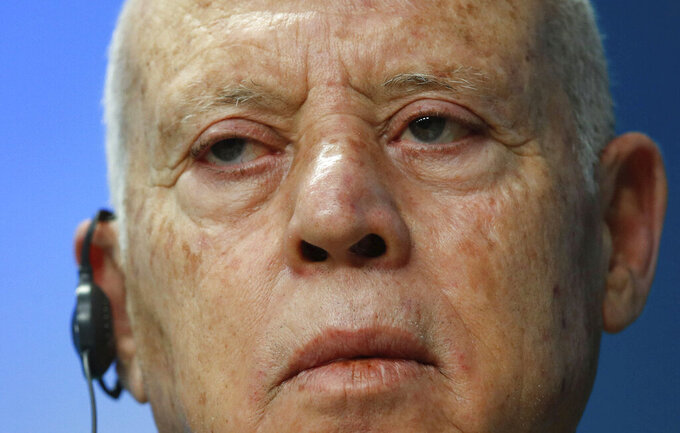 TUNIS, Tunisia (AP) — Tunisian lawyers and judges held a small protest outside the capital’s courts Wednesday as part of their weeklong strike following the president’s dismissal of 57 judges.

President Kais Saied's removal of the judges was the latest sign of growing interference in the judiciary as he tightens his grip on power. Critics accused Saied of staging a coup in July 2021 after he sacked the government and took on executive powers.

Dozens of lawyers and activists gathered on the steps of the Palace of Justice in Tunis to denounce Saied's actions. Some shouted “Down with the coup," and others chanted, “Judicial authority, no police orders.”

Several lawyers told The Associated Press they would continue their opposition to the president's actions, which include ditching Tunisia’s 2014 constitution to rule instead by decree.

Saied's dismissal of the judges was “illegal and false,” lawyer Amel Miladi said. The firings didn’t follow the laws “made to protect citizens… laws that are anchored in Tunisian constitutional law,” she said.

Miladi said she thinks the strike has been successful, and would continue. Another lawyer, Nawel Toumi said that they intended to “continue this movement and continue to say no”.

Last week, Saied justified his actions by listing a long series of accusations with scant evidence against dozens of judges, ranging from alleged corruption and the illegal amassing of wealth to protecting terrorists and sexual harassment.

Hundreds of judges unanimously voted over the weekend to hold a sit-in and strike. They accused the president of ignoring the constitution and removing judges without “recourse to disciplinary procedure.”

Courtrooms across the North African country have been closed since Monday. Anas Hamadi, president of the Association of Tunisian Magistrates, said 99% of judges participated on the first day of the strike. The protest will continue until the dismissed jurists are reinstated, Hamadi said.

In response, Saied ordered judges’ salaries to be reduced in accordance with the number of strike days.

Constitutional law professor and opposition figure Jawher Ben Mbarek told the AP that he had attended Wednesday’s protest to support the judiciary’s independence in the wake of Saied’s “attacks on the justice system and the judiciary body”.

“(Saied) has regularly harassed judges and the justice system… he has given himself the right to unilaterally fire judges, without a motive or an official investigation. This is an apprentice dictator that is trying to restore the dictatorial system that Tunisians got rid of in 2011” said Ben Mbarek.

Ben Mbarek added that for the first time since 25 July, when Saied first froze Parliament, the political crisis had extended to include state institutions.

“The judiciary is an sovereign institution of the Tunisian state, and now it is in conflict with the President of the Republic. It’s a new fact -- for the first time, the state itself is resisting Kais Saied. This is new and I think this will be fatal for him.”

Saied conferred on himself sweeping powers last year, measures the president claimed were needed to “save the country from imminent peril” and to fight widespread corruption.

Earlier this year, he replaced Tunisia's Supreme Judicial Council. The council had been a key guarantor of judicial independence since the country's 2011 revolution, which deposed a longtime autocratic leader and introduced democratic reforms.

Under pressure from Tunisia’s allies, who are concerned about democratic backsliding in the country, Saied laid out a roadmap that foresees organizing a July 25 referendum on political reforms and a Dec. 17 parliamentary election.