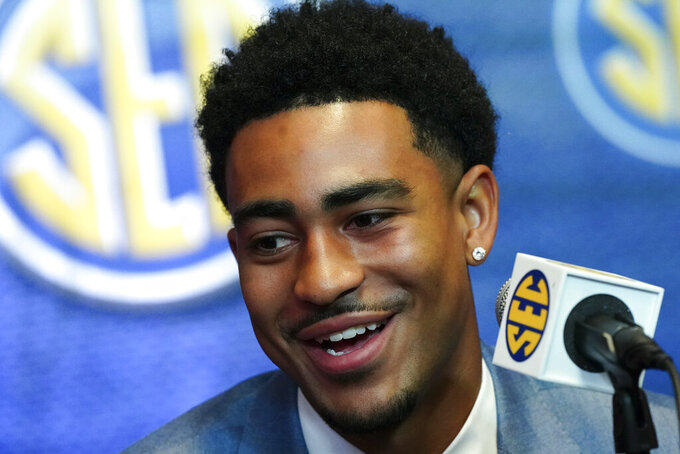 ATLANTA (AP) — Nick Saban has been vocal about his issues with the status quo in name, image and likeness deals and their use in recruiting.

But it's not like Alabama's coach and his players haven't benefited, too. Saban said Crimson Tide players have made more than $3 million in NIL money.

“The biggest concern is how does this impact and affect recruiting?” he said Tuesday at the Southeastern Conference Media Days. "On the recruiting trail right now, there’s a lot of people using this as inducements to go to their school by making promises they may or may not be able to keep in terms of what players are doing.

The $3 million figure stands out for another reason: Very few schools have shared details about how much their athletes make on NIL deals, but the number is growing since it could be seen as a way to show recruits another benefit to signing. Earlier this year, Ohio State said its athletes had earned $2.98 million over the first six months of the NIL era.

The touchy topic boiled over in the offseason after Saban singled out Texas A&M and other schools for using the NIL deals in recruiting. Aggies coach Jimbo Fisher fired back at his former boss and denied any wrongdoing in his program, which landed the No. 1 recruiting class in the country.

“I think they both kind of illustrate the frustration of how things are right now,” Mississippi State coach Mike Leach said. “It’s not sustainable, so something’s going to change.”

Leach says as things stand “college athletes have more privileges than anybody at any other professional level.”

“Go up to your next favorite NFL guy, say: ‘Hey, I heard in the NFL they’re going to have unmitigated free agency, 365, 24/7. And, by the way, there’s not going to be any salary cap or draft, you’re just going to have bidding wars,’” Leach said. “Just watch the expression on their face. Don’t look at anything else or write down any notes because the expression on their face will be well worth it.”

Alabama quarterback Bryce Young says he can't afford to rest coming off his Heisman Trophy-winning season. That is, after all, old news.

“I don't feel like I'm a finished product by any means," Young said. “I have a lot of stuff I want to keep getting better at.

“The way I look at it, it’s an award that celebrates the past, which is an honor, but it doesn’t entitle me to anything in the future."

Young is trying to join Archie Griffin (1964 and 1965) as the only two-time Heisman winner.

Shane Beamer didn’t let any of his fellow SEC coaches upstage him at media days, not even Alabama’s Saban.

South Carolina released a hype video on social media of Beamer ahead of his appearance at the podium. It showed Beamer swaggering into a team meeting room to Soulja Boy’s “Turn My Swag On" earlier Tuesday in Columbia. Players wiped his brow, handed him a Gamecocks cap (which he placed on backward) and some shades.

Beamer showed off a few moves while players held up lights in the background.

“Walked in, changed clothes, knocked it out in three takes,” he said later in Atlanta. “Had a lot of fun doing it as well. I was a little bit taken aback because one of our players thought I needed to hear the song so I knew what the song was and I knew what the words were. I’m not that old. I know who Soulja Boy is. I know some of the words to that song. It was an easy ask.”

“It’s all about moving the ball,” Lea said. “One way to do that is with a mobile quarterback. Mike Wright is one of the best in the country in that respect.

“We want him to develop as a total quarterback, which he is. He’s demonstrated leadership abilities, too. We’re excited for him to enter the fall as our starting quarterback. He knows that he has to earn that every day. That’s part of our covenant.”

Wright flashed his personality and sartorial style, enthusiastically discussing his suit purchased in Atlanta and sporting a red carnation.

“I’m a big fashion guy,” he said, giving a shout-out to his suit guy.