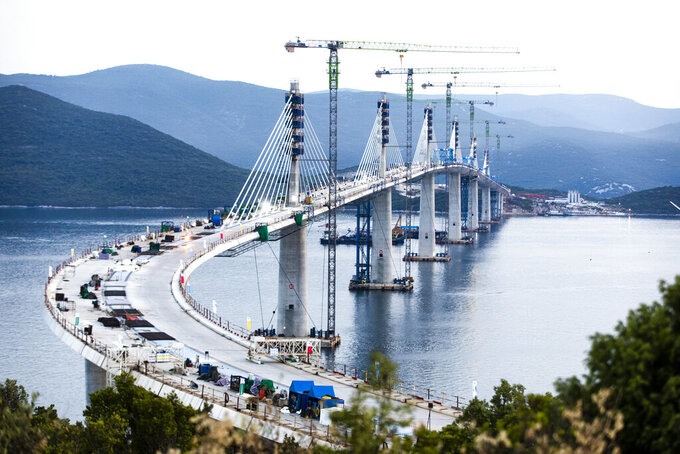 Uncredited, ASSOCIATED PRESS
A view of the construction of Peljesac Bridge in Komarna, Croatia, Wednesday, July 28, 2021. European Union-funded Peljesac Bridge in southern Croatia that has been built by a Chinese state-owned company was opened late Wednesday. The bridge was designed to connect two swaths of Adriatic Sea coastline and passes over a small stretch of Bosnia's territory. (AP Photo) 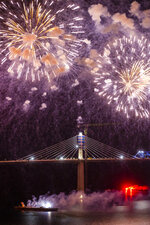 ZAGREB, Croatia (AP) — A major European Union-funded bridge built by a Chinese company has been connected over the Adriatic Sea, linking two swaths of the Croatian coastline that are divided by a small stretch of Bosnia’s territory.

The China Road and Bridge Corporation (CRBC) in 2018 won an international bid to construct a 2.4-kilometer (1.5-mile) long bridge. The 420-million-euro ($500 million) construction is 85% financed by the EU and is a rare Chinese project in Europe that went through a regular bidding process.

After the final segment of the span was installed, a midnight opening ceremony on the spectacular bridge featured folk dancers, singing and a huge fireworks display.

Croatian Prime Minister Andrej Plenkovic said during the ceremony that the bridge represents “a fascinating strategic accomplishment of the Croatian people and their state” that fulfils their long-time dream to have the Adriatic coastline connected.

The bridge and its connecting roads are expected to be completed by June of next year. Until then, road travelers wanting to visit some of Croatia’s most attractive tourist destinations, such as the Old Town section of Dubrovnik, will still have to pass through two border checkpoints between Bosnia and Croatia at the Bosnian seaside port of Neum.

Bosnian officials were not happy when the construction started, claiming the bridge that circumvents Bosnian territory violates the state's sovereign access to open seas in the Adriatic.

Plenkovic said the bridge will not divide, but it will connect people and nations.

“The bridge does not connect only Croatia, but it connects the EU as well as Bosnia-Herzegovina,” he said.

In recent years, China has been pouring funds into Central and Eastern European countries as part of its strategic Belt and Road project, which includes upgrading infrastructure and is aimed at creating a network of transportation and trade links between China and Europe.

EU officials, however, worry that the Chinese investments boost the Asian country’s economic and political clout in the region, which is still reeling from the bloody 1990s breakup of the former Yugoslavia.