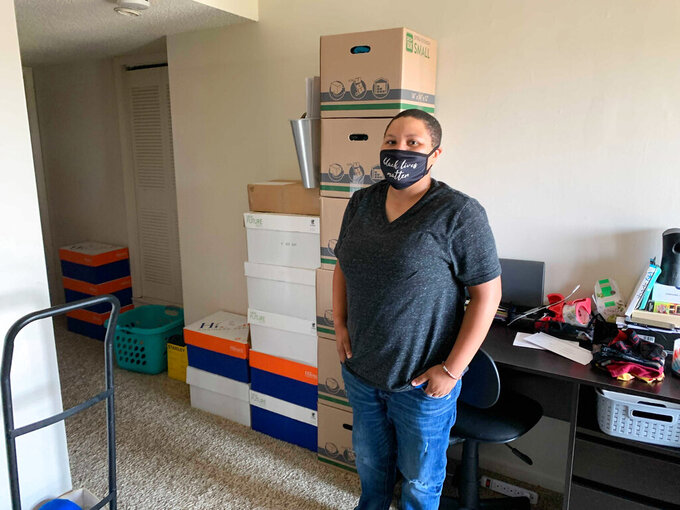 Heather Hollingsworth, ASSOCIATED PRESS
Denise Wall, stands in her home Friday, June 18, 2021, in Shawnee, Kan. A judge in Kansas' most populous county is beginning to evict tenants who are behind on rent in advance of a federal moratorium expiring at the end of the month in an early sign of what is to come as experts predict a tide of people being forced from their homes nationwide. "We thought 2021 was going to be better and it is turning out to be just as bad," said Denise Wall, who applied for rental aid in March but is still trying to find out whether she qualifies. (AP Photo/Heather Hollingsworth)

SHAWNEE, Kan. (AP) — A Kansas judge is beginning to evict tenants who are behind on rent in advance of the expiration of a federal moratorium that some experts predict will bring a tide of people being forced from homes nationwide.

Johnson County Magistrate Judge Daniel Vokins said during a Zoom eviction hearing this week that he doesn't think the moratorium, which was issued last year by the the Centers for Disease Control and Prevention and expires at the end of the month, is enforceable.

Eric Dunn, director of litigation for the National Housing Law Project, said he has heard of judges elsewhere — including in Florida, Georgia and North Carolina — ignoring the CDC moratorium, but couldn't say whether it's been a widespread practice.

The federal moratorium has kept many tenants owing back rent housed. More than 4 million people nationally say they fear being evicted or foreclosed upon in the months following its expiration, census data shows. Making matters worse, the tens of billions of dollars in federal emergency rental assistance that was supposed to solve the problem has not reached most tenants.

“We thought 2021 was going to be better and it is turning out to be just as bad,” said Denise Wall, 31, of the Kansas City suburb of Shawnee, who applied for rental aid in March but is still trying to find out whether she qualifies.

She lost her job as a cook as the pandemic started and was out of work for nearly a year before beginning another job in April as a medical courier, picking up and delivering tests. Vokins set her case for trial on July 2.

“This wasn’t anything any of us asked for," she said in a Friday interview at her apartment, where she and her wife have been collecting boxes as they look for a new place to live. Her wife's three sons also live with them part of the time.

Vokins noted in moving forward on evictions that a federal judge last month found the CDC exceeded its authority when it imposed the moratorium last year. He said the ruling means that “any current or future moratorium order issued by the CDC is not valid."

Kansas also had its own eviction moratorium, but it expired at the end of last month. Vokins said that means that “the eviction laws prior to the pandemic in March 2020 is the current law today."

Casey Johnson, an attorney for the non-profit law firm Kansas Legal Services, noted the federal ruling was issued in the 6th Circuit and wasn't binding in Kansas, which is in the 10th Circuit.

“Basically he’s choosing to accept that ruling even though he doesn’t have to," Johnson said.

Vokins encouraged renters and landlords to work together to obtain emergency rental funds but said he would only pause court proceedings if both sides agreed to the delay.

Two other tenants who appeared before Vokins on Thursday said they were seeking the federal rental aid. A third tenant who couldn't get his sound to work and only was able to communicate with thumbs up and thumbs down hand motions sent an email to the court later in the day saying that he also had applied.

Kansas is now distributing $200 million in federal rental assistance. The Kansas Housing Resources Corp., the state’s housing finance agency, which is responsible for distributing the money in every community except Wichita, has distributed $5.5 million so far to help 956 of the 7,780 households that have applied.

The state received another $20 million in rental assistance last year and handed out $17 million of it, said Emily Sharp, a spokeswoman for the agency.

“The second round of funding has much more stringent federal guidelines, so it is much more difficult for us to award that funding because quite honestly the applicants have more hoops to jump through,” Sharp said. Besides rent, that money also can go toward utilities and internet expenses.

Luke Demaree, an attorney for Fox Run Apartments, said apartment staff is in constant contact with the agency but can’t get details on who is approved or when to expect the money.

Karen Nations, who also represented landlords at the hearing, said the moratorium has been difficult.

“Landlords have been struggling to pay their bills, and people have taken advantage of the moratorium," she said, adding that some who can afford to pay their rent are not. “It is a very tricky balancing act to get the mortgage paid if you’re not getting your rent.”

Mike Casey contributed to this report from Manchester, N.H.