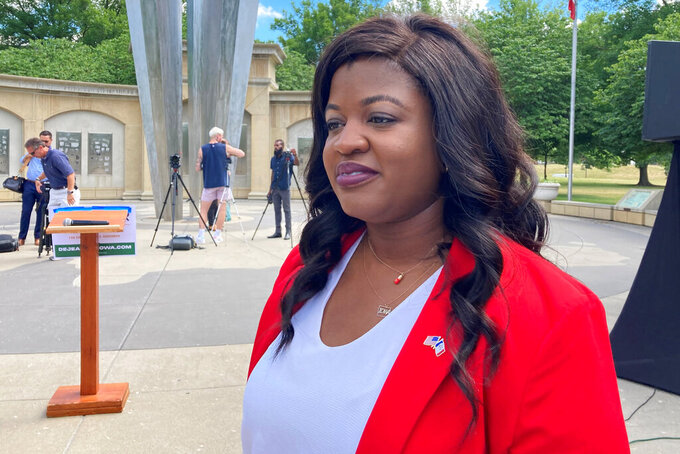 Democrat Deidre DeJear said she has asked Reynolds for three debates but has received no response to multiple invitations with about 90 days to go until the election.

“The people of Iowa have a right to hear from my opponent and I on key issues impacting our state and the respective direction we intend to move Iowa in, " DeJear said.

DeJear said third-party sponsors have reached out to Reynolds to schedule debates but have not received a response.

“The governor’s happy to debate. We’ll iron out those details as we approach the fall,” Reynolds' campaign spokesman Pat Garrett said.

Reynolds has curtailed news conferences and public schedule events since the Iowa Legislature adjourned in May and she began campaigning.

The conservative Republican endorsed by Donald Trump has a multimillion-dollar fundraising advantage; Reynolds' campaign reported $5.2 million to spend in July and DeJear just over $418,500.

A Des Moines Register Iowa Poll published in July indicated a Reynolds lead of 17 percentage points with Reynolds at 48% support and DeJear at 31%.

Reynolds won her first election in 2018 by a narrow 2.8% margin over Democratic businessman Fred Hubbell. She is seeking a second full four-year term.

This is the second time DeJear, who was a campaign organizer for President Barack Obama, has run statewide. In 2018, she became the first Black candidate to win a major party nomination for a statewide office in Iowa when she became the Democratic nominee against Iowa Secretary of State Paul Pate. She was defeated in the general election.