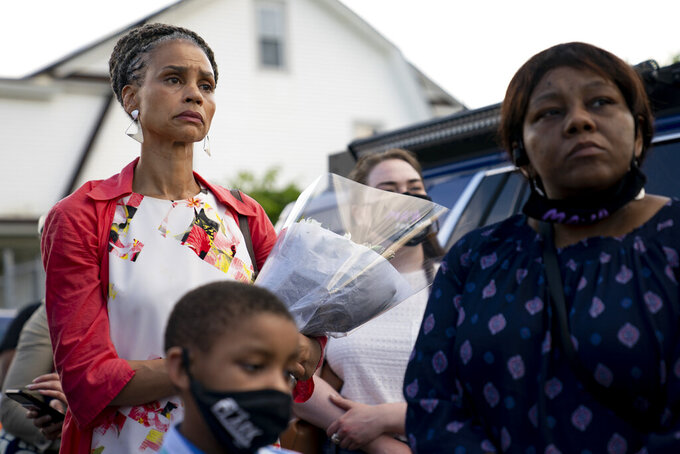 NEW YORK (AP) — A New York City man was charged with murder Wednesday in the shooting of a 10-year-old boy killed at a family barbecue by bullets that police say were spurred by a quarrel over a driveway.

Jovan Young, 29, was being held without bail after his arraignment in a case that stirred grief and outrage from the victim's family's Queens neighborhood to City Hall. The boy, Justin Wallace, would have been 11 on Tuesday.

“There isn’t a parent alive who doesn’t mourn this family’s loss," Queens District Attorney Melinda Katz said in a statement.

A message was left for Young's attorney. His mother, Inita Young, told the Daily News of New York that he wasn't the gunman or even present at the shooting Saturday and turned himself in Tuesday "because he has nothing to hide.”

A criminal court complaint cites witnesses and surveillance video as evidence against Young. "He is, in fact, the gunman,” Police Commissioner Dermot Shea told WPIX-TV.

Justin was a fifth-grader at Challenge Charter School. Katz said the child was at a family barbecue when bullets ripped through a screen door and into his abdomen, also hitting a relative multiple times. According to a criminal complaint, Young was firing at the relative, 29-year-old Kyle Forrester, who was taken to a hospitalized in critical condition but has survived.

Surveillance video released by police showed a man standing on the sidewalk and firing several shots.

Shea told WPIX that based on what police have learned so far, the shooting stemmed from a dispute over a shared driveway earlier in the day.

“This is not the first time there has been words over that driveway,” he shared, saying that after the disagreement, the gunman returned and fired into the home.

Mayor Bill de Blasio, who visited Justin's family on Sunday, has called the shooting “a profound injustice.” He praised the New York Police Department's work on the case.

“When someone does something wrong, at least we need to know and feel that there will be real consequences,” the mayor said Wednesday. He is a Democrat, as is Katz.

“I think all of New York City was disgusted by that incident,” Shea said.