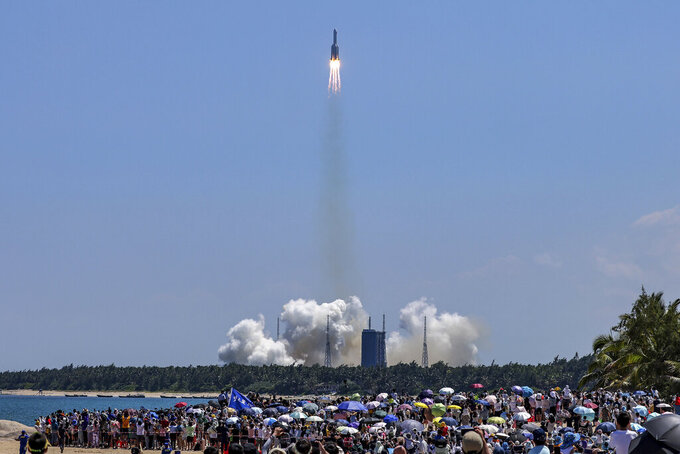 Zhang Liyun, ASSOCIATED PRESS
FILE - In this photo released by Xinhua News Agency, people gather at the beach side as they watch the Long March 5B Y3 carrier rocket, carrying Wentian lab module, lift off from the Wenchang Space Launch Center in Wenchang in southern China's Hainan Province Sunday, July 24, 2022. There was no reported damage in a western Philippine region, where debris from a rocket that boosted part of China’s new space station reportedly fell, a Filipino official said Monday, Aug. 1. (Zhang Liyun/Xinhua via AP, File)

MANILA, Philippines (AP) — There was no reported damage in a western Philippine region where debris from the final stage of a rocket that launched part of China’s new space station reportedly fell, a Filipino official said Monday.

Philippine Space Agency official Marc Talampas said authorities have been advised to be on the lookout for rocket debris, which may have fallen into the ocean off Palawan province.

“We are monitoring the situation and have also issued an advisory to the public to be vigilant, avoid contact with any suspected floating debris and to report to local authorities immediately,” Talampas told The Associated Press.

The China Manned Space Agency reported Sunday that most of the final stage of the Long March-5B rocket burned up after entering the atmosphere. It earlier said it would be allowed to fall unguided.

The Chinese agency announcement gave no details of whether the remaining debris fell on land or sea but said the “landing area” was at 119 degrees east longitude and 9.1 degrees north latitude. That is in waters southeast of Palawan’s capital city of Puerto Princesa.

The Philippine Space Agency did not receive any notification from its Chinese counterpart about the rocket debris, Talampas said when asked if the Philippines received prior information about potential risks.

In Beijing, Foreign Ministry spokesperson Zhao Lijian rejected criticism that China did not share specific information about the falling debris and said its space agency issued “relevant information” on its website early in the morning of July 31.

“The accusations by the relevant U.S. officials and so-called experts are neither professional nor consistent with the fact,” Zhao said in a daily briefing in response to a question.

“The Chinese competent authority has been closely monitoring the orbital parameters of rocket remnants and releasing relevant information to the international community in a transparent and timely manner,” he said.

Zhao said the surviving remnants have “not caused any harm to aviation activities or to the ground.”

China has faced criticism for allowing rocket stages to fall to Earth uncontrolled twice before. NASA accused Beijing last year of “failing to meet responsible standards regarding their space debris” after parts of a Chinese rocket landed in the Indian Ocean.

The country’s first space station, Tiangong-1, crashed into the Pacific Ocean in 2016 after Beijing confirmed it lost control. An 18-ton rocket fell uncontrolled in May 2020.

China also faced criticism after using a missile to destroy one of its defunct weather satellites in 2007, creating a field of debris that other governments said might jeopardize other satellites.

The July 24 launch of the Long March-5B, China’s most-powerful rocket, carried the Wentian laboratory into orbit. It was attached to the Tianhe main module, where three astronauts live.

The remains of a separate cargo spacecraft that serviced the station fell into a predetermined area of the South Pacific after most of it burned up on reentry, the Chinese government announced earlier.