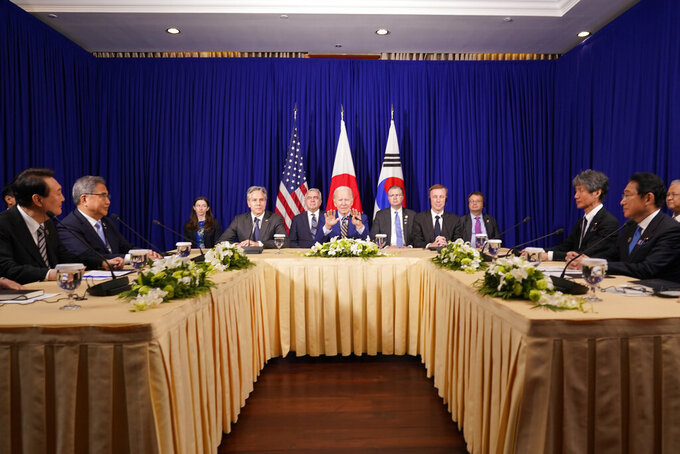 PHNOM PENH, Cambodia (AP) — President Joe Biden and the leaders of Japan and South Korea on Sunday vowed a unified, coordinated response to North Korea's threatening nuclear and ballistic missile programs, with Biden declaring that the three-way partnership is “even more important than it's ever been” when North Korea is stepping up its provocations.

Biden met separately with Japanese Prime Minister Fumio Kishida and South Korean President Yoon Suk Yeol before all three sat down together on the sidelines of the East Asia Summit in Cambodia.

The U.S. president began by offering condolences for a crowd surge during Halloween festivities in Seoul that killed more than 150 people, saying the U.S. had grieved with South Korea. The meeting was heavily focused on North Korean leader Kim Jong Un's recent escalations, although Biden said the three leaders would also discuss strengthening supply chains and preserving peace across the Taiwan strait, while building on the countries' support for Ukraine in the face of Russian aggression.

Biden had also planned to seek input from Kishida and Yoon on managing China’s assertive posture in the Pacific region on the eve of his face-to-face with President Xi Jinping.

“We face real challenges, but our countries are more aligned than ever, more prepared to take on those challenges than ever,” Biden said. “So I look forward to deepening the bonds of cooperation between our three countries.”

Both Yoon and Kishida discussed the ongoing displays of aggression by North Korea, which has fired dozens of missiles in recent weeks. The launches include an intercontinental ballistic missile 10 days ago that triggered evacuation alerts in northern Japan, as the allies warn of a looming risk of the isolated country conducting its seventh nuclear test in the coming weeks.

Referring to the crowd surge that occurred in the Itaewon neighborhood in Seoul, Yoon said, through an interpreter: “At a time when South Koreans are grieving in deep sorrow, North Korea pushed ahead with such provocations which lays bare the Kim Jong Un regime's true inclinations.”

U.S. National Security Adviser Jake Sullivan told reporters on Saturday that Biden would use the meetings to strengthen the three countries' joint response to the dangers posed by North Korea, officially known as the Democratic People's Republic of Korea.

“What we would really like to see is enhanced trilateral security cooperation where the three countries are all coming together,” he said. “That’s acutely true with respect to the DPRK because of the common threat and challenge we all face, but it’s also true, more broadly, about our capacity to work together to enhance overall peace and stability in the region.”

Tensions on the Korean Peninsula have skyrocketed in recent months as the North continues its weapons demonstrations and the U.S. and South Korea held stepped-up joint defense exercises. Earlier this month, the South Korean military said two B-1B bombers trained with four U.S. F-16 fighter jets and four South Korean F-35 jets during the last day of “Vigilant Storm” joint air force drills. It was the first time since December 2017 that the bombers were deployed to the Korean Peninsula. The exercise involved a total of roughly 240 warplanes, including advanced F-35 fighter jets from both countries.

North Korea responded with its own display of force, flying large numbers of warplanes inside its territory.

The Biden administration has said it has sent repeated requests to negotiate with North Korea without preconditions on constraining its nuclear and ballistic missile programs, but that Kim Jong Un's government has not responded.

Biden has said he plans to press Xi to use China's sway over North Korea to curtail its aggressive behavior, as part of what is expected to be a wide-ranging meeting between the leaders on the margins of the Group of 20 gathering in Bali, Indonesia.

China "has an interest in playing a constructive role in restraining North Korea’s worst tendencies,” Sullivan said Saturday. “Whether they choose to do so or not is, of course, up to them.”

Biden told reporters on Sunday that he’s “always had straightforward discussions” with Xi, and that has prevented either of them from “miscalculations” of their intentions. Their meeting comes weeks after Xi cemented his grip on China’s political system with the conclusion of the Community Party congress in Beijing that gave him a norm-breaking third term as leader.

“His circumstances changed, to state the obvious, at home,” Biden said of Xi. Biden maintained that his own have as well, saying that after Democrats retained control of the Senate in the midterm elections, “I know I’m coming in stronger."

Underscoring that point, several heads of state approached Biden in Cambodia to tell him they had followed the U.S. midterm campaigns closely, telling the president that the results were a testament to the strength of American democracy, Sullivan told reporters traveling on Air Force One to Indonesia on Sunday evening.

Monday's meeting will be the first in-person sit-down between the leaders since Biden was elected. U.S. officials have expressed frustration that lower-level Chinese officials have proven unable or unwilling to speak for Xi, and are hoping the face-to-face summit will enable progress on areas of mutual concern — and, even more critically, a shared understanding of each others' limitations.

“I know him well, he knows me,” Biden said. “We’ve just got to figure out where the red lines are and what are the most important things to each of us, going into the next two years.”

As president, Biden has repeatedly taken China to task for human rights abuses against the Uyghur people and other ethnic minorities, Beijing’s crackdowns on democracy activists in Hong Kong, coercive trade practices, military provocations against self-ruled Taiwan and differences over Russia’s prosecution of its war against Ukraine.

Xi’s government has criticized the Biden administration’s posture toward Taiwan — which Beijing looks eventually to unify with the communist mainland — as undermining China’s sovereignty and territorial integrity. The Chinese president also has suggested that Washington wants to stifle Beijing’s growing clout as it tries to overtake the U.S. as the world’s largest economy.

Biden also spoke briefly with Australian Prime Minister Anthony Albanese, who has sought out his own meeting with Xi this week in an effort to ease Chinese sanctions against his country.