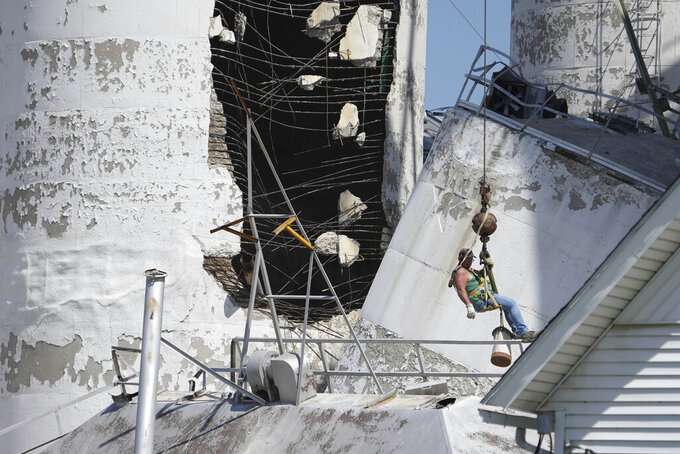 John Lovretta, ASSOCIATED PRESS
A worker is hoisted by a crane to survey the scene of a grain silo collapse before attaching cables to a partially collapsed overhead grain storage bin, Tuesday, June 21, 2022, at the Yarmouth Elevator in Yarmouth, Iowa. Crews continued to search Wednesday for a man missing beneath piles of grain and debris from a collapsed grain silo in southeastern Iowa. (John Lovretta /The Hawk Eye via AP)

YARMOUTH, Iowa (AP) — Crews recovered the body of a man who was buried under piles of grain and debris from a collapsed grain silo in southeastern Iowa on Wednesday.

The collapse happened just before 8 a.m. Tuesday at a grain elevator at Yarmouth, officials reported.

Des Moines County emergency management officials said the man's body was recovered about 1:15 p.m. Wednesday. The man's name has not been released.

Two men had just unloaded a semitrailer full of grain into a holding shed at the elevator when they heard a loud bang and began running from the facility as the silo partially collapsed, Mediapolis Fire Department Deputy Chief Jeff Kerr told the Hawk Eye.

"The one made it out, and he turned around and the other guy wasn’t with him,” Kerr said.

Nearly 60 emergency responders, contractors and towing crew members responded to the scene to remove the debris in an effort to reach the man.