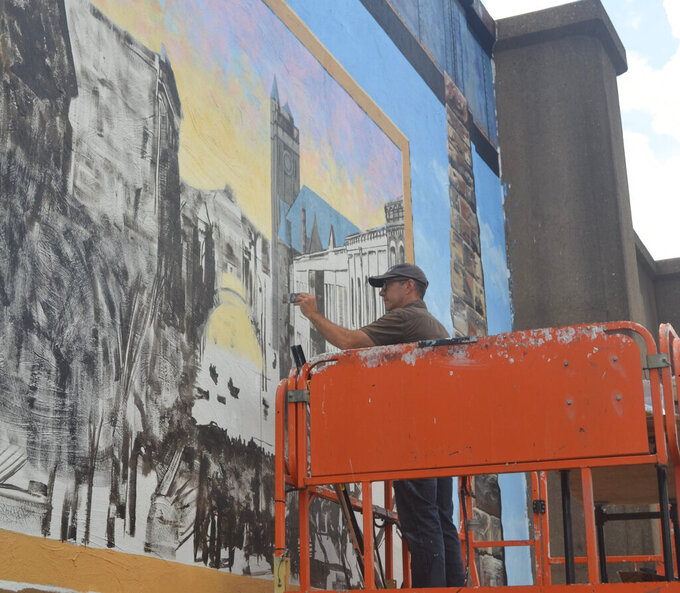 Brett Dunlap, ASSOCIATED PRESS
Artist Christopher Santer, who is originally from Parkersburg and now lives in St. Paul, Minn., works on a section of the floodwall mural on Tuesday, Aug. 2, 2022, just inside the gate to Point Park, in Parkersburg, W.Va. Santer has been working on the new section of the mural depicting historic scenes of Parkersburg framed by a representation of the railroad bridge that runs through downtown. (Brett Dunlap/News and Sentinel via AP) 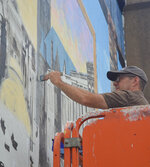 PARKERSBURG, W.Va. (AP) — The next phase of the floodwall mural in Parkersburg is underway.

Artist Christopher Santer, who is originally from Parkersburg and now lives in St. Paul, Minn., has been working for the last couple of weeks on the next part of the project which is underway on the wall just inside the gate to Point Park.

“This is Phase 2 of the project and it is intended to showcase the historical panels and how the overall look will be,” Santer said. “We chose right here at the entrance with its high visibility as a good starting point.”

The scenes depicted on this section of the wall include a scene of Market Street being flooded in the flood of 1913 and an aerial view of Blennerhassett Island.

“All along the one image I wanted to paint first was of Market Street during the flood,” Santer said. “This is the image I grew up seeing (referring to an old photograph taken from the train bridge in downtown which also showed many people in boats).

“This is the one I always wanted to do.”

With Blennerhassett Island, he was looking at getting the overall shape of the island right along with the hint of Parkersburg in the background where the Ohio River bends.

“We all know the shape of Blennerhassett and I thought that would be a beautiful contrast to the architecture (of the flooded street scene),” Santer said.

The panel fades out in an almost unfinished state that will be continued on next summer, he added.

Last year, Santer along with other local artists and students did a section on the wall which depicted colorful mountain scenery.

The plan, over the next few summers, is to work on sections of the wall and eventually connect to the mountain scene, Santer said, adding the overall plan calls for 20 local historical scenes which will go from the Parkersburg sign on the wall to the mountain scene using the look of the railroad bridge in downtown to provide a frame for other images specific to the history of Parkersburg.

“(Where he is starting on Phase 2) is where I really wanted here to set the look of how I envisioned the bridge and the piers and how the sky is painted,” Santer said. “Part of the goal is to basically make the wall disappear.”

Santer said he has always been captivated by the railroad bridge and he was really trying to capture the over 150 years of weathering on the sandstone and how it is potmarked, eroded and stained in recreating its detail on the wall.

“That has been really satisfying to really achieve that look of the stone,” Santer said. “(The bridge dates back to 1871) and that is one reason I ended up using it to organize the whole plan.

“If there is anything that has been a defining element of Parkersburg for so long it is that bridge. That bridge is so defining of Parkersburg and to really showcase it here really made sense. It was fun painting all of that rust and corrosion.”

He is planning to finish out his current work this week.

Santer said he has another artist lined up to do one of the future historical panels. He wants to open up other panels to other artists, but keep it in “an old postcard look.”

Future plans may involve scenes of old downtown Parkersburg, the historic river front when Parkersburg was a major stop for sternwheelers traveling from Pittsburgh to Cincinnati, the historic Wood County Courthouse and more. Ideas are still being considered and looked at.

If fundraising goes the way he wants, Santer expects to cover about twice as much space next summer. Currently, the project is being funded through private donations with the possibility of other money coming in at a later time. The city has provided support in getting the site ready for the current phase of work.

More information about the project is available online at parkersburgflood.org and on the Parkersburg Floodwall Mural Project Facebook page.

“There seems to be a lot of support from the public and the response has been overwhelmingly positive and exciting both on social media and the people stopping by,” Santer said. “It has been a wonderful two summers of doing this and hopefully a few more summers.”