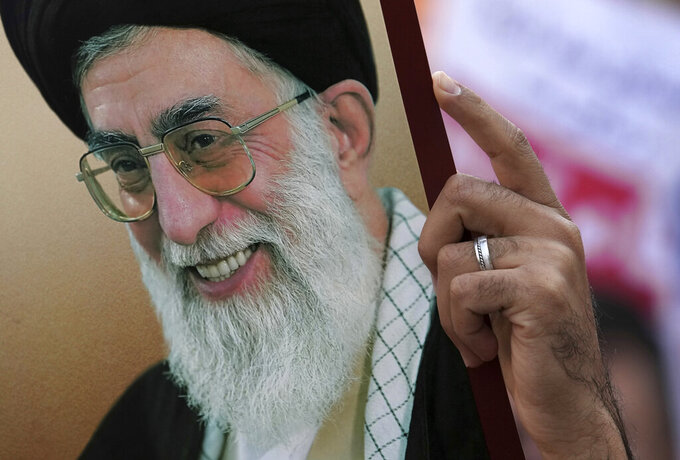 Vahid Salemi, ASSOCIATED PRESS
A man holds up a poster of Iranian Supreme Leader Ayatollah Ali Khamenei during a demonstration in front of the former U.S. Embassy in Tehran, Iran, Friday, Nov. 4, 2022. Iran on Friday marked the 1979 takeover of the U.S. Embassy in Tehran as its theocracy faces nationwide protests after the death of a 22-year-old woman earlier arrested by the country's morality police. (AP Photo/Vahid Salemi)

DUBAI, United Arab Emirates (AP) — Iran on Friday marked the 1979 takeover of the U.S. Embassy in Tehran as its theocracy faces nationwide protests after the September death of a 22-year-old woman who was arrested by the country's morality police. Meanwhile, activists in southeast Iran claimed security forces killed at least 16 people in protests there.

Iranian state-run television aired live feeds of various commemorations around the country, with some in Tehran waving placards of the triangle-shaped Iranian drones Russia now uses to strike targets in its war on Ukraine. But while crowds in Tehran looked large with chador-wearing women waving the Islamic Republic's flag, other commemorations in the country appeared smaller, with only a few dozen people taking part.

"Anyone taking the smallest step in the direction of breaching security and riots, must know that they are stepping in the direction of enemies of the Islamic Revolution," he said. “Americans think they can execute the plan they carried out in some countries like Syria and Libya here. What a false dream!”

Those at the commemoration also waved effigies of French President Emmanuel Macron and Saudi Crown Prince Mohammed bin Salman. Signs and chants from the crowd called out: “Death to America! Death to Israel!”

The demonstrations that have convulsed Iran for seven weeks after the death of Mahsa Amini mark one of the biggest challenges to the country’s clerical rulers since they seized power in the 1979 Islamic Revolution. At least 314 protesters have been killed and 14,170 arrested since the unrest began, according to Human Rights Activists in Iran, a group that's been monitoring the crackdown on demonstrators.

Iran's government has not offered an overall death toll, with one state newspaper even making the counterfactual claim that no one had been killed by security forces over the 49 days of protests.

Later on Friday, protests began in Iran's southeastern Sistan and Baluchestan province, which has seen weeks of unrest. Online videos purported to show people marching in the streets and some throwing stones, with the crackle of gunfire in the background and clouds of tear gas rising. Some protesters appeared bloodied, while later footage purportedly showed dead bodies at morgues.

Iran’s state-run IRNA news agency later reported that protesters set fire to a police stand in Khash, a city in Sistan and Baluchestan, and attacked the local governor’s office.

On Thursday, a Shiite cleric reportedly was shot and killed in Sistan and Baluchestan, a long restive province that's predominantly Sunni.

Hard-liners within Iran long have bussed government workers and others into such Nov. 4 demonstrations, which have a carnival-like feel for the students and others taking part on Taleqani Street in downtown Tehran.

This year, however, it remained clear Iran's theocracy hopes to energize its hard-line base. Some signs read “We Are Obedient To The Leader,” referring to 83-year-old Supreme Leader Ayatollah Ali Khamenei, who has final say over all matters of state in the country. The weekslong demonstrations have included cries calling for Khamenei's death and the overthrow of the government.

The annual commemoration marks when student demonstrators climbed over the fence at the embassy on Nov. 4, 1979, angered by then-President Jimmy Carter allowing the fatally ill Shah Mohammad Reza Pahlavi to receive cancer treatment in the United States.

The students soon took over the entire, leafy compound. A few staffers fled and hid in the home of the Canadian ambassador to Iran before escaping the country with the help of the CIA, a story dramatized in the 2012 film “Argo.”

The 444-day crisis transfixed America, as nightly images of blindfolded hostages played on television sets across the nation. Iran finally let all the captives go the day Carter left office on Ronald Reagan’s inauguration day in 1981.

Marking the anniversary, State Department spokesperson Ned Price said that officials “are grateful for the selfless sacrifice of our diplomats who served in Tehran” and called for the release of Americans held by Iran.

"The Iranian regime has a long history of unjustly imprisoning foreign nationals for use as political leverage," Price said.

That enmity between Iran and the U.S. has ebbed and surged over the decades since. The U.S. and world powers reached a nuclear deal with Iran in 2015 that drastically curtailed its program in exchange for the lifting of international sanctions. However, then-President Donald Trump unilaterally withdrew from the deal in 2018, sparking years of tensions since.

Late Thursday in California at a rally before the U.S. midterm elections, President Joe Biden also stopped his speech to address a crowd that held up cellphones displaying the message “FREE IRAN.”

“Maybe he said this because of a lack of concentration. ... He said we aim to liberate Iran," Raisi said. "Mr. President! Iran was liberated 43 years ago, and it’s determined not to become your captive again. We will never become a milking cow.”

National Security Council spokesman John Kirby on Friday described Biden's comments as expressing “solidarity with the protesters, as he’s been doing from the very outset.”

“It’s going to be up to the people of Iran to determine their future. And that hasn’t changed,” Kirby said.

Biden had said he was willing to have the U.S. rejoin the nuclear deal, but talks have broken down. Since the protests began in mid-September, the American position appears to have hardened with officials saying restoring the deal isn't a priority amid the demonstrations.

On Friday, some protesters waved giant placards of atoms as a reminder that Iran now enriches uranium closer than ever to weapons-grade levels. Nonproliferation experts warn Iran now has enough enriched uranium to make at least one nuclear weapon if it chose, though Tehran insists its program is peaceful.