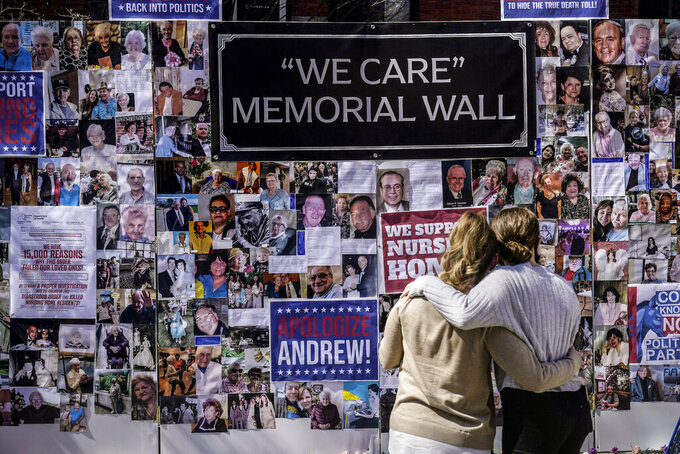 The report also found that Cuomo’s staff “substantially revised” a state health department report on COVID-19 deaths in nursing homes to exclude statistics that might have dimmed his reputation as a pandemic leader.

The findings, authored by a law firm hired by the Assembly's Judiciary Committee, were widely expected, and the sections on sexual harassment largely echo allegations previously made in a report last summer by the state's attorney general.

But it offered some new details, particularly around the $5.2 million private deal Cuomo struck to write a book, “American Crisis: Leadership Lessons on the Pandemic.”

Cuomo had promised state ethics officials that no state resources would be used on the book, but the Assembly's investigators at the law firm Davis Polk & Wardwell said they found evidence the governor had his staff spend copious amounts of time on the project.

“One senior state official explained that book-related assignments were given by superiors and expected to be completed, and the work was not voluntary,” the report said. "Another senior state official complained in a text message to a colleague that work on the book was compromising the official’s ability to work on COVID-related matters."

Junior and senior staff members told investigators they were asked to perform book tasks during their work day, including transcribing dictations, printing and delivering documents, and attending meetings with agents and publishers.

One senior state official sent and received 1,000 emails about the book, the report said. The report didn't name the official, but included details identifying her as his former top aide, Melissa DeRosa.

Responding to the report Monday, Cuomo's spokesperson, Richard Azzopardi, said senior staff who helped with the book did so on their personal time. He denied that junior staff was involved, as the report claims.

On the sexual harassment allegations, Azzopardi said the Assembly had relied too much on information gathered during a “politically biased” investigation overseen by the attorney general, Letitia James, who is now running for governor.

“When all the facts are fairly weighed,” Azzopardi said, none of the harassment allegations will stand up.

Cuomo, a Democrat, resigned in August to avoid a likely impeachment trial.

“The former governor’s conduct — as shown in this report — is extremely disturbing and is indicative of someone who is not fit for office,” Judiciary Committee Chairman Chuck Lavine, a Democrat, said.

Cuomo has denied sexually harassing anyone or touching any women inappropriately. For weeks, he has attacked the Assembly's investigation as biased and set on smearing him.

The former governor faces a separate criminal charge alleging that he groped the breast of a former assistant, Brittany Commisso, after summoning her to the executive mansion on Dec. 7, 2020.

The Assembly report said it had reviewed travel, phone and text messages that back up Commisso's account of her whereabouts on the day she says the attack happened.

“We conclude that there is overwhelming evidence that the former Governor engaged in sexual harassment,” the report reads.

The investigators also examined allegations that Cuomo's office had the state Department of Health delete a reference to 10,000 COVID-19 deaths among nursing home residents in a July 2020 state report.

The report instead used a lower figure of 6,500 deaths that excluded fatalities among patients who fell ill at nursing homes but died after being transferred to hospitals and elsewhere.

“Witnesses have stated that the same senior executive chamber official who served as the key point person for the book made the decision that only in facility deaths would be included in the DOH report,” reads the report, referring to DeRosa.

Some witnesses said using the higher number would have distracted from the overall message of the health department report, which was intended to defend Cuomo against charges that the state had worsened the death toll by telling nursing homes they couldn’t refuse to admit recovering COVID-19 patients discharged from hospitals.

The state contended infected staff and visitors were the key driver of COVID-19 outbreaks at nursing homes. The Assembly's investigators said they found no evidence contradicting that finding.

Cuomo often released statements pledging cooperation with the Assembly investigation, but investigators said he produced only limited documents over the course of almost six months.

“At no time has the former governor meaningfully complied with the committee’s requests or cooperated with its investigation,” the report reads.