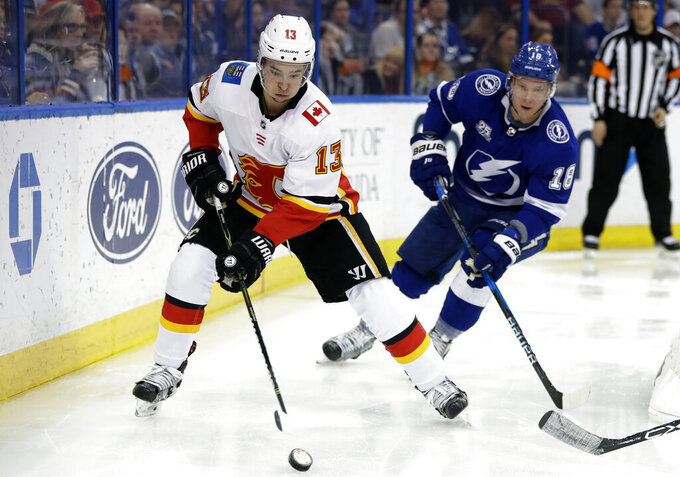 While Evgeni Malkin is returning to Pittsburgh, Johnny Hockey is testing the free agent market.

Join the club. It’s a good one.

On the eve of free agency, Malkin re-signed with the Penguins on a $24.4 million, four-year contract, and MVP candidate Johnny Gaudreau informed the Calgary Flames he's leaving in free agency to enter the fray in an NHL free agent class that features the most high-end talent available in several years.

“It is my strong belief that this was a family decision, and I respect that fully,” disappointed Flames general manager Brad Treliving said Tuesday night. “John has every right, and we have nothing but respect for John the player and John the person.”

Gaudreau, Colorado Stanley Cup champions Nazem Kadri and Darcy Kuemper, and Dallas defenseman John Klingberg headline one of the deepest groups of free agents in recent history. Even though the salary cap is only going up $1 million per team, record revenues have made for the first increase since 2019, setting the stage for significant money to flow when the market opens Wednesday.

Probably no one more than Gaudreau, who set career highs with 40 goals, 75 assists and 115 points in leading the Flames to the Pacific Division title. His next deal will almost certainly shatter the richest contract signed last year: $63 million to Dougie Hamilton from New Jersey.

Gaudreau, a South Jersey native who grew up rooting for the Flyers, has unsurprisingly been linked to Philadelphia and also the New York Islanders, though Calgary put on a full-court press to keep the dynamic winger, who turns 29 in August.

"I can assure our fans that we have done everything possible to keep John in Calgary," Treliving said, adding he doesn't anticipate circling back with Gaudreau. “I firmly believe there’s nothing more we could have done.”

The Penguins worked late Tuesday night to bring back Malkin on a deal that pays him $6.1 million a year, just like defenseman Kris Letang.

“Evgeni is a generational talent who will be remembered as one of the greatest players in NHL history,” GM Ron Hextall said. “His hockey resume and individual accomplishments speak volumes about him as a player, and we are thrilled to watch him continue his remarkable legacy in Pittsburgh.

Teams looking for a strong option down the middle have Kadri, who like Gaudreau had a career year and extended that production deep into the playoffs. Kadri, who will be 32 by opening night, was one of the Avalanche’s best players on their Cup run with 15 points in 16 games sandwiched around a broken right thumb he played through in the final.

“It’s going to be interesting,” Waddell said. “It looks like there’s an abundance of forwards and not as many defensemen.”

The best in that shallow pool is Klingberg, highly coveted as a right-shot defenseman who can run the power play. Think Hamilton money for the soon-to-be 30-year-old Swede, who put up 47 points last season.

Waddell joked he and the Hurricanes aren’t looking for a goaltender for the first time in many years, but there’s no shortage of teams that are. Kuemper, who backstopped the Avalanche to the Cup, is available after they acquired Alexandar Georgiev from the Rangers, and so is Jack Campbell with the Toronto Maple Leafs moving on to Matt Murray, who they got from Ottawa.

After inconsistency in net cost them in the playoffs, the Edmonton Oilers are expected to be big players in the goalie market. So will the Washington Capitals after GM Brian MacLellan “jumped into the fire” by trading Vitek Vanecek to the Devils and doubled down on remaking his goaltending by not tendering a qualifying offer to Ilya Samsonov.

Whether it’s by trade or free agency, the Capitals now need two goalies and know the price considering the high demand and low supply.

“Given the environment, I think it will be high,” MacLellan said.

The precedent has been set high for a lot of free agents after Colorado re-signed Valeri Nichushkin to a $49 million, eight-year deal Monday. Nichushkin got that after nine goals and six assists in the playoffs, so his $6.125 million annual cap hit could be the floor for Tampa Bay postseason star Ondrej Palat, unless he takes a hometown discount to try to help the Lightning win the Cup for a third time since their run of success began in 2020.

With or without Palat and stable defenseman Jan Rutta, the Lightning could again shop in the bargain aisle as they did last year by adding veterans Corey Perry, Pierre-Edouard Bellemare and Zach Bogosian, who were key pieces of a third consecutive run to the final.

“You start with, what holes do I need to fill and who are the best options to fill those holes, considering the cap space I have and the cap space I’m going to need to sign those players,” Lightning GM Julien BriseBois said.

Filling out the roster with depth players could take some time, not just for Tampa Bay but around the league. Many executives still expect the usual free agent frenzy beginning at noon EDT Wednesday, though that may not be the only time for the vast majority of signings like most years.

“There’s always going to be the rush of certain players are going to get signed, but because of the tight cap situation, are there going to be other situations that take place after that time frame?” Stars GM Jim Nill said. “This might be a year where it drags on a little bit longer.”