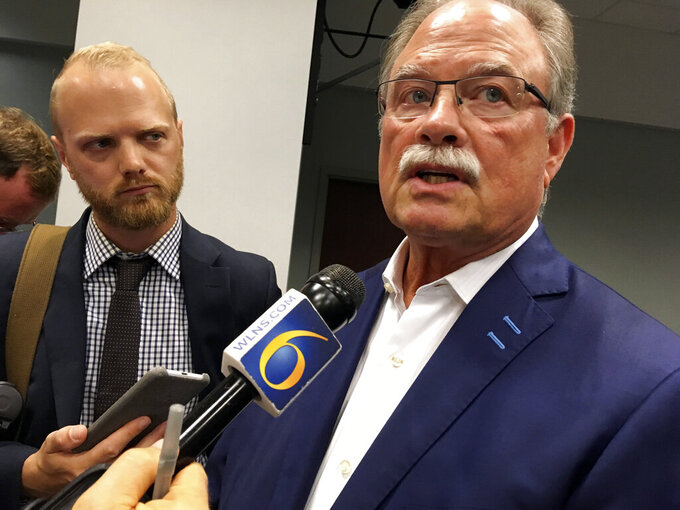 David Eggert, ASSOCIATED PRESS
FILE - In this Aug. 30, 2018, file photo, Michigan Chamber of Commerce's Rich Studley speaks to reporters in Lansing, Mich. Michigan business groups on Monday, OCT. 18, 2021, urged President Joe Biden to reconsider a plan to require most workers to get vaccinated or regularly tested for COVID-19 but said, if it is enacted, Gov. Gretchen Whitmer should ensure related state rules are no stricter. Studley, president and CEO of the Michigan Chamber of Commerce, said the regulations may be announced later this week or next week. (AP Photo/David Eggert File)

LANSING, Mich. (AP) — Michigan business groups on Monday urged President Joe Biden to reconsider a plan to require most workers to get vaccinated or regularly tested for COVID-19 but said, if it is enacted, Gov. Gretchen Whitmer should ensure related state rules are no stricter.

The Michigan Chamber of Commerce and six local chambers raised a host of concerns and questions over the pending federal mandate, which will apply to employers with at least 100 employees. They cited the cost, the logistical challenge of checking workers' vaccination status and test results at a time human resources or other staffing is limited, and said the 100-employee threshold is arbitrary.

The organizations also asked how employees will be counted, whether the unvaccinated will be able to work while awaiting weekly test results and how long companies will have to comply with the Occupational Safety and Health Administration's rule.

Rich Studley, president and CEO of the Michigan Chamber of Commerce, said the regulations may be announced later this week or next week. Michigan is among 27 states that operate and enforce workplace safety rules instead of the U.S. government. OSHA-approved state plans must be at least as effective as the federal program.

“Sometimes there's been a tendency in the past that state officials look at a federal standard as a jumping off point to do more, to do differently, to enact substantially more stringent standards. That would be our concern,” Studley said.

Whitmer's office referred questions to the Michigan Occupational Safety and Health Administration, since the federal rule had not been released. A message seeking comment was left with MIOSHA.

The Democratic governor, whose administration lifted pandemic restrictions months ago, has said she does not plan to issue broad vaccine or mask mandates.

Biden, who resisted vaccine requirements previously, has shifted to favoring them due to a stubborn slice of the public that has refused to be inoculated and has jeopardized the lives of others and the country's economic recovery. He has said such mandates are lifesaving and “game-changing.”

“The federal vaccine mandate is well-intentioned, but unfortunately it creates an entirely new level of private-sector responsibilities our member businesses, by and large, have neither the experience nor the resources to carry out at this time,” said Nikki Devitt, president of the Petoskey Regional Chamber of Commerce.

Andy Johnston, vice president of government affairs for the Grand Rapids Area Chamber of Commerce, said businesses “are doing a ton already to encourage their employees to get vaccinated in a variety of different, creative ways. That's the way it should be done. If this does goes forward, if the president doesn't reconsider, we do ask that MIOSHA give a lot of leeway and time for this to be implemented correctly and with commonsense enforcement.”

Nearly 62% of people ages 12 and older are fully vaccinated in Michigan, 20th-highest among states but lower than the national rate of roughly 67%.

Michigan is among seven states where coronavirus case rates increased over the past two weeks, according to data compiled by Johns Hopkins University. It had the 10th-highest rate in the U.S. The seven-day average of 4,384 new infections was about 56% of the peak in April, when cases began to plummet before rising again over the summer.