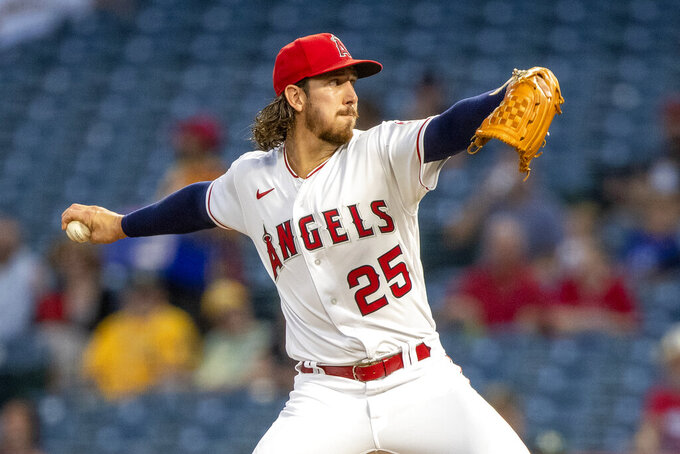 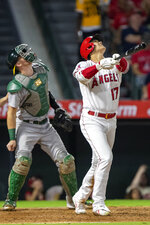 Taylor Ward also homered, while Lorenzen (8-6) gave up an unearned run to lower his ERA to 0.45 against the A’s this season. The Angels extended their winning streak over Oakland to five games. Los Angeles won for the fourth time in its last five games overall.

Rookie Conner Capel drove in the run for the A’s, who lost for the fifth time in their last six games and are one defeat from reaching 100 loses for the first time since 1979.

Tony Kemp led off the game with an infield single and went to second on a throwing error by Angels third baseman Matt Duffy. Seth Brown walked and stole second base with two outs before Capel singled to left field.

That ended Lorenzen’s scoreless streak against Oakland at 12 innings.

“I think Lorenzen had pretty good life on his fastball,” A's manager Mark Kotsay said. “We came out aggressive and got a run in the first. I think overall, you tip your cap to the performance he had. The changeup looked really, really good tonight.”

The Angels had just one hit against A’s starter Adrian Martinez in three innings before breaking through in the fourth. Trout led off with a home run to center, his 10th of the month.

Shohei Ohtani followed with a single, while Ward reached base on a fielder’s choice. After a wild pitch by Martinez put both runners into scoring position, Matt Thaiss hit an RBI single for a 2-1 lead. Duffy made it 3-1 on a ground ball that scored Ward.

“I thought Martinez threw the ball well with a lot of movement on his pitches and we got to him the second time through the order and hit some balls hard,” Angels interim manager Phil Nevin said. “Those guys (Trout and Ohtani) are guys we lean on a lot and to get the three (runs) in that spot was big.”

In the eighth inning, Ward added his 22nd home run of the season on a blast to center field.

Lorenzen gave up three hits in five innings with three walks and eight strikeouts. Jimmy Herget pitched the ninth inning for his eighth save as the Angels won for the 11th time in 15 games between the teams.

Martinez (4-6) gave up three runs on five hits over 4 2/3 innings with no walks and four strikeouts. The right-hander was making his 11th career start.

“Adrian came back against Trout and got him in that third at-bat, which shows that maturity, shows that progress," Kotsay said about Martinez, who struck out the Angels' three-time MVP as his last batter of the game in the fifth inning.

Angels catcher Logan O’Hoppe singled to center field in the third inning in his first major league at-bat after being called up from Double-A Rocket City. The club’s top prospect, according to multiple outlets, was acquired from the Philadelphia Phillies at the trade deadline for outfielder Brandon Marsh.

“Your first major league at-bat, believe me your mind is racing and you're not all there,” Nevin said. “He was able to gather it together and line a pitch up the middle. It was neat to see and he did a phenomenal job behind the plate.”

The Angels reinstated Anthony Rendon from the injured list and the third baseman will immediately begin serving a five-game suspension, with the goal of playing in the final three games of the regular season next week at Oakland.

Rendon already was on the injured list because of a wrist injury when he took an open-handed swing at the Seattle Mariners’ Jesse Winker during an on-field brawl June 26. That incident earned his suspension.

A’s: LHP Sam Moll, who last appeared in a game Sept. 15, has officially been ruled out for the remainder of the season because of a strained left shoulder.

Angels: OF Mickey Moniak left in the sixth inning after he swung at a pitch that hit him on the knuckle of one of his hands. X-rays were negative. … Rendon and INF David Fletcher faced live pitching, with Fletcher close to a return from a hand injury that has limited him to one at-bat since Sept. 15.

Angels: RHP Shohei Ohtani (14-8, 2.47) needs nine innings pitched to become the first player to qualify for league-leading statistics as a hitter and pitcher.