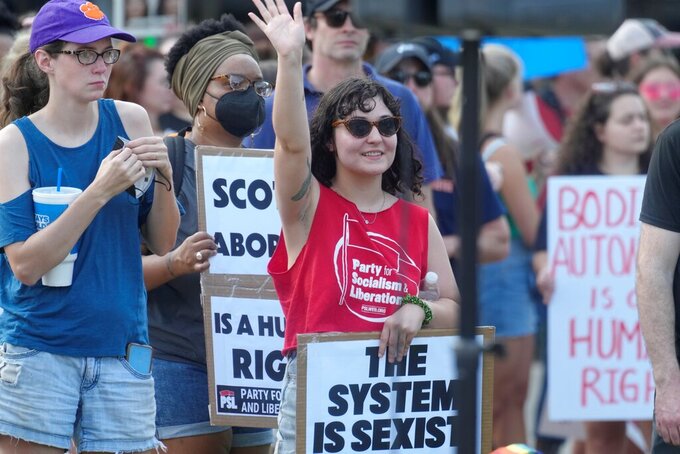 A law restricting abortions in South Carolina after six weeks of pregnancy can take effect immediately in the state, a federal court ruled Monday.

The U.S. District Court in South Carolina lifted its prior hold on the enforcement of a state law passed last year that bans most abortions if an ultrasound detects a so-called fetal heartbeat, usually around six weeks into a pregnancy.

The decision was part of a wave of court action across the U.S. after Friday's ruling by the U.S. Supreme Court that overturned Roe v. Wade.

The federal court ruling allows the implementation of the Fetal Heartbeat and Protection from Abortion Act, which requires doctors to use an ultrasound to try to detect a so-called fetal heartbeat if they think a pregnant woman is at least eight weeks along. In that event, an abortion can only be performed if the woman’s life is in danger, or if the pregnancy is the result of rape or incest.

However, medical experts say the cardiac activity is not an actual heartbeat but rather an initial flutter of electric activity within cells in an embryo. They say the heart doesn’t begin to form until the fetus is at least nine weeks old.

Nonetheless, Republican Gov. Henry McMaster signed the law in 2021. Opponents sued hours later, preventing it from going into effect, but dropped the suit after Roe v. Wade was overturned.

The new law replaces one that allowed abortions up to the 20th week of pregnancy.

“Our state is now carrying out a government’s most sacred and fundamental duty, protecting life,” state Attorney General Alan Wilson said in a statement.

Planned Parenthood said it will continue performing abortions at its South Carolina clinics within the parameters of the new law.

Republican legislative leaders have raised the possibility of calling a special session to tighten the abortion law even further. But it wasn’t clear if they had the votes for a total ban like one supported by McMaster.

Also Monday, the Democratic candidate for governor in South Carolina said he would oppose a blanket ban on abortion if elected.

“If a bill came across my desk to ban all abortions with no exceptions, I would veto it pretty damn fast,” Joe Cunningham said in his first news conference since winning the nomination earlier this month.

Cunningham’s veto threat has weight with Republicans considering they don't have enough votes in either the state House or Senate to easily override a veto. And a handful of Republican lawmakers have been hesitant to support outlawing abortion, especially without exceptions for rape or incest.

McMaster supports a full ban on abortion, but whether he supports any exceptions isn’t as clear. The governor told reporters in May just after a draft version of the Supreme Court ruling was leaked he supported “no exceptions,. But he's also said he will work with lawmakers without committing to any version of a ban, whether it charges doctors who perform illegal abortions with murder or allows victims of rape and incest to end pregnancies.

“The more we can protect life in South Carolina, the better it will be,” McMaster said last month. McMaster is running for reelection and will face Cunningham in November.

Cunningham also asked the South Carolina General Assembly to not call a special session, saying voters will let their representatives know exactly how they feel about the court’s decision in November’s elections.