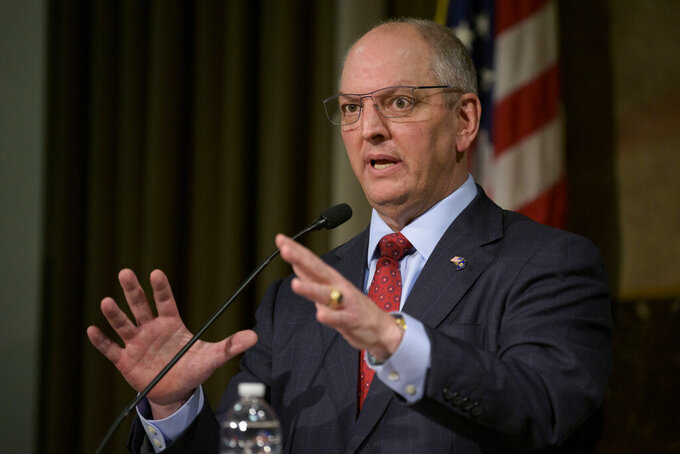 In total, the Democrat has vetoed 23 bills passed during the 2022 regular legislative session, which adjourned on June 6. All but one of the bills thrown out by the governor were authored by Republican lawmakers.

Among Monday’s list of rejected legislation were several measures that would toughen criminal sentences and punishment as well as create new criminal charges, including establishing the crime of resisting a police officer with force or violence.

Edwards described the proposed new crime as “antithetical,” saying it would backtrack on 2017 reforms that pushed to change Louisiana’s status as the state with the highest incarceration rate in the country.

A bill that would require anyone over age 17 who was convicted of the production or manufacturing methamphetamine to register with local law enforcement was also shelved.

In his veto reasoning sent to lawmakers, Edwards wrote that instead of placing a “scarlet letter” on someone for one drug offense, the focus should be on treatment.

The governor also vetoed a bill that would decrease the rate at which a sentence could be shortened for anyone convicted in the death of a peace officer or first responder killed in the line of duty to one day for every 30 days in custody.

Criminal punishment, sentencing and charges were not the only bills quashed. Edwards vetoed a bill that would ban government entities and public schools from requiring proof of COVID-19 vaccine to enter buildings or for workers.

“The bill is unnecessary and perpetuates the false narrative that the residents of Louisiana face vaccine mandates to access government services or attend schools. This is not the case,” Edwards wrote. “The bill also seeks to undermine public confidence in vaccines, which are safe, effective, and essential to public health.”

Additionally, two education-related bills that would allow students to leave public schools and use annual state aid to attend private schools or to pursue other education options also received the governor’s seal of disapproval.

One of the proposed measures — which passed in the Senate 24-7 and was endorsed in the House 97-0 — would aid second and third grade students reading below grade level. The other bill would also create a program to “provide state funding for the education of students with exceptionalities not enrolled in public school.”

Edwards has long been skeptical of the bills, specifically saying that the legislation does not set up accounts for parents to save money for education and that the change would potentially divert money from the Minimum Foundation Program — Louisiana’s $4 billion funding source for public schools.

“As passed, this bill would allow the children of wealthy parents to attend private schools subsidized by taxpayer dollars,” Edwards wrote in his reasoning.

But proponents say the legislation would give parents new options to help kids, with disabilities or struggling to read, have a tailored education.

“For too long, our state has ranked close to last when it comes to educational outcomes,” Daniel Erspamer, CEO for The Pelican Institute for Public Policy, said in a press release after the governor’s veto. “Bold reforms like education savings accounts would help get our kids into schools that best fit their needs so they can have bright futures.”

Lawmakers could return to the Capitol to override the governor’s vetoes if they choose.

Under Louisiana’s constitution, a veto session is automatically scheduled when a governor vetoes legislation. However, a majority vote of either the House or Senate can scrap the gathering — a decision that often is an afterthought.

Last year, lawmakers held their first-ever veto session since the current Louisiana Constitution was adopted in 1974.