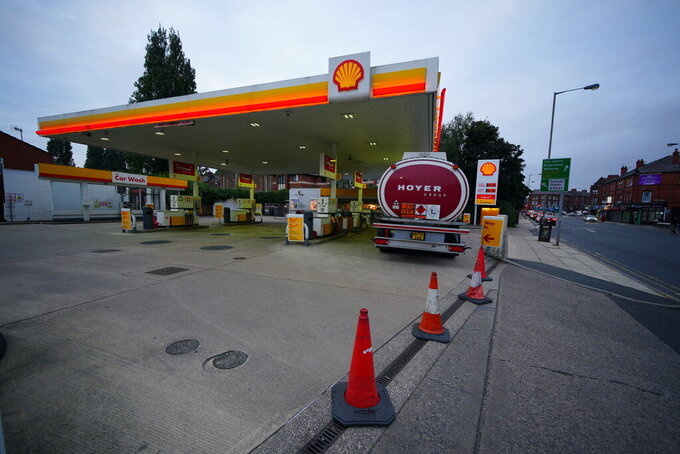 Peter Byrne, ASSOCIATED PRESS
A petrol tanker delivers fuel to a petrol station in Liverpool, England, Thursday Sept. 23, 2021, which was closed due to having no fuel. The British government is trying to ease concerns of a fuel crisis after oil giants BP and ExxonMobil-owned Esso warned they had to ration supplies and close some gas stations as a result of a truck driver shortage. (Peter Byrne/PA via AP)

LONDON (AP) — The British government sought to ease concerns Thursday of a fuel crisis after oil giants BP and ExxonMobil-owned Esso warned they had to ration supplies and close some gas stations as a result of a truck driver shortage.

BP said it was reducing gasoline and diesel deliveries and that a "handful” of its stations were closed. ExxonMobil said the labor problem affected a “small number” of the businesses it operates with supermarket chain Tesco.

“The driver shortage is a very serious issue that needs urgent government and industry action to resolve; however, we urge people not to panic buy," trade body Logistics U.K. said.

“The logistics industry is resilient and has proven capable of supporting shops, families and businesses during COVID-19, border closures and the first stages of Brexit, and will continue to serve the needs of the nation," the association said.

Industry and government officials worry the news will cause a rush of people speeding to fill up their vehicles, leading to lines and further supply bottlenecks. In September 2000, Britain came to a near-standstill for several days when truckers, aghast at the rising cost of fuel at the time, started blockading refineries, spurring motorists to head to the pump.

Prime Minister Boris Johnson’s office urged people not to panic buy fuel in response to the latest news and said the government was making changes to deal with the driver shortages.

“I think the first thing to say is that there is no shortage of fuel in the U.K., and people should continue to buy fuel as normal,” Jamie Davies, a spokesman for the prime minister, said.

“We obviously recognize the challenges faced by the industry, and we’re taking steps to support them,” Davies said, pointing to a new government initiative to accelerate the process by which drivers can get their trucking licenses.

Fuel distribution is not the first industry to face issues from the shortage of drivers. A number of factors have contributed to the shortage, including an exodus of drivers from European Union countries as a result of Britain’s departure from the EU and the coronavirus pandemic.

Among the many companies struggling to maintain stock and service levels are pub company JD Wetherspoon, whose founder was an ardent supporter of Brexit, and fast-food chains KFC, McDonald’s and Nando’s.

Supermarkets have also reported a shortage of some goods, while vaccine company Seqirus said drivers shortages had delayed its deliveries of flu vaccines.