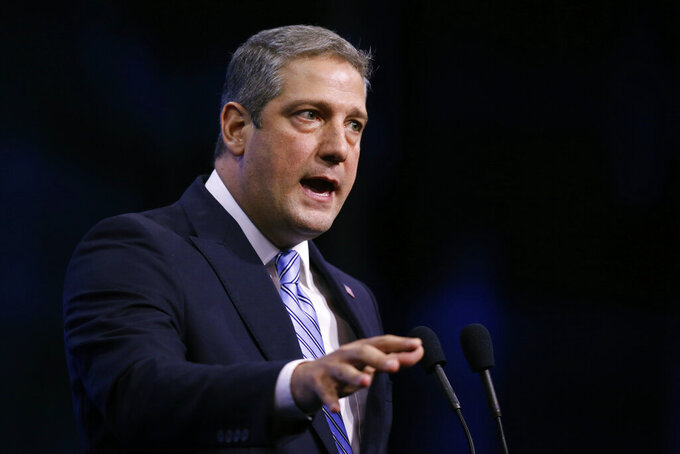 Robert F. Bukaty, ASSOCIATED PRESS
FILE - In this Sept. 7, 2019, file photo, Rep. Tim Ryan, D-Ohio, speaks in Manchester, N.H. In a statement, Ryan said he tested positive Monday, Sept. 20, 2021 for COVID-19 despite being vaccinated against the virus. He was experiencing mild symptoms from his breakthrough case and will continue to quarantine from his northeast Ohio home. (AP Photo/Robert F. Bukaty, File)

COLUMBUS, Ohio (AP) — U.S. Rep. Tim Ryan of Ohio tested positive Monday for COVID-19 despite being vaccinated against the virus.

In a statement, Ryan said he was experiencing mild symptoms from his breakthrough case and will continue to quarantine from his northeast Ohio home.

“While I'm currently experiencing mild symptoms, I'm grateful to have the protection of a safe and effective vaccine and I know without it, this illness could be much, much worse,” the Democratic congressman said. “I urge all Ohioans to help us crush this pandemic by wearing a mask and getting vaccinated so that we can get back to normal.”

The 47-year-old lawmaker joins the list of more than 80 members of Congress who have contracted the virus since it began to spread in the U.S. in March 2020, according to an Associated Press analysis.

Ryan said he will continue to fulfill his congressional duties virtually until he can return to Washington.

The 10-term representative from the state's blue-collar Mahoning Valley officially launched his Senate bid in April, becoming the Democratic frontrunner as the party goes after Republican Rob Portman’s seat.

Ryan entered the crowded race in hopes to rein in control for his party in Ohio. Progressive Morgan Harper, a Stanford-educated attorney, also is running for the Senate seat.