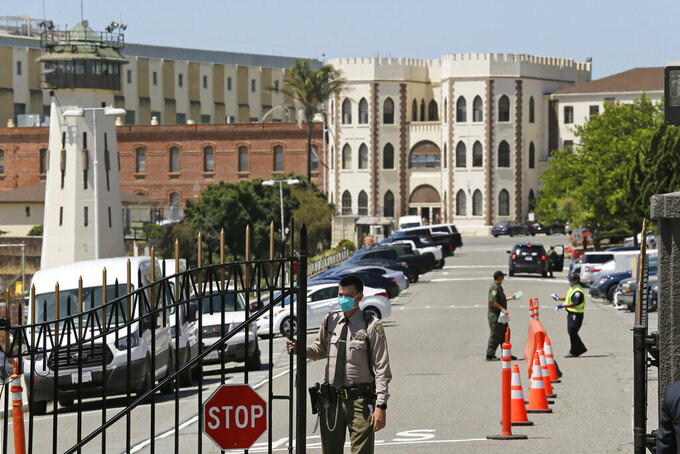 Eric Risberg, ASSOCIATED PRESS
FILE - In this July 9, 2020, file photo, a correctional officer closes the main gate at San Quentin State Prison in San Quentin, Calif. A federal judge on Monday, Sept. 27, 2021, ordered that all employees entering California prisons be vaccinated or have a religious or medical exemption to vaccination as he tries to head off another outbreak like the one that killed 28 inmates and a correctional officer at San Quentin State Prison last summer. (AP Photo/Eric Risberg, File)

SACRAMENTO, Calif. (AP) — A federal judge on Monday ordered that all employees entering California prisons be vaccinated or have a religious or medical exemption, as he tries to head off another coronavirus outbreak like the one that killed 28 inmates and a correctional officer at San Quentin State Prison last year.

Inmates who want in-person visits or who work outside prisons, including inmate firefighters, must also be fully vaccinated or have a religious or medical exemption.

The prison guard's union said it may appeal the mandate.

More than 50,000 California inmates have been infected and at least 240 have died since the start of the pandemic.

“All agree that a mandatory staff vaccination policy would lower the risk of preventable death and serious medical consequences among incarcerated persons,” wrote U.S. District Judge Jon Tigar. “And no one has identified any remedy that will produce anything close to the same benefit.”

He said state officials “have taken many commendable steps” but he is acting “because they refuse to do what the undisputed evidence requires.”

Tigar has broad authority to direct medical care within California prisons under a long-running lawsuit over over poor health care. He accepted the recommendation of his federal receiver, J. Clark Kelso, who has operational control.

“Once the virus enters a facility, it is very difficult to contain, and the dominant route by which it enters a prison is through infected staff,” the judge reasoned.

As of Monday, there were 218 active inmate infections, 129 of them at North Kern State Prison near Bakersfield. Wasco State Prison in the same county had 32 infected inmates, but only one other prison has double-digit infections.

Statewide, there were 357 active employee infections; 39 employees have died, including three this month.

The California Correctional Peace Officers Association has said the mandate could create staff shortages if employees refuse to comply.

“We’ve undertaken an aggressive, voluntary vaccination program and we still believe the voluntary approach is the best way forward. We are looking into our legal options to address this order,” union President Glen Stailey said in a statement.

Rita Lomio, an attorney with the nonprofit Prison Law Office that sought the order, said she doesn't see a plausible ground for the union to appeal the mandate because there is "such a clear factual and legal basis for it.”

Colorado, Illinois, Oregon, Massachusetts, Washington, Nevada, New Mexico and all federal prisons already have similar mandates, she said, but California was the first to force a court order.

The move was opposed by the state's prison agency and Gov. Gavin Newsom, whose administration had ordered vaccinations or testing for all state employees, including correctional employees. Tigar’s order does away with the frequent testing option.

The administration is “evaluating the court’s order at this time to determine next steps,” corrections department spokeswoman Dana Simas said in an email. “We respectfully disagree with the finding of deliberate indifference, as the department has long embraced (voluntary) vaccinations” and was one of the first to provide them to vulnerable inmates and staff at the end of last year.

Tigar said that includes about 42% of correctional officers systemwide, but vaccination rates vary and is just 18% at one prison. At several prisons, rates among all employees are in the 30% range, he said.

The judge gave Kelso and prison officials two weeks to say how they will comply with his order. He also told Kelso to consider other ways to increase the inmate vaccination rate, including a possible mandatory vaccination policy for all prisoners.