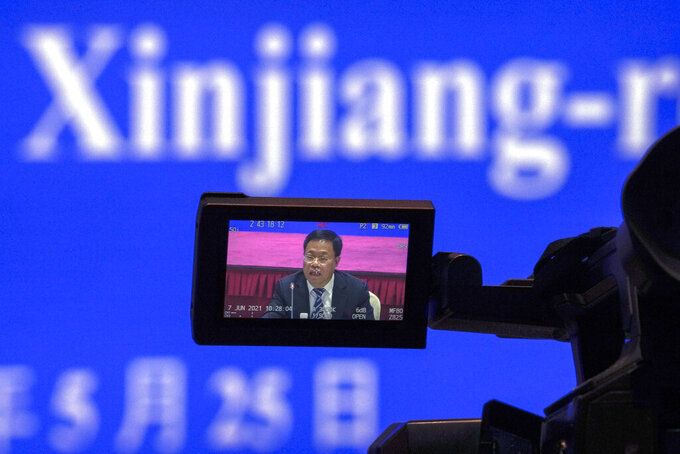 Andy Wong, ASSOCIATED PRESS
Xu Guixiang, a spokesperson for the Xinjiang northwestern region’s government, speaks during a press conference related to Xinjiang issues at the Xinjiang Tower in Beijing, Tuesday, May 25, 2021. China on Tuesday denounced a people’s tribunal planned for the UK over allegations of genocide being committed against Uyghurs and other Turkic Muslim people in the Xinjiang region. (AP Photo/Andy Wong)

BEIJING (AP) — China on Tuesday denounced plans for a people’s tribunal in Britain on allegations of genocide against Uyghurs and other Turkic Muslim people in China's Xinjiang region.

The spokesman for the northwestern region’s government, Xu Guixiang, said China “condemned and despised” the hearings, which are expected to draw dozens of witnesses when they begin in early June.

The tribunal, which does not have government backing, is to be chaired by prominent lawyer Geoffrey Nice, who led the prosecution of ex-Serbian President Slobodan Milosevic and worked with the International Criminal Court.

“This is a total violation of international law and order, a serious desecration of the victims of real genocide, and a serious provocation to the 25 million people of all ethnic groups in Xinjiang,” Xu told reporters at the latest in a series of briefings in Beijing intended to counter growing criticism of China's policies in Xinjiang.

The region has become a major foreign policy headache for China, which is accused of locking up more than a million Uyghurs, Kazakhs and members of other minority groups in re-education camps where they are forced to denounce their traditional culture and swear fealty to China’s ruling Communist Party and its leader, Xi Jinping.

Women from the region have also testified that they have been forced to undergo contraceptive measures, children have allegedly been taken from their incarcerated parents and claims of forced labor have prompted multinational companies to cut ties with Xinjiang's key cotton industry.

China says it has merely been providing job training and counseling to de-radicalize those influenced by jihadist propaganda following years of violent outbursts against Chinese rule in the region.

While the tribunal’s judgment is not binding on any government, organizers hope the process of publicly laying out evidence will compel international action to tackle the alleged abuses in Xinjiang.

Former U.S. Secretary of State Mike Pompeo declared before he left office that China’s policies against Xinjiang’s Muslims and ethnic minorities constituted crimes against humanity and genocide. His successor, Antony Blinken, reiterated the statement on his first day in office.

The Associated Press reported last year that the Chinese government was systematically forcing sterilization and abortion on Uighur and other Muslim women, and sent many to camps simply for having too many children.