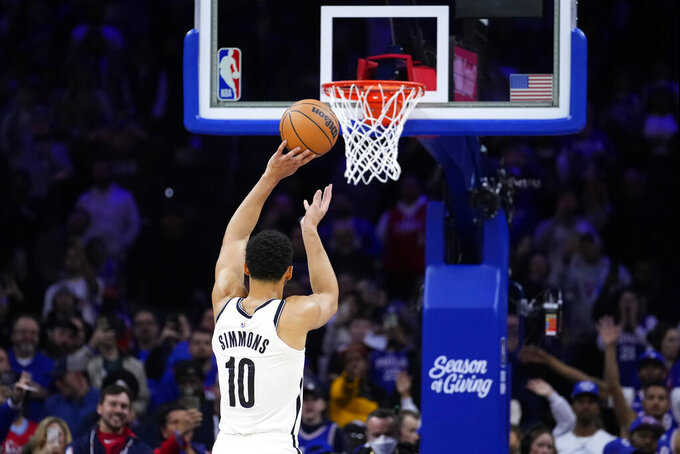 Maybe not as loudly as the Nets guard expected, but one of the most reviled former players in Philadelphia’s sports history was jeered from warmups to the final horn in his first game in the city since his former team acquiesced to his trade demand in February.

The undermanned 76ers were the ones that turned the game into a laugher. Simmons had 11 points, 11 assists, seven rebounds and went scoreless in the fourth quarter of Brooklyn's 115-106 loss to Philadelphia on Tuesday night.

Oh yes, Sixers fans cursed, they turned old No. 25 jerseys into art projects, and the scorned faithful mostly let the mercurial guard have it for their belief he turned his back on the franchise that made him the No. 1 pick in 2016.

“I can’t worry about everyone’s feelings,” he said.

Simmons played his first game in Philadelphia since a Game 7 loss to Atlanta in the Eastern Conference semifinals on June 20, 2021. He passed up a wide-open tying dunk late in that game, triggering passive criticism from coach Doc Rivers and Joel Embiid that unraveled the relationship. Simmons also had back issues and later said mental health woes played a role in his trade demand in the summer of 2021 that led to a contentious few days in training camp. Simmons was sent home for good, filed a grievance after the Sixers said he breached his contract (it was later settled in a confidential agreement) and then was shipped to Brooklyn in a trade for All-Star James Harden.

Embiid and Harden sat out Tuesday night with injuries, as did Tyrese Maxey, the genial guard who became an instant fan favorite as Simmons' replacement.

Simmons, who watched from the bench as he recovered from a back injury when the Nets played in Philly in March, insisted at shootaround he had no hard feelings toward Embiid and other former teammates.

“We had a lot of highlights. We had lot of great times,” Simmons said. “I got a lot of love for Jo, too. Obviously, didn’t work out. That’s life. Not everything works out in your favor.”

Ask if he might seek out Embiid, Simmons cracked, “Yeah, we’re going to do our secret handshake.”

The trio of sidelined Sixers starters made the nationally televised game a bit anticlimactic.

Well, at least on the court. Philadelphia’s starting lineup of Tobias Harris, P.J Tucker, Montrezl Harrell, De’Anthony Melton and Shake Milton was not what most fans who listed lower-level tickets in the $900 range expected when they listed this one.

Booing Simmons about made it worth any price.

Hey, at least the local duct tape business was booming. Sixers fans needed only a Sharpie and the adhesive to salvage their old No. 25 Simmons jerseys. Most fans wrote some kind of profanity on the tape — one hopeful fan waiting in a penned-off area before the concourse opened had his vulgarity ripped off by a security guard — while one went deep into the great Philly insult well and wrote “Crumb Bum ” over Simmons' name.

“I think I did some things in Philadelphia that can be respected and appreciated,” Simmons said. “I don't think we all had bad times.”

It wasn’t all loathe and basketball in the City of Brotherly Love.

Sydney Reiver of Cherry Hill, New Jersey, held a sign from the third row that read “ BEN IM UR #1 FAN, PLEASE SIGN MY JERSEY” and caught the guard’s attention after warmups. Simmons walked toward the stands and posed for a photo with the teenager wearing his Brooklyn No. 10 jersey. She had missed out on meeting him when he played in Philadelphia and decided to send him a direct message on Instagram that she would be at the game. The 14-year-old ninth-grader said she “was upset” when Simmons was traded but thrilled she finally met her favorite player.

Sydney attended the game with her dad; the family has had season tickets for 41 years.

“It was just nice to see I have support in Philadelphia, still,” Simmons said. “Lifelong fans do support me. That was really cool to see. It's nice to see.”

Simmons had more friendly faces in Brooklyn’s locker room, a point Vaughn has made with the three-time All-Star. Whatever the outcome, Simmons has a home with the Nets.

“It was one step in the right direction for me,” Simmons said. “I think it was a good experience.”