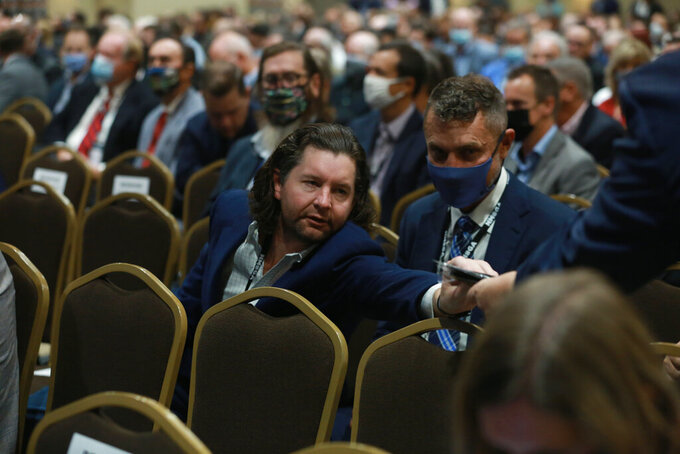 Cedar Attanasio, ASSOCIATED PRESS
An attendee at the annual meeting of the New Mexico Oil And Gas Association reaches for a mask after the crowd was reminded to wear them by the state's governor, Monday, Oct. 4, 2021, in Santa Fe, New Mexico. Democratic Gov. Michelle Lujan Grisham addressed the crowd while moving to crack down on pollution from gas extraction. She's also trying to shield producers from a drilling moratorium by the Biden administration. New Mexico relies on oil and gas royalties for around one third of its budget. (AP Photo/Cedar Attanasio)

SANTA FE, N.M. (AP) — New Mexico’s Democratic governor is seeking legislation to help jump-start hydrogen production from natural gas in her state, a process that generates harmful greenhouse gases but could one day be harnessed to provide environmental benefits.

Gov. Michelle Lujan Grisham outlined the effort briefly at a convention of oil executives Monday in a speech that acknowledged the state’s reliance on industry tax revenue while pledging to enforce pro-environment regulations.

It’s the latest tightrope walk for the governor who has promised action on climate change while also working to shield the state’s oil and gas producers from a federal drilling moratorium on public lands issued by fellow Democrat President Joe Biden.

Lujan Grisham's first message to the executives was to put on their masks, citing her own emergency regulations issued weeks ago in response to the surge of the delta variant of the coronavirus.

She paused while some 300 attendees complied, before launching into a 20-minute speech thanking oil and gas producers for their contributions to the economy and tax revenues that form the backbone of state education funding.

She pledged to kick-start the hydrogen fuel industry in New Mexico with legislation in February.

“We are working on that as we speak,” Lujan Grisham said, adding that it’s part of an effort to turn New Mexico into a hydrogen fuel “hub.”

The bill could include taxes and incentives for energy producers to produce hydrogen, legal frameworks to facilitate production and storage, refueling corridors for truck traffic and training programs for workers in the industry.

“The Hydrogen Hub Act will continue (to) help us reach our ambitious climate goal of decreasing greenhouse gas emissions by at least 45% by 2030 — and boost our economy in the process,” said New Mexico Environment Department spokeswoman Kaitlyn O’Brien.

Like electric car batteries, hydrogen fuel cells emit no carbon dioxide when used. But electric cars, like the growing number of hydrogen vehicles including forklifts, are only as “green” as the energy used to power them.

Most energy used to produce hydrogen currently comes from natural gas, according to the U.S. Department of Energy, and directly contributes to the pollution that causes. But supporters of the technology, including Biden, see it as a pathway to reducing carbon emissions as it becomes more environmentally safe.

New Mexico’s first large-scale hydrogen project describes itself as “blue” — the result of a process that applies heat and steam to methane in natural gas to create hydrogen . A recent study by Cornell and Stanford universities found the process generates 20% more carbon emissions than burning natural gas or coal for heat.

In what could have been an applause line for an industry with few friends in the White House, Lujan Grisham said she’s advocating for them at the highest level.

“We continue to have conversations with the Biden administration to make sure that they understand the critical importance of this industry in our state,” the governor said.

But like most of the speech, it was met with a silent buzz of ceiling lights and an occasional cough.

In March, Lujan Grisham wrote Biden asking to exempt New Mexico from an executive order halting gas and oil production on federal land. She argued the move would push hydrocarbon mining to Texas, which shares a border above ground and the oil-rich Permian Basin beneath it.

But Lujan Grisham describes herself as a “stakeholder” of the industry, not necessarily a friend.

She pledged to restrict methane emissions at drilling sites and continue enforcing regulations requiring reduced use of freshwater and thorough cleanups of environmental spills.

The speech made no mention of an oil spill currently coating the coast of California, or the record fires made worse this summer by global warming.

The governor will have to walk another tightrope in February when pro-environment legislators from the state’s growing progressive wing will have a chance to weigh in on the hydrogen legislation, and New Mexico Oil and Gas representatives will too.

For many environmentalists, the governor’s methane rules and support for hydrogen don’t go far enough, fast enough, to curb global warming. Student protesters have started to picket the governor’s events and office.

A handful of student climate activists blocked hotel doors after the governor left Monday's event. They sang and held a sign that read “Whose side are you on?”

Back in the convention hall, most of the oil and gas executives took off their masks immediately after the governor left.