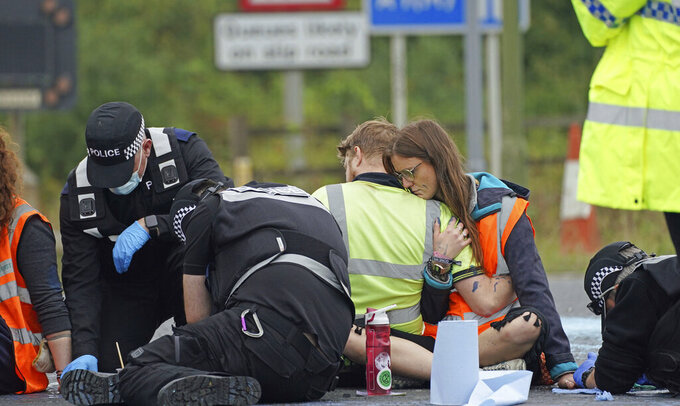 Steve Parsons, ASSOCIATED PRESS
Police officers work to free protesters from Insulate Britain who had glued themselves to the highway, at a slip road at Junction 4 of the A1 motorway, near Hatfield, England, Monday, Sept. 20, 2021. Protesters are demonstrating for the government to insulate every home in Britain to tackle climate change and fuel poverty. (Steve Parsons/PA via AP)

LONDON (AP) — Environmental protesters pressuring the British government to insulate all homes within a decade apologized on Monday for their role in bringing another day of traffic chaos to London's major ring road but said the road blocks would continue unless a dialogue opens up.

For the fourth time in little more than a week, the “Insulate Britain” protesters targeted the M25, one of the country's busiest highways, blocking entry roads by gluing themselves to the road and painting the name of their group on the road as well as a blue heart.

The group says it wants the Conservative government to insulate "all of Britain’s 29 million leaky homes by 2030, and all social housing by 2025,” a policy that it says will pay dividends in the urgent battle against climate change.

Chief Superintendent Nick Caveney from the Hertfordshire Constabulary, which made a further 29 arrests Monday for a total of 76 overall, warned of more traffic misery ahead and said police were doing everything they can to stop the protests before they cause traffic chaos.

Other police forces around the 117-mile (188-kilometer) ring road have also made dozens of arrests. Kent Police said Monday that a dozen protesters were arrested at the Dartford River Crossing, east of the British capital, on suspicion of conspiracy to cause a public nuisance before they were able to gain access to the road.

In an open letter to Britain’s interior minister, Priti Patel, the activist group said it wanted to “profoundly apologize for the disruption” and offered to call off the campaign if the government opened up a dialogue.

“We cannot imagine undertaking such acts in normal circumstances,” Insulate Britain said in the letter. “But we hope you will find it within yourself to come and meet with us in open dialogue, not so that we can agree but more that we can understand our differences. As soon as we have a meaningful statement we can all trust, we will immediately call off the campaign. That is all we ask.”

Although dozens of protesters have been arrested over the four demonstrations, police are being urged to take swifter action to end the protests.

“And no, I don’t think these people do any favors to their cause. I think that what they do is detract from a very important moral mission that is widely shared now by the people of this country," he added.

Johnson is in New York to help eke out climate commitments from countries around the world ahead of Britain's hosting in November of the 26th global U.N. Climate Change Conference of the Parties, or COP26, in the Scottish city of Glasgow.

Follow all AP stories about climate change issues at https://apnews.com/hub/climate.