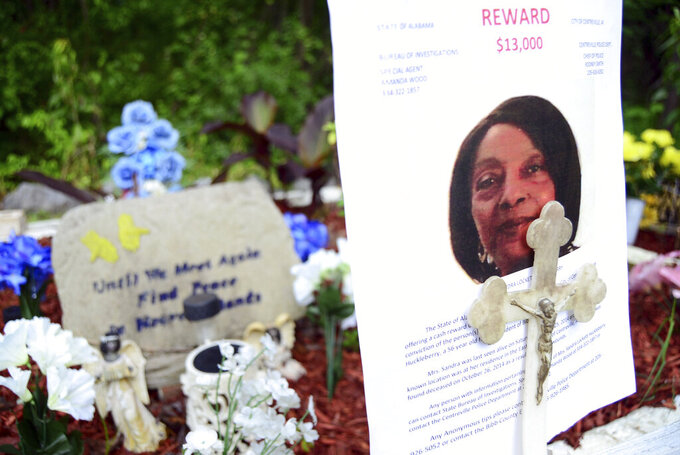 Emily Enfinger, ASSOCIATED PRESS
A memorial flower garden for Sandra Lockett Huckleberry is located at the corner of Chestnut St. and SW Davidson Drive in Centreville, Ala. Huckleberry, 56, was found dead inside her Fair Avenue mobile home in Centreville after church services one Sunday in October 2014; she had been stabbed several times. The life of this kind-spirited woman ended violently, leaving only questions that would torment her family ever since: Who killed her and why? (Emily Enfinger/The Tuscaloosa News via AP)

CENTREVILLE, Ala. (AP) — There aren’t many photos of Sandra Lockett Huckleberry, her sisters say, since she didn’t like her picture to be taken.

But her image is still seen in Bibb County’s Centreville and nearby areas, especially around October, when reminders of her homicide reappear on fliers that feature her portrait, which was cropped from a group photo of her with her sisters.

Family and caring for other people were two main passions in Huckleberry’s life. She is one of 13 siblings; eight sisters and five brothers. Although she didn’t have children herself, she would claim her nieces and nephews as if they were her own babies, family members say. She was also an outgoing person, her sisters said, who would go out of her way to help someone if they needed it.

But the life of this kind-spirited woman ended violently, leaving only questions that would torment her family ever since: Who killed her and why?

Huckleberry, 56, was found dead inside her Fair Avenue mobile home in Centreville after church services one Sunday in October 2014; she had been stabbed several times.

District Attorney Michael Jackson described the crime scene as “grisly,” in a news report published in the days after her body was discovered. Jackson serves the Fourth Judicial Circuit, which covers Dale, Hale, Bibb, Perry and Wilcox counties.

Homicides are an unusual occurrence in Centreville, according to Centreville Police Chief Rodney Smith. In fact, as of 2021, Huckleberry’s death is the only reported homicide in the small town since her death in 2014, Smith said.

Centreville has a population of fewer than 3,000 residents, according to the 2010 U.S. Census, with a police department where you can count the number of officers with your hands and still have a few digits to spare. But not all of the officers are full-time officers.

Smith was a patrol officer in 2014 and actually responded to the scene of Huckleberry’s homicide. Although he would not provide certain details on the case because it remains an ongoing investigation, Smith said that the manpower available to the Centreville Police Department and the unwillingness of people to come forward with information has posed challenges in solving the case. He said because of the lack of personnel, the investigation was turned over to the Alabama State Bureau of Investigation. Anytime Centreville police receive tips or information regarding the case, they hand it over to the state investigators.

Smith believes Huckleberry’s case is solvable, but a large part of being able to do that is if people come forward with what they know.

ANOTHER YEAR WITHOUT ANSWERS

Every year since Huckleberry’s death, her family holds a vigil in October to remind the community of what happened in their neighborhood with the hopes that answers will one day be brought to light.

The last one was held on a Tuesday evening. Family members and others who wished to attend gathered at a flower memorial garden for Huckleberry while the chalky, pastel-colored skies above Centreville faded into the night.

The garden is in a spot where SW Davidson Drive bends into Chestnut Street, a general area where Huckleberry’s family has lived for many years.

They traveled the distance from the memorial garden in a cavalcade of slow-moving vehicles and individuals on foot to the home where she was found killed, and then back to the memorial garden. The rest of the evening was spent singing songs at the memorial site and remembering Huckleberry.