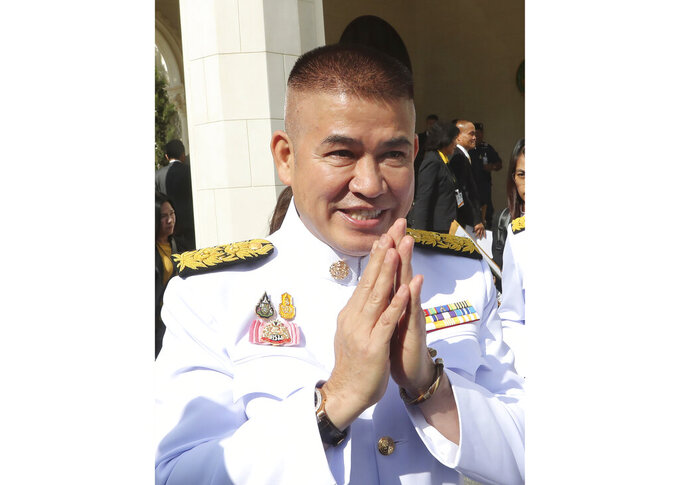 Sakchai Lalit, ASSOCIATED PRESS
FILE - In this Tuesday, July 16, 2019, file photo, Deputy Agriculture Minister Thammanat Prompao arrive for a group photo with his cabinet members at the government house in Bangkok, Thailand. Thammanat was reported to have plotted for Prime Minister Prayuth Chan-ocha to lose a parliamentary no-confidence vote last week, and was also controversial because he had been imprisoned for four years in Australia in the 1990s for his part in smuggling heroin into that country. (AP Photo/Sakchai Lalit, File)

BANGKOK (AP) — Thai Prime Minister Prayuth Chan-ocha sacked two Cabinet members on Thursday, including one who was widely reported to have unsuccessfully plotted for him to lose a parliamentary no-confidence vote last week.

Deputy Agriculture Minister Thammanat Prompao was deeply controversial even before the alleged mutiny attempt for being imprisoned for four years in Australia in the 1990s in a case involving heroin smuggling.

He has also faced other scandals, including a claim that his doctorate in public administration was fraudulently earned. He has rejected all accusations of wrongdoing.

Thammanat won his Cabinet position by being a political power broker capable of turning out the vote in northern Thailand for the governing Palang Pracharath party, and was made party general secretary in June. Because of his reputation, it isn't clear whether his dismissal will strengthen or weaken Prayuth's government.

Palang Pracharath is the military-backed party that nominated former army commander Prayuth as prime minister after the 2019 general election. Prayuth led a military government from 2014 to 2019 after staging a coup.

Deputy Labor Minister Narumon Pinyosinwat was dismissed along with Thammanat, according to an official notice published Thursday in the Royal Gazette. Thai media have reported that she also was involved in last week’s failed plot against Prayuth, which neither the prime minister nor Thammanat publicly acknowledged.

Prayuth and five members of his Cabinet defeated censure motions against them, steadying the government despite its continuing unpopularity for failing to secure adequate supplies of coronavirus vaccines.