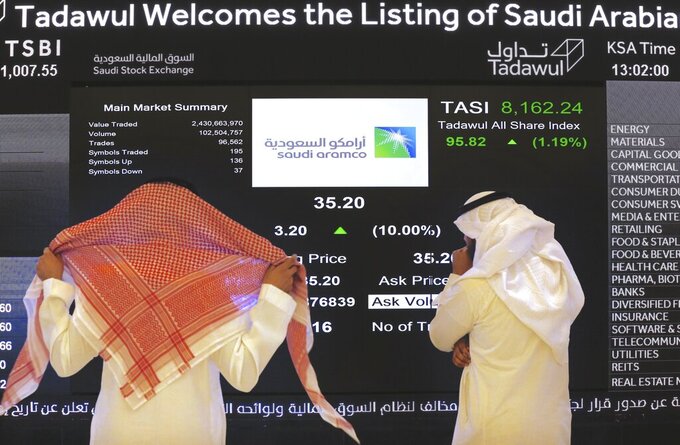 Aramco touched the $2 trillion market cap moment during the day, but ultimately closed at $1.99 trillion, or what is 37.3 riyals ($9.95) a share. It hasn't reached this peak in trading since December 2019, days after the company's debut on the Saudi stock exchange.

Aramco now ranks third behind Microsoft and Apple as the world's most valuable company, far exceeding the combined value of some of the world's biggest oil companies.

The rally for Aramco comes as Brent crude oil prices climb to around $82 a barrel, the highest in seven years. Demand for energy is picking up, despite the ongoing coronavirus' continued toll on travel and other key gasoline-guzzling sectors.

Aramco, which produces Saudi Arabia's oil and gas, is closely watched by energy traders and insiders because of both its size and importance to world energy markets. The company is almost entirely owned by the government of Saudi Arabia, with just under 2% of Aramco publicly listed on the Saudi Tadawul stock exchange.

Despite fluctuations in Aramco’s yearly earnings, the company has stuck to its promise to pay an annual dividend of $75 billion until 2024 to shareholders, the biggest of which is the government.

Crown Prince Mohammed bin Salman was the force behind the government's effort to publicly list a sliver of Aramco in late 2019, touting it as a way to raise capital for the kingdom’s sovereign wealth fund. He says the aim is to use that capital to then develop new cities and mega-projects across the country that create private sector jobs for young Saudis entering the workforce.

Ultimately, the crown prince is aiming to diversify the Saudi economy away from its reliance on oil for revenue as talk of energy transition, climate change concerns and sustainability take on increasingly urgent global attention.

Demand for oil is forecast to hit 99 million barrels per day by the end of the year, and a little over 100 million per day next year.

“We are satisfied that the worst is over,” OPEC Secretary-General Mohammed Barkindo said Wednesday during the virtual Energy Intelligence Forum.

The oil cartel, led by Saudi Arabia, and other allied major oil producers. led by Russia. said this week they are maintaining a gradual approach to restoring production levels that had been slashed during the pandemic, agreeing to add only 400,000 barrels per day in November.

Their meeting on Monday lasted “a record 25 minutes,” Barkindo noted.

Also speaking at the virtual Energy Intelligence Forum was Iraq's Oil Minister Ihsan Ismaeel. He said oil prices that reach $120 a barrel would be great for his country, which is heavily reliant on oil exports, but he acknowledged that such a cost is not sustainable. He said a range of between $75-$80 a barrel would be a “fair price” for both producers and consumers.

While higher oil prices bode well for some producers, White House National Security Adviser Jake Sullivan raised concerns about rising prices when he met with top Saudi officials, including the crown prince, in a visit to Riyadh last week that focused on a range of issues. The White House has said it wants to ensure gas prices are kept down for the American public.